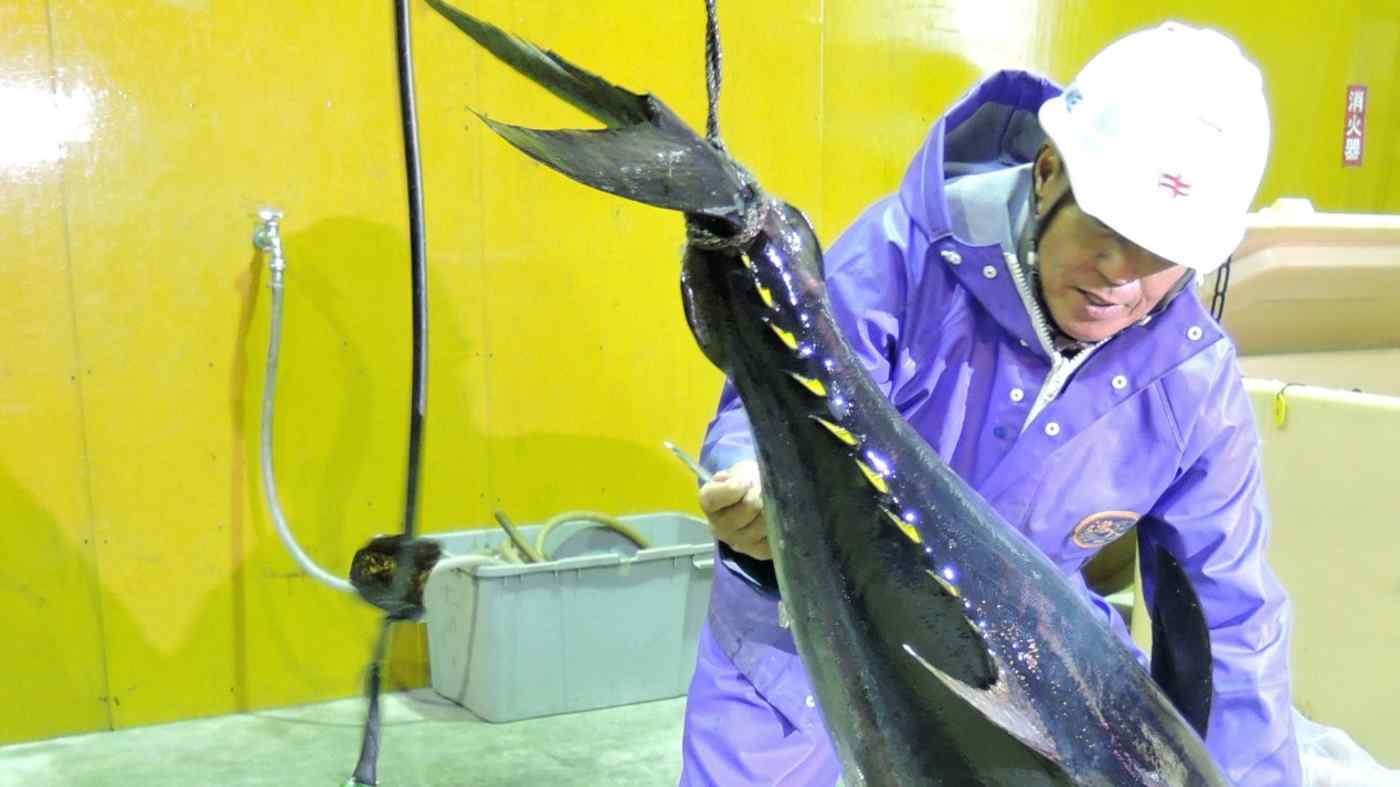 A worker at a joint venture between Kyokuyo and Feed One in Ehime Prefecture prepares to ship a fully farmed tuna.
HIROKI MINAI, Nikkei staff writerSeptember 17, 2018 21:19 JST | Japan
CopyCopied

TOKYO -- Fully farmed bluefin tuna offers the best of both worlds to sushi fans: delicious food without depleting tuna stocks and threatening the survival of the species.

Several companies in Japan are perfecting the techniques for farming tuna bred from eggs, and they have reached the point now where they can begin to expand exports and service other markets besides Japan.

For example, Maruha Nichiro will soon begin exports to the European Union, and seafood distributor Kyokuyo is adding Europe to a menu that now includes exports to the U.S.

Japan proposed increasing the fishing quotas for Pacific bluefin tuna at a meeting of an international committee earlier this month, but the committee rejected the proposal and left the catch unchanged, reflecting worries about the threat posed by the global sushi boom to natural tuna stocks.

Against this backdrop, Europe's broad interest in environmental protection has prepared the ground for the acceptance of fully farmed tuna as a responsible menu option.

Fully farmed tuna are tuna bred from eggs spawned by tuna themselves artificially hatched. Kinki University reported the world's first full-cycle farmed tuna in 2002 and began sales in 2004. After that, other companies entered the business including Maruha Nichiro and marine products giant Nippon Suisan Kaisha.

The growing interest in fully farmed tuna is only natural. Most farmed tuna is produced by capturing juvenile fish at sea and fattening them in pens. In Japan, farming accounts for some 30% of all supplies of bluefin, considered the best of the tunas. But catching juveniles leads to depletion of tuna stocks, just as with adults, so Japan has imposed restrictions on any further expansion of tuna farming facilities using wild juveniles. A tuna farming site in Kagoshima Prefecture in southern Japan.

Maruha Nichiro has bases for fully farmed tuna in Saiki, Oita Prefecture, and in Kushimoto, Wakayama Prefecture. Both operations have been certified as safe for exports to Europe and the company plans to begin by shipping tuna to the Netherlands starting within the year.

Maruha Nichiro shipped roughly 300 tons of fully farmed tuna in fiscal 2017, generating sales of 900 million yen ($8.05 million). The company has figured out ways to increase the survival rate of juveniles reared from eggs and expects the business to become profitable in fiscal 2018, giving it reason to begin exports. Europe was chosen because it is in the midst of a Japanese food boom, according to company executive Akira Ito.

Kyokuyo and Feed One, a supplier of formula feed for livestock and fisheries, set up a company in 2012 to produce fully farmed tuna, and now the two co-parents are ready to expand exports using their separate sales channels. The two companies expect to ship a combined total of about 35 tons of the tuna to the U.S. in fiscal 2018, but going forward Feed One intends to target Singapore and other markets of Asia, while Kyokuyo will set its sights on Europe.

It was thought that farmed tuna would not eat formula feed, but Feed One developed a feed for tuna, and Kyokuyo provided the technical wherewithal to farm the fish. Farmed tuna also need foods like mackerel and sardines to grow, but if formula feed can account for a larger percentage of the diet, that will help protect these other fish resources in the wild. "Distributors overseas like the idea because they care about wildlife conservation," explained Kyokuyo President Makoto Inoue.

The problem with tuna fishing is that it threatens conservation by capturing tuna before they have a chance to breed. According to a fisheries white paper, the global catch of bluefin tuna was less than 50,000 tons in 2016, which is just half of the peak.

Recent restrictions have helped restore stocks, which is why Japan proposed a 15% increase in the quotas allotted to individual nations at the meeting of the northern committee of the Western and Central Pacific Fisheries Commission held in early September in Fukuoka.

However, the U.S. and other nations were against the proposal and the quotas were left unchanged.

This emphasis on marine conservation creates business opportunities for fully farmed fish. In the Netherlands, where the Aquaculture Stewardship Council is located, more and more supermarkets are stocking certified marine products. To gain certification, the producer must prove that farming does not impact the surrounding ecosystem. In Japan, retail giant Aeon is already selling some kinds of ASC certified fish. The ASC has not certified any tuna yet, but companies like Maruha Nichiro hope to win that stamp of approval for their fully farmed tuna and use that to expand regional sales.

In Japan, fully farmed tuna retails for about 3,000 to 3,200 yen per kilogram, which is around 15% higher than regular farmed tuna. The higher price is partly because of the higher costs. Shipments of fully farmed tuna exceeded 1,000 tons in 2017 for the first time, but that accounted for less than 10% of the total shipments of farmed tuna, according to the Fisheries Agency.

What is needed to send this market into orbit is a boost in production coupled with the support of consumers interested in resource conservation.