TOKYO -- Low-cost virtual restaurants are opening across Asia, fueled by a multibillion-dollar boom in food delivery that has emboldened entrepreneur chefs daunted by the risk associated with going into business.

China, India, Japan and other countries in the region have seen a rise in these "ghost" restaurants, which have no storefronts and serve only by delivery. The high investment costs and failure rates associated with sit-down restaurants, as well as worker shortages, have made the takeout-only format increasingly attractive.

Data shows that Asian families are increasingly reluctant to leave their houses to eat. While the Asian market for restaurant dining grew by some 10% a year between 2006 and 2016, this is expected to fall to 7.5% over the decade to 2026, according to commercial property consultants Cushman-Wakefield.

Ghost restaurants -- or shared kitchens -- are tapping into this trend. In China, where food delivery is growing at the fastest pace in a market already worth $37 billion, these virtual restaurants are expanding rapidly.

Beijing-based Panda Selected, a shared kitchen operator, says more than 500 businesses have embraced its service described by many as "WeWork for restaurants." Booming demand has driven the company to open 103 shared kitchens within three years across Beijing, Shanghai and two other major cities.

"Shared kitchens have boomed in China because Chinese families are used to food delivery," CEO Li Haipeng said in a video posted on the company's website.

Restaurants that exist solely online became a phenomenon in U.S. cities like New York and Chicago a few years ago, especially after delivery services like Uber Eats and GrubHub debuted. Now that movement has reached Asian cities.

Consumer research company NPD Group says 63% of Chinese people use websites and apps for food delivery, compared with 36% in Japan and just 27% in South Korea, highlighting China's willingness to use the internet to order easy food. 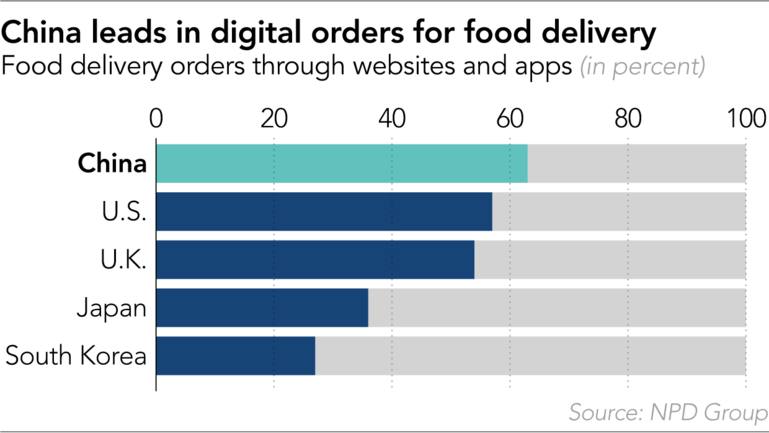 With fewer Chinese consumers dining outside, Li said it makes more business sense for restaurants to cook at a rented kitchen and serve customers through delivery apps.

Li claims the streamlined operation allows clients to make an average profit margin of 20% compared with 10% for conventional restaurants.

"As long as China's desire for food delivery continues, the demand for shared kitchens will only grow," he said.

His three-year old company has raised $70 million in investment and counts A-list venture company Tiger Global as its backer, according to Crunchbase.

The market potential for shared kitchens in China also has whetted the appetites of international players. Travis Kalanick, the founder of ride-hailing company Uber, has been considering bringing his Los Angeles-based CloudKitchens venture to China, with a plan to provide real estate, facility management, technology and marketing services, the South China Morning Post recently reported.

The movement appears to be gaining steam in India as well, especially in urban centers where tech-savvy millennials are comfortable ordering food online.

Uber Eats announced a partnership with Indian chain Cafe Coffee Day in October to launch a network of delivery-only virtual restaurants. Jason Droege, vice president of Uber Everything at Uber Technologies, said then that the pair would use lessons learned in virtual eateries globally to boost growth opportunities for their Indian restaurant partners.

The U.S. company will leverage Cafe Coffee Day's expertise in the food and beverage business, as well as its vast network of over 1,700 outlets across India. Uber Eats will provide data, analytics and insights on customer preferences.

Popular ghost restaurant BOX8, founded in 2012, serves over 22,000 desi or Indian meals daily across cities such as Mumbai, Pune and Bangalore in an easy-to-carry box, the company says on its website. Others seeking a slice of the pie include Curry Me Up and Kadhai House.

Meanwhile in Japan, startup Sentoen plans to open co-cooking space Kitchen Base next month in Tokyo's Meguro area. The four independent kitchens will enable eight deliver-only restaurants -- four operating during the day and four at night -- to prepare dishes for a monthly fee of 100,000 to 150,000 yen ($900 to $1,300).

"Initial investment costs will be below 500,000 yen, whereas if you tried to open up an actual store, it would cost at least 10 million yen," Sentoen CEO Daisuke Yamaguchi said. The company has received over 30 applicants, and is examining their planned menus.

More than 80% of people who want to open a restaurant are unable to do so, according to a study by Japan Finance Corp. and the Small and Medium Enterprise Agency. Lack of money ranks as the number one reason.

Industry exit rates are also high, with 55,000 eateries going out of business every year.

"It will be easier for people to take a chance if it's a ghost restaurant, and I hope to support those people by expanding Kitchen Base," Yamaguchi said. The CEO plans to roll out about 100 share kitchens within three years in Tokyo, Osaka and elsewhere in Asia.

"Regions with high delivery rates, like China for example, will be great candidates," Yamaguchi said.

"I wanted to start the restaurant business quickly with low costs and without taking much risk," said Aya Hirose, corporate manager of the restaurant's operator, Newpeace.

Hirose and her staff rented a space in December 2017.

"It was a good experience because we were able to learn how to operate -- like how big of a kitchen or fridge we needed," she added.

This knowledge and experience led to her September opening of 6curryKitchen, a members-only restaurant where customers pay 3,000 yen monthly for a daily plate of curry.

"Starting as a ghost restaurant is not only beneficial cost-wise, it also gets your name out there and definitely helped us receive recognition before opening a restaurant," Hirose said.

The company is now looking to expand to Taiwan.

"We are planning to start a ghost restaurant in the region sometime this year," she said. "We will rent a place and run our curry restaurant as well as do delivery." At 6curryKitchen, curry lovers gather around the table for good food and a fun time.   © Provided by courtesy of company Newpeace

Nokisaki runs an internet platform that matches small merchants with commercial landlords. Together with Yoshinoya Holdings, a major beef bowl chain operator, the company started the Nokisaki Restaurant website, where aspiring entrepreneurs are matched with owners of restaurants and bars with unused space.

For example, an individual can rent a space and operate a burger joint during the day, but at night the restaurant vanishes and the owner operates a bar.

Michiya Yamazaki worked as a chef at home and abroad, and always hoped to open his own place.

"I didn't have enough money," he said, "and although I know how to cook, I didn't have any knowledge or confidence about running my own business."

But Yamazaki saw the opportunity when he found Nokisaki's matching platform. He visited four stores that were looking for someone to rent during the day.

In December, Yamazaki opened his Cuban sandwich shop -- called G'day mate! -- in Tokyo's Shibuya ward. He runs the kitchen from noon to 5 p.m., while the space operates as a bar at night.

"I was able to spend one-tenth of the money I would have needed for actually opening my own shop," Yamazaki said as he prepared 20 takeout orders. Michiya Yamazaki runs a Cuban sandwich shop called G'day mate! during the day in Tokyo. The site becomes a bar at night.

Nokisaki now has over 200 restaurants waiting to be rented, and more than 100 people looking for a business home.

"Ghost restaurants will continue to grow, especially in Japan," Nokisaki founder Akiko Nishiura said. "With the population aging, many old restaurant owners wish to shorten operation hours or might have to close their stores for a certain amount of time due to health reasons. Renting out their space will be a great way to earn additional income."