IT company NTT Data announced on Dec. 4 a new performance-based pay system aimed at attracting high flyers in the fields of artificial intelligence and the internet of things.

Keiichiro Yanagi, NTT Data's senior executive vice president, indicated that annual salaries will likely range between 20 million and 30 million yen ($177,300 and $266,000), putting them on par with those of its top executives and similarly qualified employees at overseas companies.

There will be no upper limit on the performance-linked component of the pay package, so annual salaries could conceivably exceed 30 million yen. The company's average salary is about 8.2 million yen.

Japanese chat app provider Line is also upping its offers to skilled young IT prospects, promising between 10 million and 20 million yen annually. E-commerce platform Zozo announced a plan in April to pay its tech wizards up to an eye-watering 100 million yen a year.

Sectors other than technology are also in the hunt for talent. Fast Retailing, operator of casualwear retailer Uniqlo, is hiring more IT staff to upgrade its logistics and demand-forecast systems, even looking to Silicon Valley and other overseas locations to find engineers. A recent posting on a jobs website by the company advertised salaries of up to 20 million yen for IT staff, far above those extended to job seekers in its other departments. 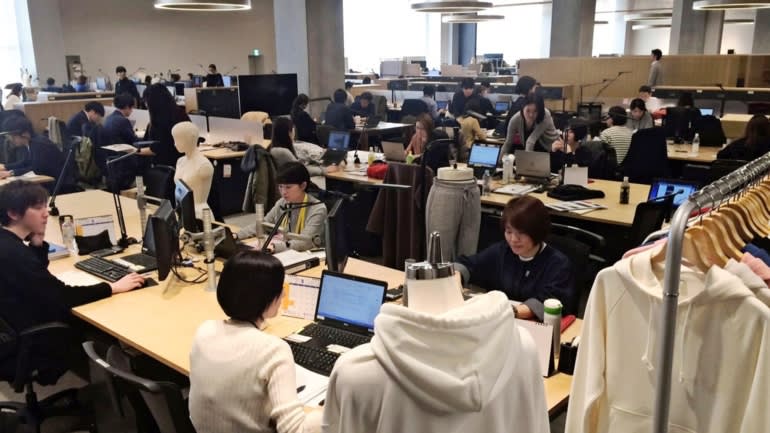 Fast Retailing, operator of Uniqlo, whose office is shown above, is offering annual salaries of up to 20 million yen for IT staff.

By 2020, Japan will face a shortage of about 48,000 engineers in areas like artificial intelligence and internet of things, according to the Ministry of Economy, Trade and Industry. The shortage is so acute that in 2016, Toyota Motor set up an AI-focused subsidiary in the U.S. James Kuffner, former head of Google's robotics division, was among a number of renowned researchers who joined the company, which now employs about 300 people.

Meanwhile, IT wages continue to soar. People switching jobs in the field are seeing their annual salaries jump 19% on average compared to those of job hoppers three years ago, according to employment agency JAC Recruitment. This is well above the all-industry average of 11%.

A JAC official said that since the summer of 2017, more companies -- mainly IT startups -- "have tacked on about 1 million yen to the normal salaries [of experienced engineers]."

Foreign companies are also fighting for well-qualified people. Some senior engineers at Google and other U.S. tech companies earn $300,000 to $350,000 annually, including bonuses, with star performers raking in over $500,000.

These mammoth salaries dwarf those of many Japanese companies, which are hamstrung by rigid wage systems. To cope, some companies are dangling incentives, such as giving new hires more authority and greater freedom.

In 2017, SoftBank Corp. introduced a Super Flextime System, which eliminates core working hours and allows employees to come and go mostly as they please. The system applies to about 10,000 employees.

Many human resource professionals believe that delegating more authority to workers and giving them a longer leash are essential to increasing motivation.

Manabu Shikauchi, who works closely with data scientists, said that tech companies "should consider putting skilled IT personnel in charge of recruitment." By letting them hire staff, businesses will bring on board people more closely aligned with project and company goals.