Makers turn to biodegradable plastics and other high-end paper alternatives With Japan the world's second-biggest producer per capita of plastic waste behind the U.S., local manufacturers are turning to biodegradable plastics and specialty paper products as an alternative to single-use plastic packaging.

"Many plastic makers seem to have taken countermeasures to curb plastic waste in the last year or so," said Kenji Fuma, founder and CEO of consulting company Neural, which advises Japanese companies on risk management and sustainability. "This is pretty late compared to many foreign companies."

In a significant step earlier this month, more than 180 signatory countries to the Basel Convention, which regulates the movement of hazardous waste, adopted new rules classifying dirty plastic as unsuitable for recycling, and included it on the list of waste products subject to control. This means that exporting countries will have to obtain prior consent from any country receiving its non-recyclable plastic waste products.

China already moved to ban almost all foreign plastic waste imports in 2017 in an effort to improve its environment, including air quality. Increased imports of plastic waste is pressuring Southeast Asian countries such as Vietnam, Thailand, Malaysia, and Indonesia to follow suit.

The rise of a new class of global institutional investors who allocate capital according to strict environmental, social and governance criteria is also forcing Japanese companies to reevaluate corporate strategy, driving a shift in business models.

"Major companies have only recently been opening up to innovation, as well as to partner with other companies or startups,'' said Shosuke Kiba, chief investment officer at Tokyo-based Universal Materials Incubator, a private investment company that aims to strengthen Japan's technological capabilities. "I believe a lot of new movements will emerge going forward."

Lack of demand over the past decade prompted many Japanese chemical and material companies to pause -- or even withdraw -- from developing biodegradable plastics. Kiba said UMI was focused mainly on those startups demonstrating a long-term commitment to environmental improvement.

"Biodegradable materials will be a key theme for major material and chemical companies from now on," Kiba said. 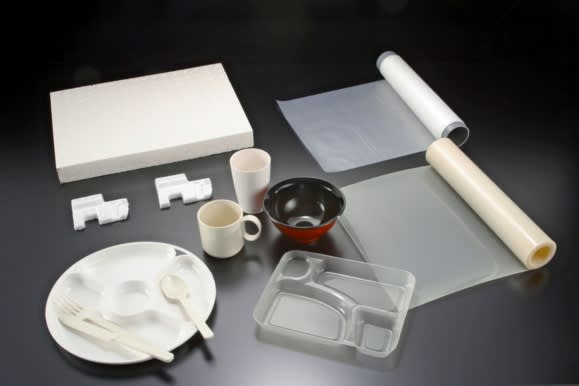 Products made from biodegradable plastic (Photo courtesy of Kaneka)

Mitsubishi Chemical Holdings has also been shifting from general-purpose products to high-grade products used for parts in electric vehicles, which require lighter and stronger plastics. "Investment for advanced materials is increasing," said a spokesperson for the company.

The company is also among 11 major Japanese chemical and material companies that have established a fund worth 6 billion yen ($55 million) in April to invest in material development startups around the world. The fund will have a maximum capital of 10 billion yen and will be operated together with UMI.

Japan's leading chemical and materials companies like Sumitomo Chemical, Shin-Etsu Chemical and Idemitsu Kosan are financing the fund. "By standing together, we can secure a certain scale of money to push advanced materials development forward," said a spokesperson for Mitsubishi Chemical.

Some restaurants and retailers have also begun to curb their use of plastic. Seven & I Holdings, parent of the Seven-Eleven convenience store chain, revealed this month plans to switch from plastic bags to paper bags by 2030. Food and hospitality provider Royal Holdings and Global Dining have also announced plans to stop using plastic straws at their restaurants.

Fukusuke Kogyo, Japan's largest plastic grocery bag supplier, is bracing for decreasing demand as consumers are soon expected to be legally required to pay for plastic bags. If this happens, "demand will decrease to one third or one quarter," a company spokesperson told the Nikkei Asian Review.

While Fukusuke Kogyo has been trying to lower production costs for conventional plastic bags, it has also increased investment in the development of advanced materials with lower environmental impact.

"We want to establish production of biodegradable plastic films, which is currently under development, as soon as possible to serve the needs of society," the company spokesperson said.

Nippon Paper is also hoping to capitalize on falling demand for plastics, expanding overseas sales of "paper-based barrier materials" that protect products against water and air. The company plans to start production in Finland within the year.

Struggling against falling demand for newspaper and other paper stock, Nippon Paper says it began seriously investing in advanced material about seven years ago.

At that time, the company said there were few customers looking for paper-based materials as a replacement for more cost-effective plastics. Now, more customers are expressing interest. But paper and paperboard still account for 70% of total sales.