SHANGHAI -- Chinese companies are following their foreign counterparts out of the country in search of alternative production bases to mitigate the impact of the prolonged trade war with the U.S.

Since last June, 33 listed companies have informed China's two stock exchanges of their plans to set up or expand production abroad, according to data compiled by the Nikkei Asian Review.

As with foreign manufacturers, U.S. President Donald Trump's multiple rounds of tariffs on Chinese goods, combined with rising wages and other costs, are prompting Chinese companies to move out of the country.

Nearly 70% of the 33 companies cited Vietnam as their preferred destination, while the remaining chose Cambodia, India, Malaysia, Mexico, Serbia and Thailand.

Among those companies is Jinhua Chunguang, a rubber product maker, which announced on July 19 an investment of $4.35 million to set up a production base in Vietnam. This is in addition to its three existing plants in Malaysia and China. The company, based in Zhejiang Province near Shanghai, said the investment is a response to "changes in international environment," as well as part of global expansion plans.

Jinhua makes hoses used in vacuum cleaners, which are subject to President Donald Trump’s third round of punitive import tariffs imposed on Chinese goods worth $200 billion in the second half of 2018, citing unfair trade practices.

Zhejiang Henglin Chair Industry is also looking to Vietnam, where it acquired a Taiwanese-owned factory as part of a $48 million investment to accelerate its expansion.

"We will begin production in the second half of the year," an executive at the company told Nikkei at its factory in Anji county. Henglin counts Swedish furniture maker Ikea and Japan's Nittori among its clients.

Textile manufacturers have also decided to increase production in Vietnam, despite the growing concerns of garment companies already operating there.

Huafu Fashion announced in December it was investing 2.5 billion yuan ($362 million) to build a factory there. The rolled yarn maker said setting up a manufacturing facility in Vietnam will allow it to source cheaper raw material, reduce labor costs and avoid the tariff barrier.

China's nominal wage jumped by 44% to 6,193 yuan per month in the five years through 2017, according to data from the International Labor Organization. That is big compared to Vietnam's 30% rise, Malaysia's 28% and Mexico's 11% during the same period.

Rising costs have been encouraging companies to move overseas even before the trade war, according to analysts. Indeed, China has had "going out" policy encouraging such moves since 2001, but few companies felt an urgent the need to pursue it due to the huge market at home. 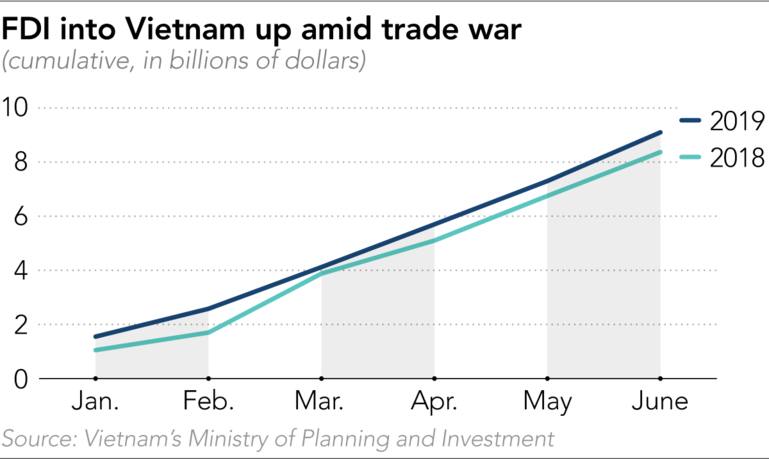 "What the U.S.-China trade war has done is to accelerate this trend in the short-term, potentially benefitting countries like Malaysia, Thailand and Vietnam," said Darren Tay, a risk analyst at Fitch Solutions.

Competitive wages are not the only thing attracting foreign investors to these countries. "A skilled, well-educated workforce, good infrastructure and a strong network of free trade agreements, including being part of the ASEAN Free Trade Area and EU-Vietnam FTA" are also factors, according to Rajiv Biswas, a Singapore-based economist at IHS Markit.

While most countries welcome foreign direct investment from China as they would from anyone else, they are also leery of being used to avoid Trump's punitive tariffs. The U.S. president recently threatened to impose a 10% tariff on the remaining $300 billion worth of imports from China starting Sept. 1.

"The authorities must set up measures to prevent Chinese products relabeled as Vietnamese bound for the U.S.," Vu Duc Giang, chairman of the Vietnam Textile and Apparel Association said in an interview.

In other countries, the production shift and accompanying investment are being embraced after a heavy focus on Belt and Road-linked infrastructure projects had sparked backlash.

Jiangsu Xinquan Automotive Trim announced in May it was investing 64.4 million ringgit ($15 million) in Malaysia. The investment will support its principle customer, Zhejiang Geely Holding, which produces vehicles in partnership with Malaysia's national automaker Proton Holdings for sale in the Southeast Asian market.

"Malaysia welcomes Chinese investment that comes with technology transfer, the use of local talents and certainly not massive migration of Chinese laborers," said an official with the trade office.

Malaysian Prime Minister Mahathir Mohamad has been deeply critical of Chinese investments approved by his predecessor. Mahathir told Chinese Premier Li Keqiang in Beijing last August that Malaysia would not allow a "new version of colonialism," referring to big-ticket infrastructure projects carried out in his country by Chinese companies.

The projects were part of China's Belt and Road Initiative, which has attracted criticism for leaving several developing countries deep in debt. Some of the companies involved in the projects in Malaysia had raised the ire of the 94-year- old Mahathir by importing equipment and laborers from China, rather than using local labor and resources.

The diversification of Chinese investment from a focus on resources and infrastructure toward manufacturing will be welcomed by many developing countries, said Biswas of IHS.

"Many developing countries are still dependent on commodities exports and their governments put a high policy priority on building up their manufacturing sectors to diversify their economies and create new jobs."