TAIPEI -- Google is preparing to release a smart speaker equipped with a display for this year's holiday season, sources have told the Nikkei Asian Review, escalating the competition with rivals like Amazon.com and Alibaba Group Holding in the market for voice-activated gadgets.

The new product, which is likely to be similar to the Amazon Echo Show, would round out the Google Home range of smart speakers running the artificially intelligent Google Assistant, akin to Amazon's Alexa.

"Google targets to ship some 3 million units for the first batch of the new model of smart speaker that comes with a screen," an industry source said. "It's an aggressive plan."

After introducing the Echo Show last summer, Amazon managed to ship only 315,000 units in 2017, according to research company Canalys.

Google earlier this year introduced its new Smart Display platform to partners such as Lenovo Group, JBL, LG Electronics and Sony, enabling them to build Echo Show-like devices. But the U.S. giant has yet to roll out such a product of its own.

Its AI speaker lineup currently features the standard Google Home, the cost-effective Home Mini and the high-end Home Max. The first two options are positioned against Amazon's regular Echo and Echo Dot, while the top-of-the-line model competes with Apple's HomePod, which comes with the Siri voice assistant. 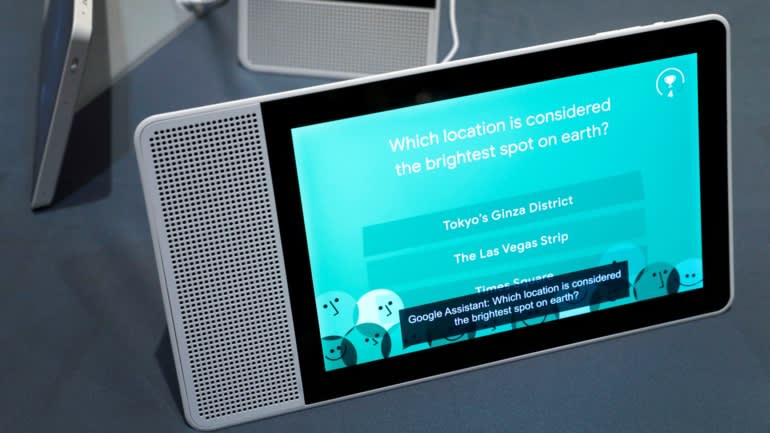 A Lenovo device with Google Assistant is shown in Las Vegas in January. Google has supplied its Smart Display platform to partner companies but has yet to produce such a product of its own.   © Reuters

Google's upcoming model with the display is still likely to rely on voice commands, but users should be able to play YouTube videos, check their calendars and view maps. Some industry executives predict more smart speakers will hit the market with displays, as image and video recognition features catch on.

For all of 2017, 35 million smart speakers were shipped worldwide, Canalys data shows. Amazon took the top market share, at 63%, while Google controlled 32% and other players fought over the scraps.

Google, however, accounted for 36% of around 9 million units shipped in the January-March period of 2018, with Amazon's share falling to 28%.

The competition has intensified with Alibaba, Xiaomi, Apple and others joining the fray. But at the same time, demand is booming: The number of installed smart speakers is expected to exceed 100 million in 2018, nearly 2.5 times more than the figure at the end of last year, according to a Canalys report.

Apple, for its part, initially planned to ship some 6 million HomePods this year, though it later cut the number to about 5 million amid user complaints that Siri is not as powerful as Google's and Amazon's assistants.

Smart speakers are only part of Google's hardware strategy. The Android software developer and top search engine provider showed its determination to beef up its hardware business last year when it took over a 2,000-employee-strong design team from embattled Taiwanese smartphone maker HTC.

Even so, Google sold only around 3.7 million of its Pixel smartphones in 2017, according to IDC. That is less than 2% of last year's iPhone shipments.

Google's hardware operations are closely tied to Taiwan's technology industry. Most of the Google Home lineup is produced by Quanta Computer, a key builder of Apple's MacBooks. A source suggested Quanta is also working with Google on a tablet to be unveiled this year. But as for the display-equipped speaker, the source said it will be made by Pegatron, an iPhone assembler and smaller rival to Hon Hai Precision Industry, better known as Foxconn.

Compal Electronics, an iPad supplier, is also engaging with Google to grab a share of the smart speaker production. Foxconn, meanwhile, is to help manufacture a new Pixel phone to be revealed in the coming months, with reports suggesting October as the likely timing.

Google has found that "it could be easier to learn users' behaviors, experiences and data in a more direct way if they could control the end-devices that go into people's homes," said Joey Yen, an analyst at research company IDC. "So that's one of the key reasons that [Google] wants to increase its own hardware presence."

As a latecomer to the smartphone business, Google focuses on flagship models rather than attempting to grab substantial market share, Yen noted. "But for its AI smart speaker business, the company is one of the front-runners, and it is much more ambitious to build an end-to-end ecosystem and platform with its own product lineup."

Google declined to comment on its new hardware products plan.