TOKYO -- Fees charged by headhunting agencies are surging in Japan as companies struggle to find top professional talent in a rapidly aging society.

At Professional Bank, an executive search consultancy based in Tokyo that targets technical experts in manufacturing and construction, fees have jumped by about a third over the past five years.

"Selecting and hiring talented workers are going to become even more difficult in the future, and fees will likely increase along the way," said Akira Kodama, president of Professional Bank, who employs a team of about 80 headhunters and typically charges a contingency fee equal to around 40% of the estimated annual income of the candidate.

"Although the fees have jumped, it's not rare to receive a second call from companies seeking our service again," added Kodama, who said the number of cases his company handles has increased by about 125% to 130% a year for the past three years.

With Japan's jobs-to-applicants ratio hitting a 44-year-high last September, Ministry of Internal Affairs and Communications data shows that there are 1.64 positions available for every applicant.

Add to that the declining population -- the figure fell by more than 430,000 last year, with the overall rate of decline reaching a new high of minus 0.21% -- and Japanese companies are scrambling to hire high-caliber workers. Some have had no choice but to relax employment conditions in order to secure the personnel they need.

Japan's "lifetime employment" culture is another hindrance. Although this postwar tradition has begun to fade, with younger generations preferring flexibility and mobility in their jobs, the mindset is still strongly embedded, especially among higher-level workers. For many people, the company they join straight out of university or high school is the one they stay with until retirement, with Japan's seniority based promotion system also encouraging workers to stay at the same company.

Baneful conditions for corporate recruiters have become a boon for headhunters.

"I would say contingent fees within the overall market have increased about 10% over the last couple of years," Akihiko Watanabe, president of Human Associates Holdings, the owner of executive recruitment company Aims International Japan.

Instead of charging clients a contingency fee, Aims International uses a retainer agreement system which sees the client pay an upfront fee when they sign the initial contract, followed by additional payments through different stages of the recruiting process.

"The retainer fee is around 7 million yen ($64,000) per case," said Watanabe. "We used to work based on a contingent fee but have shifted to a retainer fee in the last few years. We are handling bigger cases as well so the average fee has increased about 2 million yen."

The shortage of white-collar professionals has also created a niche market for outfits like human resource group Recruit Holdings, which operates Career Carver, a platform that matches headhunters with job seekers looking for change opportunities.

Career Carver so far has around 1,800 headhunters registered and more than 200,000 job-seeker members, people mostly in their 30s with experience in the IT, financial or manufacturing sectors earning an average of 8 million yen a year.

Aside from an initial registration fee, Recruit's main source of revenue is the 25% slice it takes from the headhunter's contingency fee. In the past, that charge was 15%.

"Job offers for high-level talent are surging and competitions between companies are getting fiercer," said Hiroki Yamada, manager of the market development group at Recruit Career, explaining the rise in fees. "Companies are not only buying people but essentially speed, too. Paying higher fees could give them a better chance at beating out competition and securing workers."

Since its launch five years ago, sales at Career Carver doubled last year, helping it achieve profitability for the first time. "If the contingent fee charged by headhunters continues to increase, it will also boost our sales," Yamada said.

Still, experts point out that headhunting has always been pricey in Japan compared with places like the U.S., Singapore and Europe.

According to Singaporean market research firm Disruptive Outcomes, "In many markets, 18% to 25% has become the default range" for the recruitment fee.

And while fees continue to rise, many Japanese companies are still struggling to keep employees on board. A survey by HR firm En-Japan revealed that nearly 40% of companies answered that retention rates for those who joined the company midway through their careers were low.

One in three respondents said employees are likely to resign after six months. 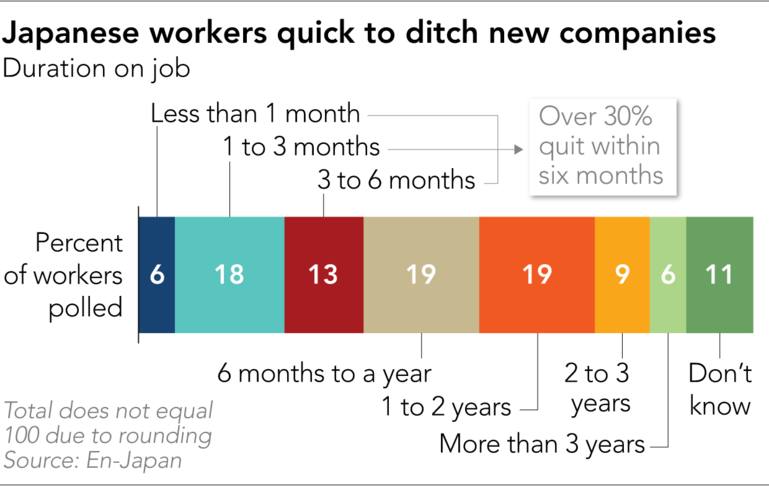 Kaoru Fujii, editor-in-chief of "Rikunabi NEXT," an online recruitment site, predicts that in the future individuals, not companies, will gain even more power.

"People are working longer years while companies are starting to have shorter lives," said Fujii. "Negotiating for high-talent workers will become more difficult so companies will have to tend to their employees even more."

That sentiment is reflected in the new type of headhunting agencies popping up, which focus more on the needs of the individual than the company doing the hiring.

An up-and-coming Japanese venture called for Startups Inc. is one example. The company not only finds executives for prominent startups but runs what it calls a "talent agency" business that aims to support future CEOs and company founders by offering advice on their careers.

The company, which is in the midst of organizing its initial public offering, uses a massive database housing information on domestic ventures to match individuals to companies.

"We differ from usual agencies in that our main goal is to offer complete support and produce the careers of entrepreneurs that are able to exit in the market," said Yuichiro Shimizu, CEO of for Startups.

Awarded "Headhunter of The Year" in 2014 and 2015 at Japan's annual headhunter summit, Shimizu sees huge potential in the business of supporting talented individuals. "We want to help expand and accelerate pre-IPO companies in growth markets like the internet of things, deep technology which includes robotics and AI, as well as VCs and incubators."