Hong Kong and Singapore fret over trade shows after coronavirus HONG KONG -- Richard Chan, a Hong Kong businessman who owns a factory in China that manufactures Christmas decorations, used to spend 2 million Hong Kong dollars ($258,000) on setting up booths to promote his products at an annual industry exhibition.

But long before Chan attended the exhibition in January when the coronavirus pandemic first began to emerge, he had slashed his budget by 75% over the past 10 years because the event's effectiveness in acquiring new clients had diminished significantly.

"The exhibitions 10 years ago were very powerful. Many new clients were acquired through the fairs, but now we were just there to tell people that we still exist," Chan said. He also lamented over the declining traffic at other trade shows in Asia.

After running his factory in the eastern Chinese city of Dongguan for two decades, Chan decided to turn to the internet for help. He plans to apply for a government fund that is dedicated to helping companies grow businesses through online platforms. "I don't know how effective it will be, but I'll try," he said.

Like Chan, many business owners are seeking alternatives to market their products at a time when some were already having second thoughts about the value of traditional trade shows. Further complicating the industry, exhibitions are now proving difficult to organize due to worldwide travel restrictions and social distancing measures aimed at curbing the spread of the new coronavirus. 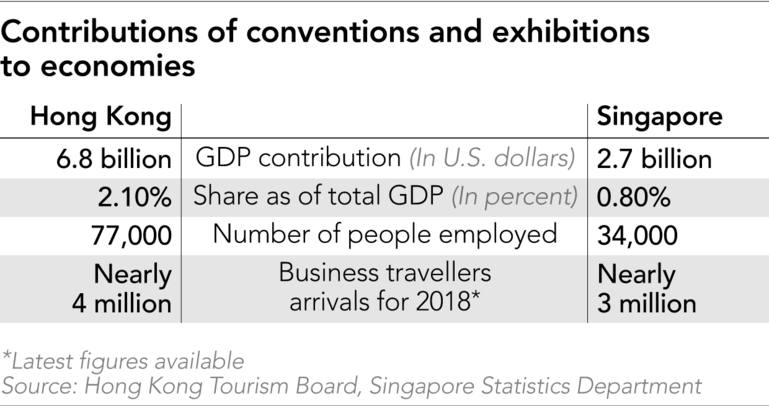 In one notable example, a business conference held at the Grand Hyatt Singapore hotel in late January led to at least four cases in the city-state, and helped spread the coronavirus to other Asian countries and beyond.

As the virus outbreak widens, nearly all business events in the Asia-Pacific region have been suspended, leaving many companies in the industry of meetings, incentives, conventions and exhibitions, or MICE, on the verge of collapse.

According to estimates by the Hong Kong Event Planning, Exhibition and Stage Federation, the industry shutdown will lead to at least HK$20 billion in losses to the MICE industry, given that more than half of the companies have had no income since the beginning of this year.

The federation said that most of the companies do not have enough cash to survive through the second half of the year as the social unrest in Hong Kong had already taken a toll on their businesses last year.

"We've been in grave difficulties for almost a year already," said Anita Tang, who runs an exhibition booth design company in Hong Kong. "We are burning cash every day, but the pandemic has no end in sight."

She added that many experienced workers in the industry have sought job opportunities in other fields, "so even if businesses rebound later, we would all be struggling to find talent."

For Ricky Li, who owns a stage production house that relies on listed companies' earnings conferences for business, the greatest concern is that his clients might never return.

"Some smaller companies find it much easier to conduct online conference calls, so what's the point of splurging on meetings in five-star hotels?" Li said, adding that while established companies may value real-life interactions more, they are likely to lower their budgets due to the current economic recession. An electronics show in Hong Kong. The chairman of the Hong Kong Exhibition & Convention Industry Association said exhibitors have a "very strong appetite" to get back to business once travel restrictions are relaxed.   © Reuters

The coronavirus pandemic is set to extend the losses this year with important events, including the HSBC Singapore Rugby Sevens and Shangri-La Dialogue defense summit, having been called off.

"What we are seeing with the cancellations and postponements are organizers looking at the second half of the year to stage their events in Singapore," said Aloysius Arlando, president of the Singapore Association of Convention & Exhibition Organizers and Suppliers.

Similarly, early 2020 events in Hong Kong have been rescheduled to July and August in the hope that the outbreak can be contained by then. Even if that is not the case, exhibition venues are optimistic that businesses will return eventually.

"[The] vast majority of exhibitions are recurrent and well-established in the business calendar of the respective industries," a spokesperson at the Hong Kong Convention and Exhibition Centre said. "Despite the recent challenges, these events are staying with Hong Kong and the HKCEC."

The Hong Kong government has also rolled out aggressive subsidies to event organizers that cover full venue rental costs at the HKCEC for 12 months to lure back businesses.

Meanwhile, exhibitors have a "very strong appetite" to get back to business once travel restrictions are relaxed, according to Stuart Bailey, chairman of the Hong Kong Exhibition & Convention Industry Association.

Bailey noted, however, that corporate sustainability targets will also make executives pickier in terms of business travel in the long term. While trade fairs that feature the latest technology and equipment are irreplaceable, he said, conferences and talks can go virtual. The Singapore Expo Convention Hall and Exhibition Centre is being converted into a facility for patients recovering from COVID-19.   © Reuters

Still, some events are more about the experience than the sales. Art Basel, the world's largest art fair, opened an online exhibition in late March to make up for the cancellation of its Hong Kong show.

Although the online showcase attracted more than 250,000 visitors and received positive feedback from galleries in terms of sales and the ability to generate business leads, the organizer believes that digital platforms cannot replace the experience of viewing art in person.

"Collectors don't come to fairs exclusively to buy work, just as gallerists don't only participate to sell the works on display," an Art Basel spokesperson said. "Face-to-face interaction will always remain intrinsic to a market built on trust."

The same applies to the sales of services. Hangzhou-based wedding planner Zhu Yun makes sure that every year she attends at least three wedding exhibitions in China, through which she has secured about 20% of her clients.

"Wedding planning is not a standardized service. Offline communication is vital," Zhu said. She said showcases are crucial to entice couples into purchasing such services, which is not easy to achieve behind computer monitors and smartphone screens.

Instead of participating in online wedding exhibitions, Zhu is strengthening her company's marketing efforts through mobile apps and social media for now.

Additional reporting by Nikki Sun in Hong Kong and Dylan Loh in Singapore.