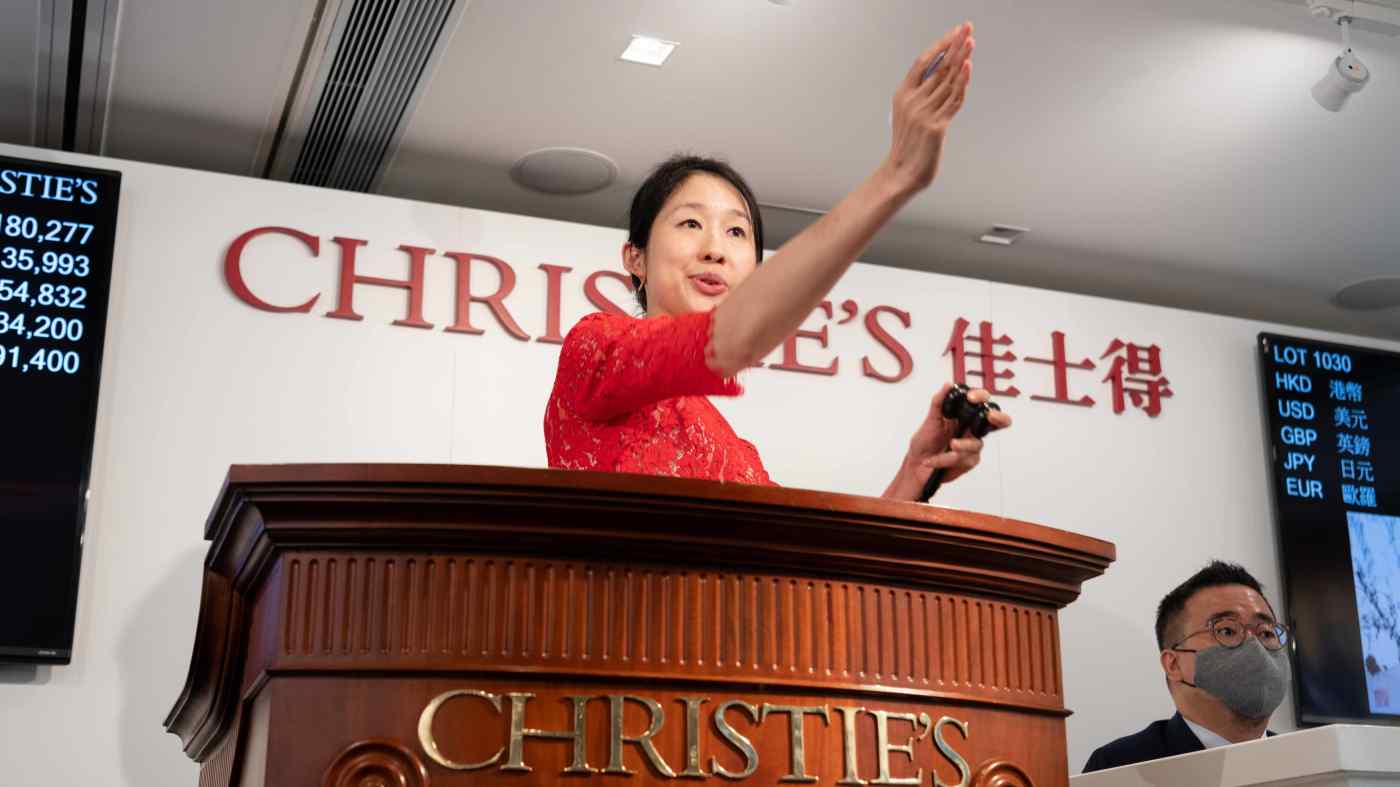 HONG KONG -- Gavels are falling once again in Hong Kong art rooms this week as auctions resume live public sales for the first time in months, in a further sign of recovery from the coronavirus pandemic.

Still, the major auction houses are proceeding with caution. Sales are following social-distancing guidelines, with seats set further apart than usual. Visitors to the auction rooms will face temperature checks, as at nearly every public venue in the city.

And while collectors will get to view artworks in person, they will not enjoy the usual perks of high-profile social and networking events: Champagne and savory canapes will be absent in order to discourage large groups from mingling.

"We are anticipating and hoping that we return to a normal auction format for good, but very mindful that guidelines by the government are in a constant stage of review," Edward Wilkinson, executive director of Bonhams Asia, told the Nikkei Asian Review.

Clients are "happy with what they are seeing online and enjoying that, but they also like to see works in person," he said. 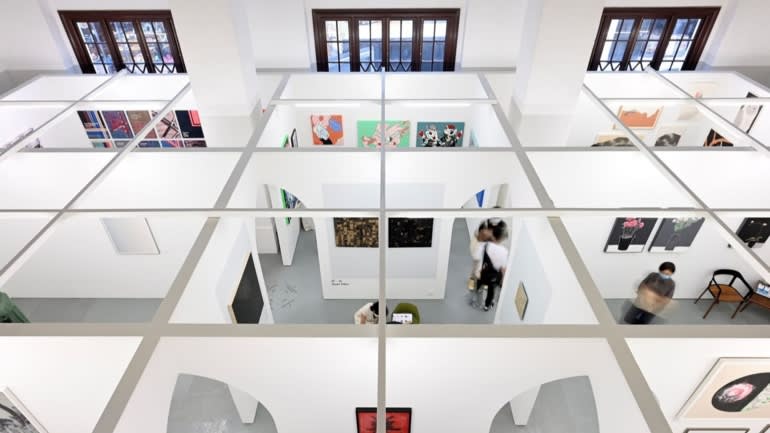 Like virtually every sector of business and society, the global art market -- centered around Hong Kong, London and New York -- has been upended this year as a result of the outbreak, with auctions postponed, canceled or shifting to digital formats as countries went into lockdown and travel restrictions were imposed.

Hong Kong's traditional "arts month" in March, with major openings, exhibitions and the start of the auction season, was brought to a virtual halt. The season's biggest event, Art Basel Hong Kong, canceled its show that month and moved exhibits online.

That move had a "big impact" on the market, said Willem Molesworth, a Hong Kong Art Gallery Association board member and director of the de Sarthe Gallery. Art Basel Hong Kong "brings in an international clientele from all over the world."

In recent weeks, however, the Hong Kong art market has bounced back.

In June, the Art Gallery Association brought together several of its more than 40 members for an exhibition of works by Asian artists that drew wide attention. And now, the international auction houses with offices in Hong Kong are reporting a robust week, in spite of the pandemic and global economic uncertainty.

With attendance levels this week much lower than usual because of global travel restrictions, Jonathan Crockett, chairman of Asia at Phillips, said his company's art specialists have been able to deepen their relationships with buyers and sellers in Hong Kong.

"If anything, these circumstances have somewhat, ironically, brought us closer to people as opposed to making us feel more distant," he said. 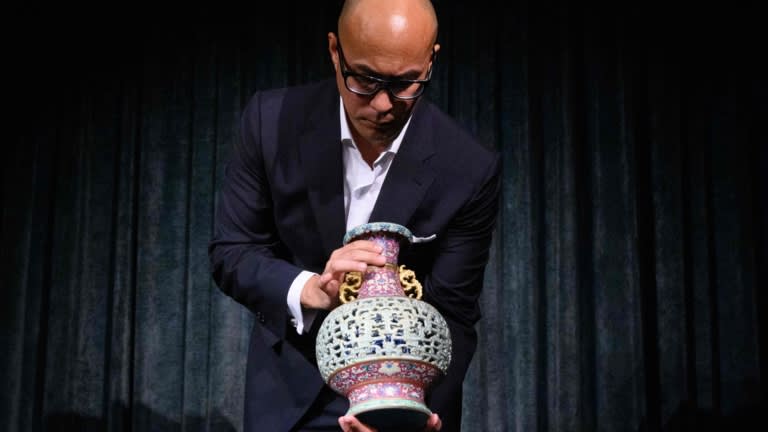 Nicolas Chow, chairman of Sotheby's Asia, displays a Chinese porcelain vase from the early Qing dynasty, with an estimated value of up to $11.6 million. It will go on auction on Saturday.   © AFP/Jiji

The return of auctions and other art events also is a sign that the market is returning to some semblance of normalcy, at a time when concern over the pandemic and Hong Kong's new national security law have created much uncertainty in the city -- although the timetable for rebooting auctions predates the legislation.

Hong Kong is ahead of New York and London in resuming its sales period. Sotheby's kicked off with a seven-day event starting on July 5, with Christie's, Bonhams and Phillips following during the week.

In a test of the market, Sotheby's last month held a silent auction that combined the advantages of both a live auction and a private sale, said Nicolas Chow, chairman of Sotheby's Asia. Works were marketed worldwide and collectors were invited to submit written bids ahead of the sale, but the results were kept confidential.

"This is a sale that we put together when the situation globally was a lot worse than it is today, and so we wanted to protect our sellers from potentially not selling an object," Chow said.

With the silent auction, there is a potential upside compared with just a fixed price from a private sale. Confidentiality was a way for Sotheby's to gauge the market in case there were not any takers, he said. "But what we saw was confirmed from that sale -- that there is quite a lot of demand at the top end."

Wendy Goldsmith of London-based Goldsmith Art Advisory said she is watching for certain signs this week to determine the market's health.

While volume will not be the same compared with other seasons because there are fewer auctions and no live art fairs, "success will be judged by comparable prices for individual pieces and artists at [pre-coronavirus] levels, as well as the sold percentages of the auctions of at least 80%," Goldsmith said. Any sign that collectors are skittish over the global economic downturn brought on by the pandemic is not apparent. "Last week, we saw close to 100% sale totals by volume at some of the various owner contemporary auctions, which is extraordinary at the best of times," she said.

"I am in awe of how the art market is holding its own," unlike the downturn during the global financial crisis in 2008-2009, Goldsmith said. During that period, "it took about 18 months for the market to bounce back," she said. "If you currently have disposable income, at almost any level, now is the time to be collecting."

Wilkinson said Bonhams is "seeing that collectors who are passionate and focused are not against paying" similar prices or even prices at higher levels compared with previous auctions.

"The market is flush with money," said Francis Belin, president of Christie's Asia Pacific, adding that some collectors are looking to acquire artworks from blue-chip artists as investments beyond equities and bonds.

"That is the thinking of some of our collectors," he said, adding that Christie's keeps its focus on the artworks. "We bring as much information as possible" to the collectors, "but we are not advisers on how to spend their cash." The absence of live auctions has also hastened the shift to digital sales, a format that the auction houses say their clients are adapting to quickly. While online previewing and bidding has been around for years, the timeline for introducing new technology has been speeded up.

Goldsmith, the art adviser, said that "like so many businesses, what has completely changed the landscape of the art world is the internet."

The market is seeing many "new clients who have money and don't feel intimidated by starting to collect on the internet, which -- with no art fairs or live auctions up to now -- is where all the sales activity has had to turn," she said. "People still need their fix of art."

In addition to the live-streaming of auctions, sales previews are shown on digital formats with interactive catalogues, images of objects are available in various lighting situations, and video discussions with specialists offer additional details.

Sotheby's app includes an augmented-reality function that allows its clients to visualize how paintings would look in their home. "Choose your wall, select the spot, and you can project the piece to scale on your wall," Chow said.

Still, auction houses are welcoming the return of live auctions.

Belin of Christie's said that while improved and extended digital formats have created a lot of convenience for collectors, he believes that it is necessary to physically "be with the art" in the same room. "You cannot replace the experience of a museum with a virtual tour."