HONG KONG -- China's new national security law for Hong Kong adds another level of uncertainty for businesses operating in the city, and some are cautious as they digest the legislation and monitor its implementation in the days to come.

Is lending money to an activist illegal? How should a company handle sensitive data? Enterprises here are asking themselves such questions.

"The law is a lot more severe than what we had expected," said a senior risk manager at a European bank, who requested that his name not be used.

"The power vested on security agencies to apprehend both Hong Kong locals and foreigners and send them to the mainland for trial is causing consternation within," the risk manager said.

His bank is now seeking a way to walk the fine line of serving clients without drawing the ire of Beijing. In the coming weeks, the bank will implement a preliminary standard operating procedure for its employees.

However, "clauses such as data security could be interpreted in many ways," he said, and it will be up to the discretion of the authorities to decide whether certain corporate actions violate the law or not. The risk manager also expected increased compliance spending amid the threat of U.S. sanctions. 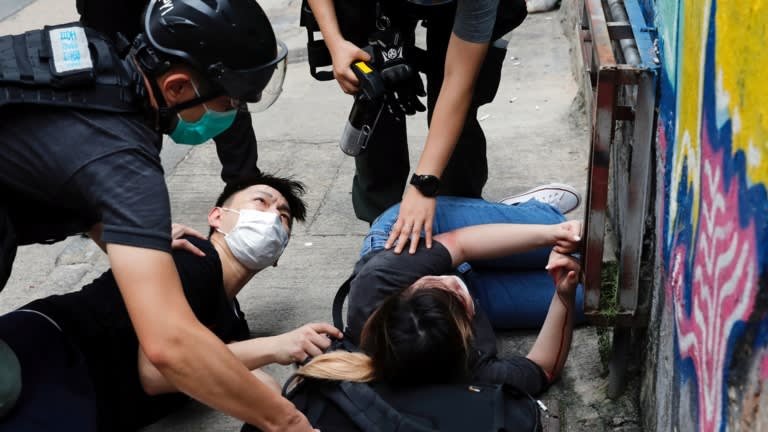 Protesters are detained by riot police in Hong Kong during a march against the new national security law on July 1, the anniversary of the territory's handover to China from the U.K.   © Reuters

The legislation, whose articles and provisions were only revealed after it was signed by Chinese President Xi Jinping on Tuesday and became effective that day, provides for criminal penalties for separatism, subversion, terrorism, and collusion in support of foreign interference. Some violations of the law could lead to life imprisonment, while some offenders could also be extradited and tried in courts in mainland China, which lacks an independent judicial system.

A source of uncertainty for many, including the business community, is the vague nature of the provisions. The four criminal acts have room for interpretation, and companies could inadvertently cross the red line without knowing it.

At the same time, the law clearly stipulates that companies are liable for punishment. Article 31 of the law states that "a company or an organization shall be suspended or its license or business permit shall be revoked if the body has been punished for committing an offense under this law."

Article 38, meanwhile, says the law applies to offenses committed from outside Hong Kong "by a person who is not a permanent resident of the region." People, including those in the business community, could be detained at the airport over what is deemed to be a violation of the law.

He said the national security law has fundamental conflicts with the common law system and the Basic Law, Hong Kong's mini-constitution, and that the city's position as a global financial hub could be at risk because it relies heavily on those premises. Hong Kong, he worries, could be "increasingly seen as a place no different from China, since the legal and judicial protection is being removed."

Already, U.S. Secretary of State Mike Pompeo on Monday announced a halt to exports of defense equipment to Hong Kong and plans to impose the same restrictions as those already placed on exports to mainland China of technologies with military applications. "Celebrate the implementation of the national security law," reads a sign in Hong Kong's Victoria Harbor on July 2. (Photo by Takeshi Kihara)

Violations of U.S. sanctions could be very costly and also come with the price of reputational damage. Banks including BNP Paribas and HSBC Holdings have paid billions in fines for violating U.S. sanctions on other issues.

"Sanctions rather than export controls will be much more detrimental for Hong Kong, and the economic impact will be large," said Alicia Garcia-Herrero, chief Asia-Pacific economist at Natixis. "For financial service providers in Hong Kong, their main customer base will turn increasingly China-centric and away from a regional bias."

The risk manager's bank has over the years set up multiple bases in Asia. Although Hong Kong remains the biggest center given the size of its local business and its planned expansion on the mainland, its Singapore operations serve as the de facto headquarters for South and Southeast Asia, while its Tokyo hub has steadily picked up some North Asian business.

The American Chamber of Commerce in Hong Kong said in a statement on Thursday that it would "remain committed to Hong Kong as a home base for international business" but added that it "will take time for the business community to digest details of the law." The chamber representing U.S. business interests in the territory will "seek further clarity on how the law will be interpreted and implemented."

The law "may result in protests, and violence, over the coming days, and will likely alter the climate in the longer term," Steve Vickers, CEO of Steve Vickers & Associates, warned in a report on Tuesday before details of the legislation were released.

The Hong Kong-based political and corporate risk consultant said that the local business community "should thus prepare for near-term disruption and some street protests." Indeed, 370 people were arrested on Wednesday for illegal assembly, furious driving and breaching the security law.

On top of a possible increase in social disorder, Vickers noted that companies "may now face demands for displays of loyalty from one or the other side -- and choosing sides will impose costs."

For example, HSBC publicly declared support for the new legislation last month, even before the details were revealed, and has faced criticism from the U.S. and the U.K. over its decision. Hong Kong Chief Executive Carrie Lam speaks during a ceremony to mark the 23rd anniversary of the territory's handover to China from the U.K., in Hong Kong on July 1.   © Reuters

The legislation's enactment also underscores Beijing's heightened influence on the territory. The law will "accelerate Hong Kong's absorption into the Greater Bay Area and strengthen the dominance of mainland businesses," Vickers said, referring to Hong Kong and Macao, and nine cities in Guangdong Province, including Guangzhou and Shenzhen.

A fund manager based in Hong Kong said his clients were concerned about the impact of the law on their investments and have inquired about offsetting the risk by putting together derivatives transactions that protect them. "Investors clearly expect Hong Kong's short-term risk premium to rise," he said.

Speaking at an online forum on Thursday, Wong said many retailers in the city "are not going to commit another two years of rent, no matter how low the cost will be," given another uncertain factor, on top of already-escalating China-U.S. tensions and concerns over the expected next wave of the coronavirus.

However, Wong's e-commerce business is riding an upward trend. More consumers are going online for daily necessities shopping, accelerated by social distancing and a push to stay home in the pandemic.

"No matter you're happy or unhappy, you have to eat," he said, and vowed to "definitely continue to invest" in warehouses, trucks and other items to enhance his company's platform. After losing a total of 1.697 billion Hong Kong dollars ($218.95 million) since he was forced to give up his TV broadcasting business and turn to e-commerce in 2015, the company is expected to report its first net profit -- of more than HK$90 million -- for the first half of this year.

Like Wong, some say the fears of widespread repercussions could be overstated.

"What matters most importantly is stability, the notion that the year forward might have less social unrest than the year passed. That's really the key," said Eric Moffett, portfolio manager at T. Rowe Price in Hong Kong. "Financial markets are driven by the economy, and all indications are the year ahead will be much brighter."

Yang Yan, fund manager and head of research for greater China at Atlantis Investment Management, echoed that the new law "will help Hong Kong gradually restore law and order, and pave the way for Hong Kong's market stability -- investor concerns could dissipate as time goes on."

"One thing to bear in mind here is the law that we see in Hong Kong is laws that we see in mainland China in terms of security," Lee Quane, regional director for Asia at human resources consultancy ECA International, told reporters on Thursday at a biannual briefing on the cost of living for expatriates around the globe.

Stressing the difficulty in estimating the impact on companies bringing personnel into Hong Kong, as the law had only been in effect for two days, Quane noted that "China remains the most common destination globally for companies sending staff to ... in spite of China's political system."

He said that "just because of what's happening in Hong Kong doesn't necessarily indicate to me that companies are less likely to send staff here."

Richard Harris, a former director at Citi Private Bank and founder of Port Shelter Investment Management in Hong Kong, said that "the city will continue to be a gateway to China."

The impact of the law "will be felt on the margins with businesses and financial institutions opting to expand in, say, Singapore instead of Hong Kong," he said, but "the loss of the special status and the likelihood of businesses facing pressure from China would mean Hong Kong loses some of its energy and growth."