Terminal operators are keen for the Port of Hong Kong to catch up with its mainland rivals. (Photo by Rie Ishii)
EDUARDO BAPTISTA, Contributing writerJanuary 8, 2020 13:57 JST | Hong Kong, Macao
CopyCopied

HONG KONG -- Less than two decades ago, Hong Kong's container port stood as testament to the city's role as a gateway between China and the rest of the world. As recently as 2004, it was the world's busiest port. Now, the strains are evident.

"It's a very difficult job," said Peter Levesque, CEO of Modern Terminals, one of five companies that manage container terminals in the city's port. "You're hunched over, you're going back and forth in a cab, it's rattling all day. It's not an easy job."

The port's boom days are long gone. In the past 15 years, the Port of Hong Kong has slipped in the rankings as other ports in the region have expanded, offering lower rates and faster service. That is a worrying development for one of the pillars of Hong Kong's economy: The port contributes 3.2% to the city's gross domestic product and provides 180,000 jobs, accounting for 4.7% of total employment in the city.

Meanwhile, mainland China's largest ports are actively cutting their workforce as they roll out automated cranes that move containers faster and with greater accuracy. Everything is synchronized. A fleet of autonomous vehicles feeds a constant supply of containers to 30-meter-high cranes. The machines work like clockwork, throughout the night if necessary.

The world's largest automated container terminal is the Yangshan Deep-Water Port, part of the Port of Shanghai. In 2018, it was the world's busiest container port, handling 42 million twenty-foot equivalent units, or TEUs, the industry standard.

Hong Kong's throughput, or cargo handled, stood at 19.6 million TEUs last year, 1.2 million less than the previous year. In 2004, Hong Kong's last year as the world's busiest container port, its throughput was 22 million TEUs. Since then, it has lost cargo to other regional ports. That decline is likely to continue as the port enters its 24th month of declining traffic. In May 2017, the northeast Chinese city of Qingdao automated an entire terminal, the first to do so in Asia. Since then it has consistently broken records for cargo handling, the latest in January when average crane efficiency reached 43.23 containers handled per hour, surpassing its own record of 42.9 containers per hour. By comparison, Modern Terminal's personal best was 41 containers per hour.

So far, the only automated operations in the Port of Hong Kong are handled by Hong Kong International Terminals, or HIT, owned by Hutchinson Port Holdings, a unit of conglomerate CK Hutchison Holdings. Its Terminal 9 combines 29 remote-controlled gantry cranes with an automated container stacking system.

"It was a miracle that [Hutchinson] was able to do all the testing and implementation without halting operations," said Benjamin Wong, who heads the transport and industrial wing of InvestHK, a government body in charge of attracting foreign investment.

However, such technological makeovers do not come cheap. HIT's automation is part of a 2-billion Hong Kong dollar ($256 million) fund to upgrade the terminal's technology. Levesque says that convincing shareholders to make such investments is not easy. Indeed, studies show that automation is not a surefire productivity booster. 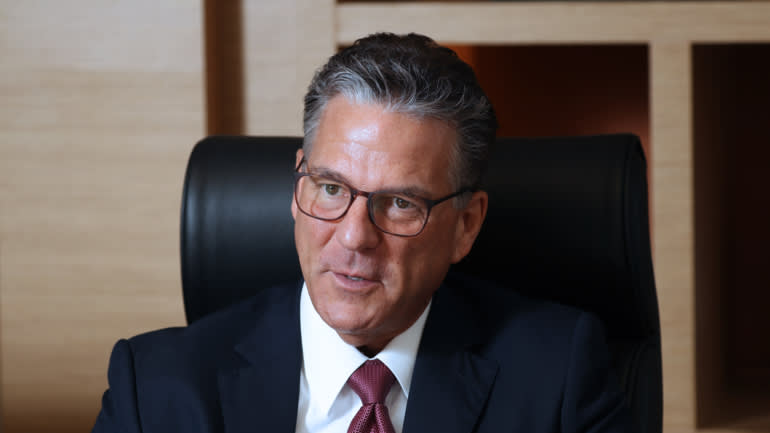 According to a recent study by McKinsey, automation in ports takes much longer to yield profit than in warehouses, mines and chemical plants. That could be attributed to deep-seated problems that frequently affect a port's infrastructure: siloed operations, insufficient pools of data and shortages of competent automation engineers. The study said that rolling out automation under such conditions could even lead to declines in productivity.

Still, terminal operators like Modern Terminals are eager for the port to catch up with competitors in mainland China. Humans are still very much a part of the port's on-the-ground operations, as are delays in the movement of cargo: There is a constant stream of trucks entering Modern Terminals.

"It's much easier to take an automation strategy and then go ahead and put it across the entire plant here in Kwai Tsing, without having to worry about what the other guy is doing," he said.

A number of physical barriers to automation have been cleared. For example, paperwork previously was required every time a container was moved between a company's respective terminals, creating a wasteful and fragmented service that put off carriers. The Seaport Alliance resolved that issue through an app that allows truckers to use a QR code when accessing a terminal. Such initiatives have allowed the alliance to halve the costs of inter-terminal trucking. A driver scans his smartphone at the entrance to Modern Terminals. (Photo by Rie Ishii)

More important, a digital infrastructure is now being built over the port's physical infrastructure. The sheer volume of cargo being handled in busy ports like Hong Kong demands accurate predictions of cargo arrival times, as well as nimble solutions to unexpected disruptions.

Real-time information on ship routes and schedules is crucial. If a port is able to predict the arrival time of a cargo shipment with increasing accuracy, it can make better use of available space in a container terminal.

That is particularly poignant for the Port of Hong Kong given its current role as an international transshipment hub. Over the past three decades, the swift development of ports in southern China means that carriers increasingly opt to skip Hong Kong when sending goods to and from the mainland.

Nowadays, the Port of Hong Kong is mostly used as a stopover, creating a high traffic of vessels docking and setting sail at the same time. The never-ending pressure to reduce waiting times for vessels and determine the smartest position of cargo with different destinations could be taken on by artificial intelligence-powered systems of container handling.

Data-sharing is the foundation of AI, and the Port of Hong Kong is already laying the groundwork. At a May event at the American Chamber of Commerce in Hong Kong, HIT Managing Director Gary Yim said that the members of the Seaport Alliance were in the process of aligning their IT systems. At the same event, Levesque announced the alliance's goal for 2020: reclaim 2 million TEUs from regional competitors. The training center at Modern Terminals in Hong Kong: Finding new port workers to replace those who retire is a challenge. (Photo by Rie Ishii)

To be sure, the city's hopes for a "smart port" are dependent on more than just consensus among stakeholders.

Levesque says that Modern Terminals experienced difficulties implementing a new terminal operating system in 2014 due to its "complexity," taking several months before operations were "stabilized."

Wong from InvestHK says that the rapid automation of mainland Chinese ports would not be possible without an abundance of empty land. "In mainland China, they can build it from ground zero," he said. "They can cram all the new technology into that single point."

Admitting the port has been relatively "slow" in adopting technology, Levesque believes the shortage of land actually makes a technological overhaul even more necessary. Despite the short-term hit in profits because of upgrades, Levesque says they are indispensable to Hong Kong's long-term prospects in the "hypercompetitive" battle for cargo.

"The long-term cost of not buying and implementing technology is now much worse than taking the hit."