Hong Kong's small businesses anxious over 'Made in China' policy HONG KONG -- Inside a factory in Hong Kong's bustling Lai Chi Kok district, dozens of workers place multiple layers of nonwoven fabric into machines, where they are compressed, cut into rectangles and attached to earloops. From there, the face masks undergo quality control before they are sterilized, bundled and boxed for shipment.

These "Made in Hong Kong" masks are manufactured by Lockill, established in March amid the coronavirus pandemic, and are sold locally and abroad. But the company's U.S. exports are facing an uncertain future after Washington announced this past summer that all Hong Kong imports must be labeled as "Made in China" in response to Beijing's imposition of a national security law in the city.

The policy, which only affects products exported to the U.S., comes into effect on Tuesday.

The U.S. market makes up 15% of Lockill's business since it started exporting there in April. Now the company is engulfed in tensions between Washington and Beijing over trade and other issues. The lengthy time for shipping the masks by sea means that Poon had to suspend exports to the U.S. in August.

"We lost the U.S. market," said Jason Poon, director of Lockill, adding that the new U.S. policy also hurt his business in other ways because many Western countries do not have confidence in medical supplies produced in mainland China. Jason Poon, director of Lockill, a Hong Kong-based manufacturer of face masks, says the "Made in Hong Kong" label is important for the medical-supplies industry. (Photo by Stella Wong)

"When the measure was announced, U.S. importers contacted us and said they found the Made in China wording unacceptable," he said.

The Lockill mask factory is not alone -- a number of small local manufacturers also see their businesses in danger because they can no longer export their products as Made in Hong Kong.

Hong Kong was a once-flourishing manufacturing hub, one of the Four Asian Tigers -- along with South Korea, Taiwan and Singapore -- thanks to the booming textile and light manufacturing industries. But the city's rising rents and labor costs prompted many factories to move north to China in the 1980s. While Hong Kong's manufacturing industry may not be as vibrant as it was a few decades ago, Poon believes that Made in Hong Kong products will have a crucial role in the city's economic transformation.

Secretary for Commerce and Economic Development Edward Yau said that while the impact of Washington's new policy on Hong Kong's economy would not be huge, it would hit certain sectors and companies relying on that market.

Yau said last month that Hong Kong launched proceedings with the World Trade Organization to challenge the new labeling regulation. That was the first time since the 1997 handover that Hong Kong has initiated direct action against another WTO member. Yau said that if the dispute cannot be resolved through consultations within 60 days, Hong Kong could request that the WTO establish a panel for an investigation and ruling. He said that locally made exports to the U.S. would be affected immediately, but that the Hong Kong government "would not advise" manufacturers to label their products in a way that would violate WTO rules. "Exporters need to think of a way by themselves so that their exported products can fit different requirements," Yau said.

Poon said that Yau's comments do not reflect the current situation in Hong Kong, because there now are more exports of locally made medical supplies to the U.S. than last year.

"The Made in Hong Kong label is very, very important for masks," he said. "Western countries have the impression that products made in China are problematic. They will avoid using them."

Spain, Turkey and the Netherlands in March found thousands of testing kits and medical masks from China were substandard even though they had quality certificates. That prompted a number of European governments to reject Chinese-made medical goods.

Poon said the Made in Hong Kong label is important for the medical-supplies industry. "In their eyes, Hong Kong is a developed city -- the quality of the masks produced in a developed region is more trustworthy."

If more countries fall in line with the U.S. measures to force a Made in China label on Hong Kong products, it would be a crisis that "ends the majority of local industries," he said.

Apart from the emerging medical-supply industry, a near-century-old family food business also finds itself embroiled in the U.S.-China dispute because of the new label policy. 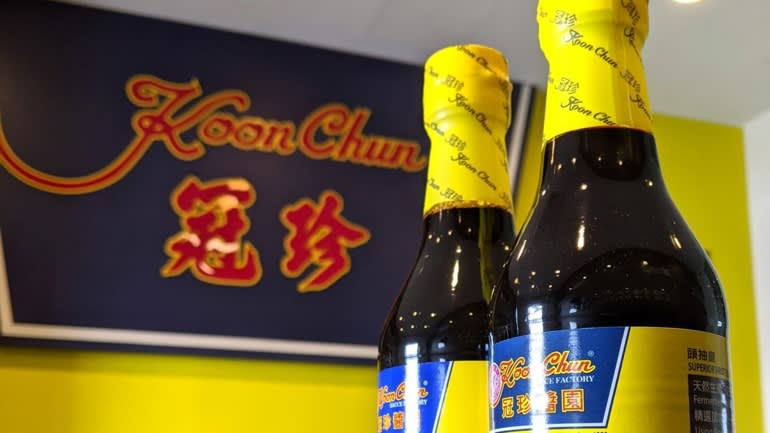 The Koon Chun Sauce Factory, founded in 1928, is one of the most enduring businesses in the financial hub. Led by fourth-generation owner Daniel Chan, the company manufactures soy sauce and other condiments in a 300,000-square-foot building in the outlying Yuen Long district. For 92 years, the company has used the Made in Hong Kong label.

Chan said up to 90% of the company's products are shipped overseas. The U.S., in particular, is a major export market -- up to half of all overseas exports are shipped to the country.

Following the decision by Washington, his company held back shipments to the U.S. and ordered workers to relabel tens of thousands of bottles as Made in China. He described the new U.S. policy as "unfortunate" because Made in Hong Kong bears the city's cultural identity and has been widely accepted by the international community.

Chan also is concerned that the Made in China label could be linked with the mainland's history of food-safety scandals, and could worry U.S. consumers amid heightened anti-China sentiment. "In the past 10 years, we have heard about fake milk powder, fake eggs and fake soy sauce from China," he said. "It is very hard to tell at this point what will happen."

And he is even more worried about potential U.S. tariffs on goods from Hong Kong. "If the tariffs really come, that would be devastating."

Chan said the factory may open a second location outside of Hong Kong -- such as Taiwan, Canada or Southeast Asia -- to mitigate future political risk if the situation deteriorates. "We all hope [the tariff] is not coming," he said, but added that "no one can control international politics." A quality control worker at Lockill's factory. Owner Jason Poon says Hong Kong-made products can be sold at a premium price because of they are "trustworthy." (Photo by Stella Wong)

Benny Do Yuen-ling, director of jewelry exporter WCJ International, said that the policy could affect the image of Hong Kong-made jewelry exports.

"Made in China [jewelry] products are usually mass produced and are less expensive," he said. "Made in Hong Kong products are more unique, with better quality in design and raw materials."

Do, who serves as chairman of the Hong Kong Jewelry Manufacturers' Association, said that local manufacturers are more experienced and their product design is closer to international fashion trends.

His company has not been greatly affected because the U.S. market comprises only around 10% of its business, but he will consider reducing exports to, or even withdrawing from, the U.S. market if Washington-Beijing relations worsen.

"If the rivalry between the U.S. and China continues, then it will have a great impact on the Hong Kong jewelry manufacturing industry," Do said. "There may be less orders from the U.S. and tariffs could rise. That would make it increasingly challenging for us to export to the U.S."

"Since last year, many companies in our industry have adjusted their market strategies in order to reduce reliance on the U.S. market," he said.

Poon of mask manufacturer Lockill said Hong Kong can take reference from Switzerland -- while the European country does not have a large volume of exports, its watches and handmade products are renowned around the world for their premium quality.

"Hong Kong should not solely rely on property speculation," he said. "In fact, Hong Kong has potential in manufacturing products like surgical masks." Similarly, he believes that Hong Kong products can be sold at a premium price internationally, especially in Southeast Asia.

"As Hong Kong currently reports a dimming economic outlook and a high unemployment rate, our government should be more proactive in protecting the local manufacturing industry," Poon said.