How emoji became a multimillion-dollar business

From emoticons to Line Friends, they offer a creative and emotional vocabulary Emoji were ubiquitous in Japan by the early 2000s, but it was not until Apple added an emoji keyboard to its worldwide iPhone operating system in 2011 that they emigrated to global stardom. (Nikkei montage)
FRAN KUZUI, Contributing writerNovember 27, 2019 13:01 JST | Japan
CopyCopied

All these symbols signify "confused," and they have become part of a universal language. The first is a basic emoticon using punctuation marks and letters; the second a more complex kaomoji (Japanese for "face character"), using symbols from global alphabets; and the last an emoji, a miniature picture. More recently, they have been joined by animated "stickers" featuring distinct characters that can be pasted into text.

With emoticons originating in the West in the 1970s and 1980s and emoji in Japan in the 1990s, these symbols have capitalized on the smartphone boom and helped to change the way people communicate with each other in the 21st century, giving rise to a vibrant form of interaction. Today they are also a multimillion-dollar phenomenon in Asia.

"Emoji and stickers are a form of social glue, especially in Asia. They present an opportunity for bonding," says Alisa Freedman, assistant professor of Japanese literature and film at the University of Oregon.

Forms of communication in Japan have traditionally been complex and subtle, involving politeness and nonverbal cues. For the Japanese, avoiding miscommunication proved tricky without social context, which would dictate proper forms of address. Letters usually include an honorific salutation, a seasonal greeting and possibly a "by the way" as a segue to the true point of the message. 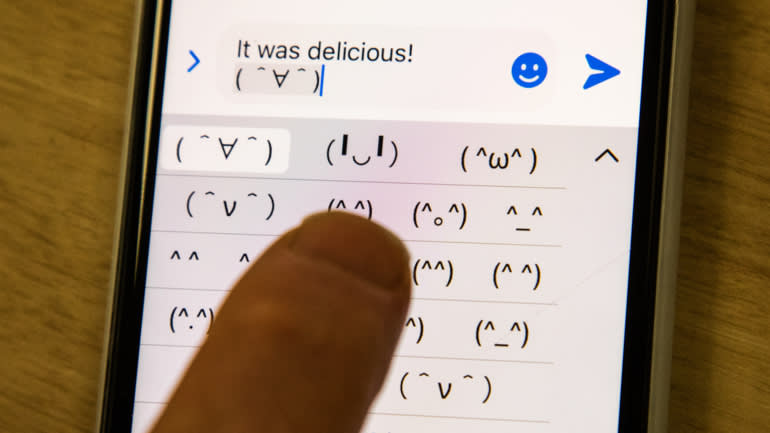 Kaomoji, Japanese for "face character," first flourished when pagers became all the rage in the country. Once complex and time-consuming to use, these text-based emoticons now often come "preassembled." (Photo by Yuki Kohara)

Email began to strip away at this subtlety, encouraging a more informal style without these conventions. At the same time, in the mid-1990s, small pagers became all the rage in Japan, especially among girls. They loved the heart icon in the messaging function and avidly created emoticons and kaomoji using the keyboard, according to Shigetaka Kurita, creator of the first widely used set of emoji. "That was my main inspiration," he told The Guardian newspaper years later.

Emoticons and simple kaomoji became a way of softening written messages by adding pictograms, but they were complex and time consuming to use because you had to enter multiple characters on a keyboard. Mobile phone operator NTT Docomo had turned to Kurita, a 20-something employee, to solve its very Japanese problem -- how to render these unsubtle symbols of subtle emotions.

It tasked Kurita with creating single graphics to use instead of typed-out emoticons. He developed the idea of using simple picture symbols, or emoji -- the word derives from the Japanese characters for "picture" and "character" -- requiring one click to express a range of emotions. What he did not know was that he was changing the way people communicated.

"We already had the experience with the heart symbol, so we thought it was possible," Kurita said in a 2013 interview. Not being a designer, he borrowed symbols prevalent in Japan, utilizing manga comics, kawaii (cute) culture, street signs and Japanese letters that an entire generation had been raised on.

Other Japanese carriers responded by creating their own designs. Propelled largely by young Japanese women, emoji were ubiquitous in Japan by the early 2000s, but not yet ready to emigrate to global stardom.

The trigger was Apple's 2008 launch of the iPhone in Japan, which was unpopular with consumers because it did not include emoji. That changed after an intervention by Masayoshi Son, president of Apple's Japanese partner SoftBank, who told journalists that he "convinced Apple that email without emoji isn't email in Japan."

Soon it added emoji for the Japanese market, and the idiosyncratic Japanese phenomenon became an international communications sensation in 2011 when Apple put an emoji keyboard on its worldwide iPhone operating system. Within a few years the original emoji had been placed into the collection of the Museum of Modern Art in New York and, in 2017, the expanded range was headlining in its own Hollywood film. 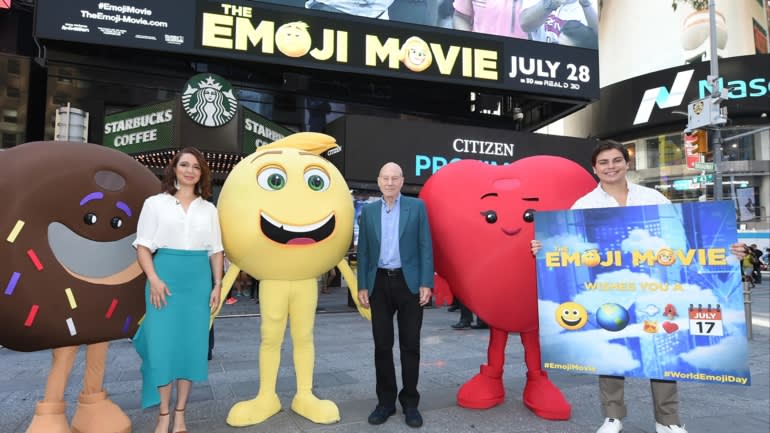 Emoji had become such a cultural phenomenon by 2017 that they were headlining their own Hollywood film.   © Getty Images North America

"What makes [emoji] unique is that they globalized differently from most Japanese pop culture," according to professor Freedman. "Unlike Godzilla and Hello Kitty, they aren't about industry and commerce. They blend into our lives and live with us in our phones as part of our daily communication."

One of the biggest forces in emoji culture today is Line, a messaging app developed by Naver, South Korea's largest search engine company. It attracted 300 million users worldwide within three years of its introduction, according to Line Corp., facilitated by Line stickers -- supersize emoji with characters experiencing various emotions and actions -- that tapped into the Japanese love for visual shorthand. It has 82 million Japanese users per month, the company said, and with the recent announcement that Line will merge with SoftBank Corp.'s internet subsidiary Yahoo Japan in 2020, that figure is likely to grow.

Instead of saying "I'm sad," which is often uncomfortable for reserved people, Line users could use a cute picture of a sad bear instead. Line Friends -- initially a straight-faced bear (Brown), a female white rabbit (Cony), an androgynous character (Moon) and a narcissistic man (James) -- became part of people's lives, offering a broad range of emotional nuance.

BuzzFeed copy chief Emmy J. Favilla said in a recent style guide: "Emojis are by no means taking away from our written language but rather accentuating it by providing a tone that words on their own often cannot. They are, in a sense, the most evolved form of punctuation we have at our disposal."

Line's move to monetize its stickers as early as 2013 was a turning point. While it still offers some stickers for free, Line began selling packages of them that can also be given as gifts. You can buy them with Line coins, which are purchased -- 100 for 240 yen -- or accumulated by winning games.

Line Friends, which have expanded across Asia with local versions, have crossover potential: In a collaboration with K-Pop sensation BTS, the group's members created their own stickers and sold 8 million downloads in 10 days, according to Line. Line said the BTS coup embodied the key Line Friends philosophies -- "Global, Millennial, Trend." 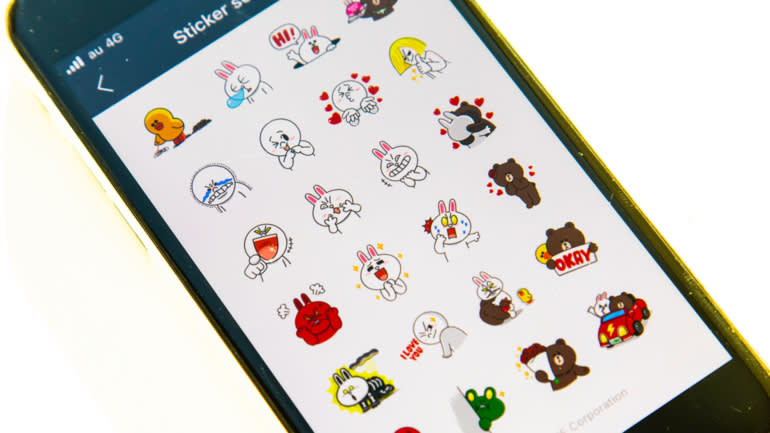 The cast of characters that make up Line Friends have become part of people's lives and how they communicate. (Photo by Yuki Kohara)

Cultural historian and author Roland Kelts says young people in Asia "tend to live in rapidly alienating environments" as they move to hectic urban areas, so "emoji and Line characters may fulfill a desire to express impulsive emotions and connect with others fast, without the rigid formalities or hierarchies of language."

Behind the stickers sit creators. While Kang "Mogi" Byeongmok is credited with designing the original Line stickers, he remains an obscure figure as a corporate executive who is "highly unreachable," according to Line. But those designers working in the Line Creators Market, through which users can sell their own stickers, sharing profits with the company, are less inaccessible.

"oyspe and ahoy!" is the pseudonym for a Tokyo office worker and mother who has been a Line sticker contributor from the beginning. Her most successful character, KumaKichi, is a charming bear.

"Although its characteristics are largely reflected from myself -- clumsy, goofy and with some negative thoughts -- its movement and appearance are mainly inspired by my 4-year-old son's mysterious movements," she tells the Nikkei Asian Review through official Line representatives. "I record them on my phone and later reference them while drawing." Designers can sell their own stickers through the Line Creators Market. KumaKichi, a popular bear character, is the work of a Tokyo office worker and mother who sells her stickers under the pseudonym "oyspe and ahoy!" (Photo by Yuki Kohara)

Line was not forthcoming regarding how much a creator might earn, but did say that in the first six months after Line Creators Market was launched, the top-10-ranked sticker sets had an average of 36.8 million yen ($340,000) in sales. For the top thousand, it was 2.7 million yen. Creators and Line share the revenue equally.

"Unfortunately, I don't have enough sales to quit my job and concentrate on making stickers," oyspe and ahoy! acknowledged.

Digital creatives aside, there is always money to be made bringing the digital experience to everyday life. Line has 150 retail stores spread from New York to Shanghai, with items ranging from fashion to electronics featuring Line Friends characters.

In Tokyo's Harajuku store, housewife Masumi Tamaki, 50, says she loves the stickers because they are cute, interesting and easy to use: "When I'm excited about something they seem to express my emotions most simply."

This article has been updated with the correct number of Line users in Japan.