TOKYO/BEIJING -- As more countries move to block the products of China's Huawei Technologies from their markets amid growing U.S. pressure, the repercussions threaten to hit the cross-border supply chain of an industry giant eyeing $100 billion in revenue this year.

Less than 24 hours after the arrest of Huawei Chief Financial Officer Meng Wanzhou in Canada came to light Dec. 5, a list of the company's key suppliers, compiled by Goldman Sachs, was making the rounds at global brokerages.

Mixed in among such Chinese names as BYD were many foreign big multinationals, including U.S.-based chipmakers Broadcom and Qualcomm, Japan Display and South Korean memory chip supplier SK Hynix.

Huawei reported sales of 603.62 billion yuan ($87.4 billion at current rates) last year -- not far off from Microsoft and Google parent Alphabet, although less than half as much as Apple. Its two biggest telecom equipment rivals, Nokia and Ericsson, had net sales of 23.1 billion euros ($26.1 billion) and 201.3 billion krona ($22.2 billion), respectively, last year.

It ranks as the world's top seller of base stations for wireless networks with a 28% share, the No. 2 maker of smartphones and routers, and the fourth-largest server manufacturer. But the Shenzhen-based company faces bans in such areas as 5G wireless network projects and government procurement in a growing number of countries, including the U.S., Japan and Australia. 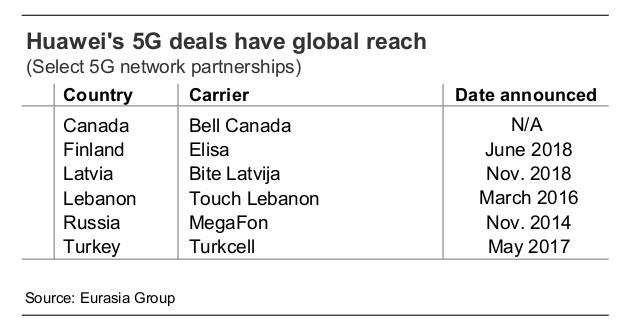 Privately owned Huawei spent $14 billion on outside procurement of semiconductors alone last year. Much of this came from American companies, with $1.8 billion in purchases from Qualcomm and $700 million from Intel, according to Chinese media.

This may prove a dangerous vulnerability if U.S.-China tensions heighten further. Huawei compatriot ZTE, which also relies heavily on foreign chips, was forced to suspend production and driven to the brink of bankruptcy when the U.S. in April barred it from doing business with American suppliers as punishment for violating sanctions against Iran and North Korea.

Founded in 1987 by former People's Liberation Army engineer Ren Zhengfei, Huawei has had success developing its own advanced chips at design subsidiary HiSilicon Technologies. But production of its designs is outsourced to such companies as Taiwan Semiconductor Manufacturing Co. And Huawei continues to rely on outside sources like Broadcom for the majority of its chip needs.

This extensive supply chain not only leaves Huawei exposed to the kind of ban the U.S. slapped on ZTE, but also ensures the impact of such restrictions are felt far beyond the company.

Huawei is far larger than ZTE, with more than five times its annual sales. Huawei reportedly accounts for about 5% of sales at Qualcomm.

In Japan, it generates several percent of revenue at TDK and Japan Display, which supply batteries and smartphone LCD panels, respectively. Shares in TDK and SK Hynix have slumped around 10% since news of Meng's arrest emerged.

Huawei's procurement from Japanese companies totaled about 500 billion yen ($4.41 billion) last year, and the company has indicated it plans to double purchases from some suppliers by 2020. A slowdown in its sales or capital spending would hit a broad swath of industries.

Even as the U.S. and China look to de-escalate their trade war, Meng's arrest has prompted retaliation by some Chinese companies, which are urging employees to boycott Apple products and buy Huawei instead.

In addition to Huawei, four other companies are subject to the ban passed by U.S. lawmakers this summer: ZTE, Hangzhou Hikvision Digital Technology, Dahua Technology and Hytera Communications. All five are key to Beijing's "Made in China 2025" high-tech manufacturing initiative.

Each of the companies covered by the ban is involved in China's national security and receives state support.

Hikvision, which is more than 40% controlled by state-owned companies, is the world's leading maker of security cameras and offers image-analysis technology powered by artificial intelligence. Privately run Hytera boasts world-leading production capacity for specialized wireless communications technology used by police and the military.

Hikvision and Hytera in recent years have both acquired foreign peers -- something that Beijing normally puts strict limits on -- to expand their technological capabilities and overseas presence.