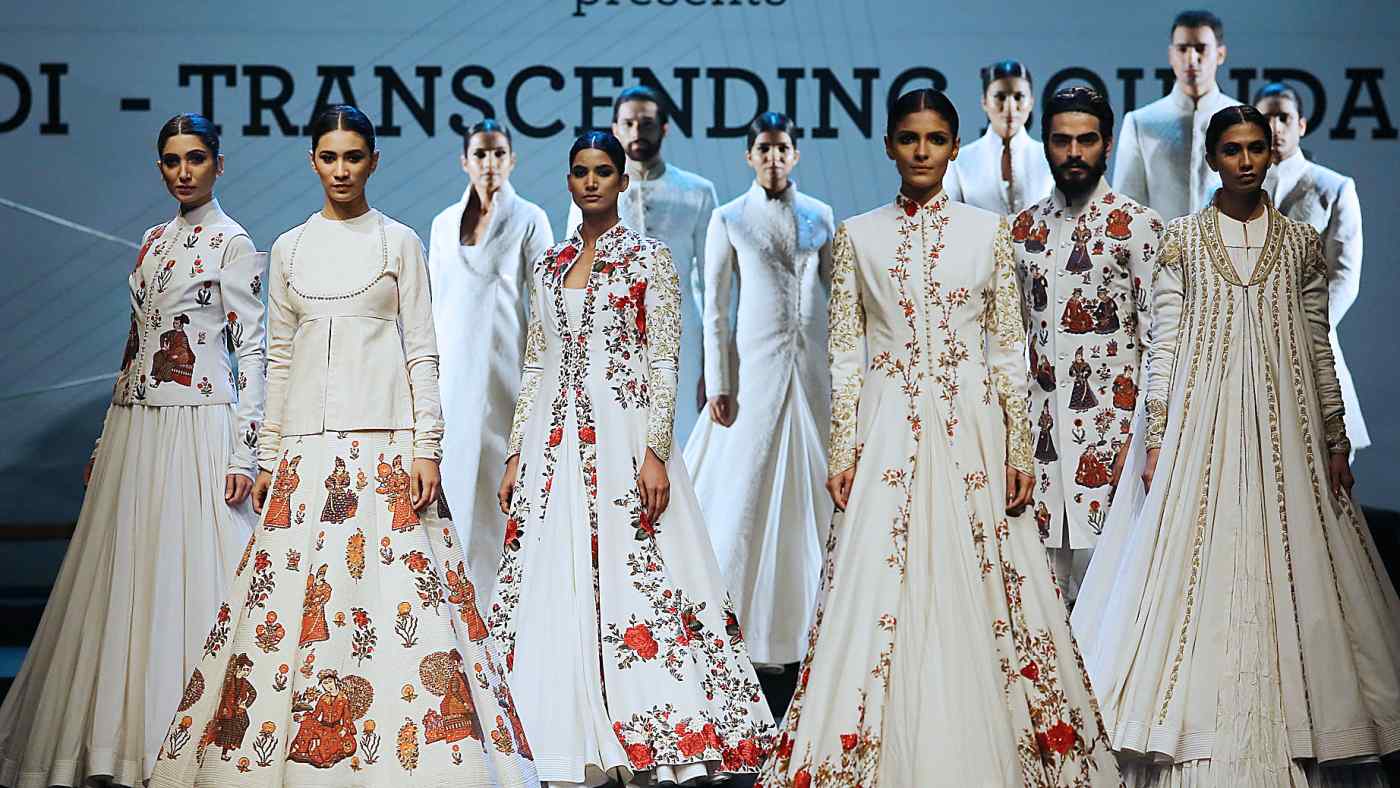 Modi not only sports crisp khadi outfits himself but also encourages other Indians to wear the indigenous cloth known for its coarse texture and natural luster. Companies and designers are now seeking to exploit a growing interest in the fabric, which has seen a sharp spike in sales in recent years.

From 2004 till 2014, annual growth in sales of khadi products averaged 6.68%. But since 2015 onward, the average is 37.1%, said Vinai Kumar Saxena, chairman of the government's Khadi and Village Industries Commission.

No leader in the last 60 years has done as much to promote khadi as Modi, according to Saxena. Since taking office in May 2014, the prime minister has served as a salesman of sorts for khadi, which is produced mainly by a cottage industry of spinners in rural villages. His catch lines like "khadi for nation, khadi for fashion" have aroused interest in the traditional fabric among youth and drawn top clothing designers hoping to cash in on an emerging trend.

This year, khadi for the first time entered Lakme Fashion Week in Mumbai, with labels such as Lars Andersson, Buna, The Third Floor Clothing and Jewellyn Alvares showcasing collections made of the humble fabric.

Khadi is spun from natural fibers such as cotton, silk and wool on a hand-driven charkha, or spinning wheel, which was a symbol of national self-reliance during India's freedom movement in the first half of the 20th century. Gandhi appealed to Indians to boycott clothes produced in British mills and wear indigenous apparel instead. Now, the khadi business is booming. Sales rose threefold to 25.09 billion rupees ($349 million) in the financial year ended in March, from 8.11 billion rupees in March 2015. The goal now is to double sales in two years, according to Saxena.

"This year we are targeting around 35 billion rupees [in turnover]," he said. "Hopefully, we will achieve 50 billion rupees in sales in the next two years."

The government's khadi commission, which procures the fabric from 2,600 affiliated suppliers and sells apparel and other products through its 8,060 outlets across the country, aims to create employment for as many people as possible in poverty-stricken rural India.

"After 'khadi for nation and khadi for fashion,' now it is becoming 'khadi for transformation'," Modi said in one of his radio addresses to the nation. "Khadi and the handloom have transformed the lives of the poorest of the poor and are emerging as a powerful means of empowering them."

Private companies, meanwhile, see a broader market for khadi. Saxena said the commission has signed agreements with apparel groups Raymond, Aditya Birla Fashion and Retail and Arvind Mills. "They are buying khadi from us and selling it abroad as well through their stores overseas," he said.

Last year, Raymond bought 726,000 meters of fabric from the commission, and the commission's agreement with Arvind Mills is for 1 million meters annually. These big orders have helped revive 326 "dead" khadi suppliers, according to Saxena.

The commission has partnerships with retailers like Big Bazaar of Future Group and Rajan Raheja Group's apparel chain Globus, Saxena said. "Since demand for khadi is growing, these companies are also keen to join hands with us."

The commission recently signed a 440 million-rupee agreement with Indian Oil, Saxena said. The company "had been giving its employees 10,000 rupees as a bonus every year," he said. "Instead, we requested them to give their staff khadi coupons worth 10,000 rupees, on top of which we give 25% discounts."

Ritu Beri, an internationally recognized Indian fashion designer, is also working with the commission and has launched exclusive khadi products for it.

According to Aashima Dahiya, a New Delhi-based fashion designer, khadi keeps the skin feeling cool in summer and warm in winter. Wearing the traditional fabric is no longer limited to politicians, journalists and activists, as was the case decades ago.

"Now, designers are experimenting with the fabric, which has caught the fancy of the youth," she said, pointing out that Bollywood is showing its love for khadi. Actress Kangana Ranaut is set to wear khadi outfits in an upcoming biopic on Rani Laxmibai, a prominent 19th-century freedom fighter.

At the India International Trade Fair in New Delhi in November, visitors thronged khadi vendors. "I'm not really into saris but couldn't stop myself buying one in khadi silk," said Debolina Dey, a homemaker who purchased the 2,500-rupee garment from an outlet of the West Bengal Khadi and Village Industries Board.

Dulal Sarbagyano, the vendor's manager, said women are particularly interested in khadi products from the eastern Indian state "because of their unique designs and good quality."

On Sept. 17, the prime minister's 68th birthday, the khadi commission released a "Modi jacket" in some of its stores, including in New Delhi and Mumbai. "Modi jackets have become very popular, and about 1,400 to 1,500 of them are sold every day," added Saxena.

Though the cloth is still handmade, newer methods have improved productivity. Single-spindle charkhas are being replaced with spinning wheels having spindles to help khadi artisans -- who number nearly 500,000, many of them women -- increase their income, according to Saxena.

With a single-spindle spinning wheel, a village woman can make only four to five hanks a day (one hank is equal to 1,000 meters of thread) at a rate of 7.50 rupees per hank.

"With an eight-spindle charkha, eight hanks are prepared at one go," Saxena said. "So a woman making a minimum of 25 hanks sees her income goes up by 150 rupees a day. Plus we give a 29% incentive on what she has produced."

Saxena described khadi as the most environment friendly fabric, with "zero carbon footprint."

"There's no emissions and no electricity [used]," he said. Making 1 meter of cloth requires 3 liters of water, compared with 56 liters of water for fabric made in mills, he added.

The commission has organized khadi exhibitions in a number of countries, including the U.S. and U.K., to familiarize people abroad with the fabric. A khadi fashion show was recently held in Johannesburg, he added.

"The advantage with this fabric," Saxena said, "is the brand ambassador of khadi is none other than the prime minister of the country."