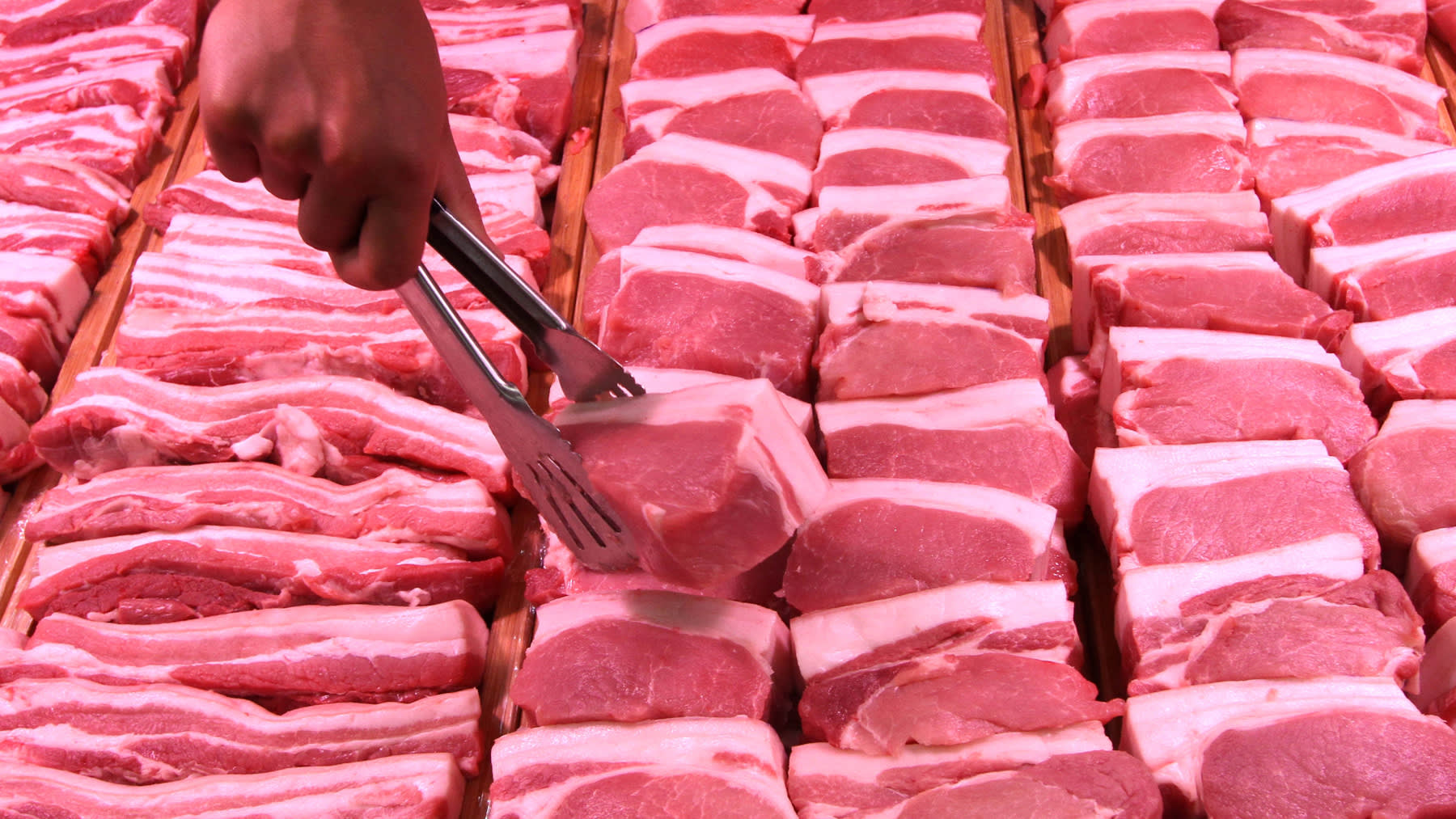 A meat seller lifts a pork slice with tongs at a supermarket in Handan, Hebei province. China is stepping up imports of beef, pork and poultry to make up for the decline in its pig herd from a swine fever epidemic.   © Reuters
YUSUKE HINATA, Nikkei staff writerSeptember 24, 2019 02:02 JST | China
CopyCopied

This comes at a time when China is stepping up imports of beef, pork and poultry to make up for the decline in its pig herd from a swine fever epidemic. The world's most populous nation's buying spree has pushed up prices of various types of meat, creating far-reaching repercussions for the global economy.

Planet Green, a vegetarian restaurant in Shenzhen, is one establishment seeking to satisfy customer appetite with vegan alternatives.

Despite an 88 yuan ($12) price tag, compared with the 10 to 50 yuan burgers available at fast food chains, Planet Green has sold more than 10,000 of the artificial meat burgers since they were added to the menu this month.

A woman in her 20s who had just eaten a vegan burger at the restaurant was satisfied. "I was surprised by how good it tastes. I thought it was real meat!" Hong Kong vegetarian chain Green Common is also incorporating more artificial meat into its menu. One of its most popular offerings is the New Hakata Ramen, featuring a topping made from Omnipork. The meat alternative is derived from soybeans, peas, mushrooms and rice, and is almost indistinguishable from real pork once cooked.

Right Treat, a Hong Kong startup specializing in artificial meat, spent over two years developing the product. The company began selling Omnipork to restaurants in Hong Kong in 2018, and the product is now available at about 1,000 locations. It will go on sale in mainland China within the month.

"U.S. players like Beyond Meat have focused their research on the Western market, so their burger patties, for example, are very good," said Right Treat founder David Yeung. "We on the other hand have designed products to be used in Asian foods, like soup dumplings."

The plan is to soon expand into other Asian markets such as Thailand, Taiwan and Japan, and to make Omnipork available at 15,000 businesses by the end of next year.

"We will boost output by working with contractors across the world," Yeung said, adding that he is more interested in gaining an upper hand in production know-how than in physical facilities and capital. He said he was open to all fundraising options "if they will advance the company and eco-friendly foods." "We're not trying to turn everyone into vegetarians," he said. "The goal is to decrease the consumption of animal meat as much as possible to ease environmental pressures."

Artificial meat has been popping up in a wide range of food products in China, including burgers, soup dumplings and dan dan noodles. Beijing-based startup Zhenrou debuted mooncakes featuring plant-based meat this month, which were jointly developed with a traditional confectioner in Shanghai.

The boom is fueled partly by surging meat consumption in China. The average Chinese person now eats 74 kg of pork, chicken or beef a year, up 30% in 15 years. The country has become one of the world's largest meat importers. An outbreak of African swine fever is also tearing through hog herds, roughly doubling the price of pork in the last year.

Artificial meat currently costs about 50% more than regular meat. But companies are working to narrow the gap. Right Treat will be slashing prices by 12% in mid-October. Meanwhile, Western players have also begun to eye the Chinese market. Beyond Meat wants to expand sales on the mainland in partnership with Hong Kong's Green Common.

The growing interest in artificial meat is apparent in the stock market. Yantai Shuangta Food has seen its stock price more than triple from the beginning of the year. WH Group, China's largest meat processor, has enjoyed a more than 20% boost.

Outside China, Beyond Meat's market capitalization soared past $10 billion at one point after its May debut on the Nasdaq.

The global market for artificial meat is expected to grow 80% to $21.2 billion between 2018 and 2025. Industry players believe that the field, just like the high-tech sector, could eventually turn into a two-horse race between U.S. and Chinese players.