TOKYO -- Smartphones have long sported liquid crystal displays for their screens, but a next-generation technology is gaining ground and will likely get a further boost when it is adopted in new iPhones.

Major LCD panel maker Japan Display announced plans last December to turn Joled, a manufacturer of organic light-emitting diode panels, into a subsidiary. Joled had been created through the merger of Panasonic's and Sony's OLED operations.

"We will be able to offer options for all displays," said Japan Display Chairman and CEO Mitsuru Homma at a news conference, explaining the reasoning behind the move. 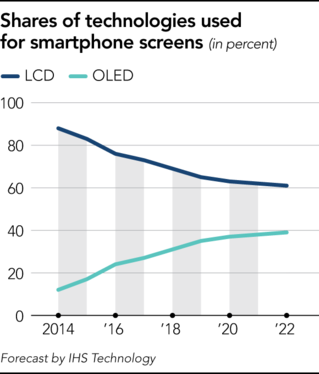 Japan Display's strength has been small and midsize low-temperature polysilicon, or LTPS, panels -- an energy-efficient type of LCD used in such devices as smartphones. Yet it decided to acquire an OLED business because Apple is expected to use OLED displays in its iPhone for the first time starting with a model due out this fall. OLEDs are said to produce vivid colors and are energy-efficient.

LCDs are projected to account for 73% of smartphone panels in 2017, down 3 percentage points from the prior year, while the share held by OLED displays will likely rise 3 points to 27%, according to research company IHS Technology. Of all liquid crystal displays, the LTPS panels' share is seen slipping 1 point to 31%. In 2018, LTPS and OLED panels are expected to be even, with OLED displays holding a 5-point lead with a 35% share in 2019.

OLED displays are in short supply partly because Chinese smartphone makers have also begun using them. South Korea's Samsung Electronics has begun boosting output capacity by more than 50% at a cost of about 8 trillion won ($7 billion). Chinese players such as BOE Technology Group are also building new plants.

The large-lot price of 5.5-inch OLED displays, the size used in high-end smartphones, is about 30% higher than that of comparable full high definition LCDs. But the price gap will likely narrow in line with increased OLED panel production.

Meanwhile, LCD makers are improving the performance of their products. Japan Display plans to launch LCD panels this year with extremely narrow bezels -- the frames that surround the screens. "They will look just like OLEDs," said Yasuo Nakane, a senior analyst at Mizuho Securities.

In the future, the focus will shift to large TVs. At present, the price of 55-inch OLED panels for TVs is more than triple that of LCDs. The difference in production costs is more pronounced than for small and midsize panels. Whether OLED panels become popular in this area will likely depend on efforts to stimulate demand.