Developer concedes Modi's ambitious 2022 goal may be in jeopardy

NEW DELHI -- India may have to settle for opening only a portion of its first high-speed railway, as project leaders race to meet Prime Minister Narendra Modi's ambitious target launch date of August 2022.

Achal Khare, managing director of National High Speed Rail Corp., suggested in an interview with the Nikkei Asian Review that this could be a solution given various challenges to the project.

"It is the first high-speed rail project in India," Khare said, explaining the possibility. "Extensive trials are required. We need to complete some sections beforehand for such trials."

The railway is to span a 508 km stretch from Ahmedabad, Modi's stronghold, and the country's commercial capital of Mumbai. It will be based on Japan's shinkansen bullet train technology, but the government wants to procure a certain portion of the hardware domestically -- one of several challenges facing the project.

A major issue is land acquisition. Khare expressed confidence that this would proceed smoothly, but landowners and other opponents have been putting up a fight. After the groundbreaking ceremony for the $15 billion project was held in late September at the Sabarmati terminal site in Ahmedabad, farmers and environmental activists staged protests. Local reports said some farmers demanded the government give their sons jobs in exchange for land.

"Actually, [many protesters] are not the people who are losing lands," Khare alleged. "Some other people, who are not affected by the project, are leading to confusion."

National High Speed Rail has been distributing pamphlets explaining the compensation that is available. "We are able to clear their doubts and neutralize the opposition," he said.

An insider familiar with the situation said such protests are common in India, adding that "some protests were supported by local politicians of the opposition party."

Either way, given the tight schedule, opening part of the test line might be an option. A project insider hinted that the likely route would cover some or all of the 200 km stretch between Ahmedabad and Surat, a city home to the world's largest diamond cutting and polishing center. 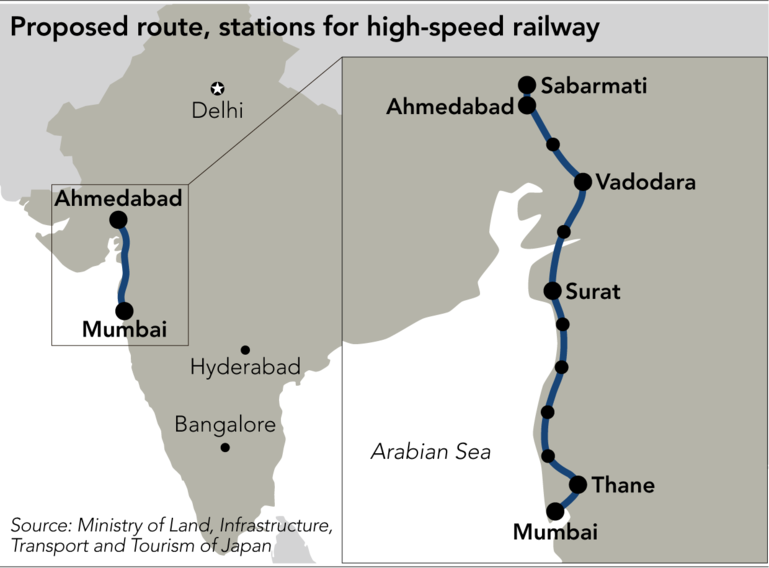 An economist at a local think tank predicted a partial opening would be a "game changer in Indian public transportation," stimulating demand for high-speed transportation and possibly accelerating the construction process.

Last December, National High Speed Rail started a joint measurement survey with state governments along the route, to determine exactly what land is needed. This task has been completed for more than 260 km out of 487 km, excluding an underground section, undersea tunnel in Thane near the Mumbai terminal, and wetlands where land need not be purchased. Khare hopes "to complete the JMS before the end of December 2018."

That would leave just three and a half years to complete the project, since Modi wants it ready for Aug. 15, 2022 -- the 75th anniversary of India's independence. A feasibility study had suggested a launch date in 2023.

For comparison, a 552 km Japanese shinkansen line took a full five years to build despite much easier land acquisition. 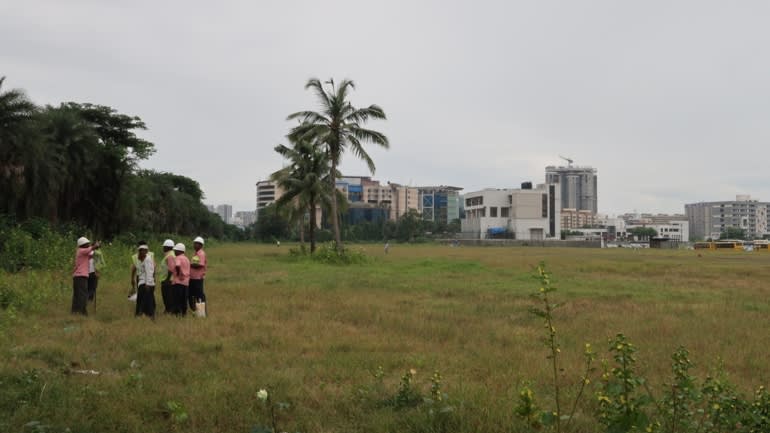 The site for the Mumbai terminal. (Photo by Go Yamada)

A host of technological challenges lie ahead as well. A senior official from Japan's Ministry of Land, Infrastructure, Transport and Tourism made no secret of his feeling that India's shorter construction period is far too ambitious, pointing to "not only the underground station in Mumbai and India's unprecedented undersea tunnel, but also difficult work such as elevated platforms over existing lines at the stations of Sabarmati and Vadodara."

A total of 24 trains, with 10 cars each, are to be introduced for the Ahmedabad-Mumbai route. The government wants six of them to be produced domestically.

The official assured on-time delivery of components. But some Japanese participants are worried about ensuring the same quality control that has kept Japan's bullet trains free of fatal operating accidents involving passengers for more than five decades.

According to Khare, many domestic companies have expressed interest in the tender for developing the station at Sabarmati, to be held this month. He said there are plans to build skywalks to connect the stations of two metro railway lines with the high-speed and other lines.

To secure revenue sources besides fares, National High Speed Rail is also looking to build cafes, restaurants, hotels and offices inside or around the station, Khare said. He considers it India's version of Tokyo's Shinagawa Station, a major railway and commercial hub.

"The concept is almost the same."