TOKYO -- Big construction equipment makers are moving aggressively into India to try to grab a slice of the demand created by the country's drive to build roads, railways and other infrastructure since Prime Minister Narendra Modi took office in 2014.

With building sites becoming less about human power and more about machines, demand for hydraulic shovels and other sophisticated construction equipment is growing. India is set to follow China's lead and develop into a huge market.

"It is like a construction equipment trade fair in China 10 years ago," said Hitachi Construction Machinery President Kotaro Hirano, who has spent many years in the country.

Hirano was at Excon 2017, one of Asia's largest construction machinery trade fairs, which was held in Bangalore in December. Most of the 40,000 visitors were builders, unlike similar trade fairs in developed countries, where most are parts makers.

Industry giants, including Caterpillar of the U.S., Volvo of Sweden and Sany Heavy Industry of China, set up huge booths outside the venue. At Excon, Caterpillar announced the launch of four new products for the Indian market. With safety features to prevent slipping and tripping, the machines are made for India's rough terrain. The company has a particular interest in road and rail projects in northeastern India, where weather conditions can be challenging. 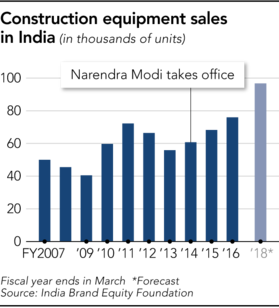 The start of the Modi government in 2014 transformed India's construction equipment market. The country's cumbersome bureaucracy has hindered development of infrastructure. The government announced plans to speed up the approval process and attract foreign capital in hopes of quickly upgrading the country's roads and rails.

One big project is a high-speed railway between Mumbai and Ahmedabad to be built based on Japan's bullet train system. There are also plans to improve airports and expressways in smaller cities.

Market researcher India Brand Equity Foundation estimates the country's construction equipment market will be worth $5 billion by fiscal 2020, up 70% from fiscal 2016.

That growth is both quantitative and qualitative. There is more machinery and it is more sophisticated. Builders are under pressure to use better equipment to make their operations more efficient, given tight deadlines for building subways and overpasses, for example.

In India, backhoe loaders, which have a front scoop that allows them to work as wheel loaders and an excavator-style digging mechanism at the back, have long been popular. 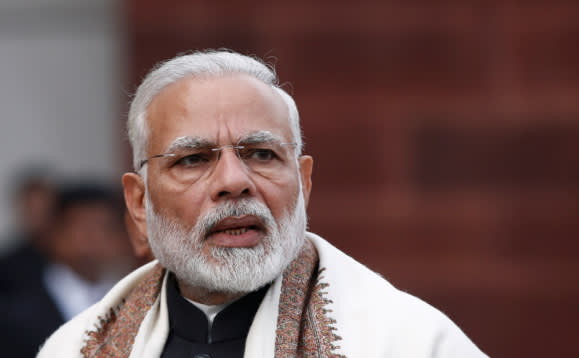 The start of the Modi government in 2014 transformed India's construction equipment market.   © Reuters

Tata Hitachi Construction Machinery, a subsidiary of Hitachi Construction Machinery set up in partnership with India's Tata Motors, holds a 40% share of the country's hydraulic shovel market. The company offers a range of equipment, from high-end to low-end. The plan is to start by selling cheaper gear and encourage customers to upgrade to more sophisticated equipment later.

Tata Hitachi has increased its production capacity by 40-45% over the past two years. Sandeep Singh, managing director of Tata Hitachi, said this year the company will be able to produce 10,000 vehicles, an increase of about 1,500 units from 2017.

Komatsu is also increasing production of hydraulic shovels at its plant in the southeastern port city of Chennai.

Backhoe loader maker JCB of the U.K., which holds the largest share of the Indian market, has introduced hydraulic shovels to try to lock in customers. Caterpillar, the world's largest construction equipment maker, has also come out with new hydraulic shovels in the country.

India accounts for a small portion of the manufacturers' total sales at present. It makes up just  7% of Hitachi Construction Machinery's sales, for example. Japanese companies, which grabbed a huge chunk of the market in Southeast Asia by getting in ahead of their competitors, face a tougher fight in India.