Government counts on private sector to foot most of $60bn bill

NEW DELHI -- As India's aviation market expands at the fastest pace in the world, the country plans to increase the number of airports to between 150 and 200 by 2035, from around 100 at present.

The expansion could cost more than $60 billion, with the private sector expected to foot most of the bill. To lure investment, the government hopes to implement policies to ensure that private investors can recover their money and earn solid returns.

"Ultimately, India should have 150 to 200 airports ... [in] the next 15 to 20 years," Jayant Sinha, India's state minister of civil aviation, said in a recent interview with the Nikkei Asian Review.

"In the next 12 months, we will have over 131 active airports," Sinha said, a number that includes airports already under construction.

A soon-to-open facility in the state of Sikkim offers an example of how connectivity stands to improve. The state, which shares borders with China, Nepal and Bhutan, has never had an airport. Travelers to the capital of Gangtok had to endure a bumpy, four-hour-plus ride from the nearest airport in Bagdogra, in neighboring West Bengal.

Now, the newly constructed Pakyong airport, near Gangtok, is scheduled to open in June. This will connect the airport in Kolkata, West Bengal's capital, with 70-minute flights.

"India posted the fastest domestic passenger growth in 2017 for the third year in a row, followed by China and Russia," said the International Air Transport Association.

The surge in passengers is largely attributable to heated competition among airlines, which has brought down fares.

In mid-2014, only seven airlines were flying domestically. By mid-2016, the number was up to 12. The Ministry of Civil Aviation said the average airfare fell 18% in 2016, from the year before.

It still costs considerably more to fly than to travel by train. The cheapest one-way air ticket from Delhi to Ahmedabad costs about 3,000 rupees ($46), while a basic train fare is just 475 rupees. But Prime Minister Narendra Modi's government is looking to narrow the gap under a policy launched last year. The idea is to offer government subsidies and cap fares at 2,500 rupees for hourlong flights connecting with rural towns. 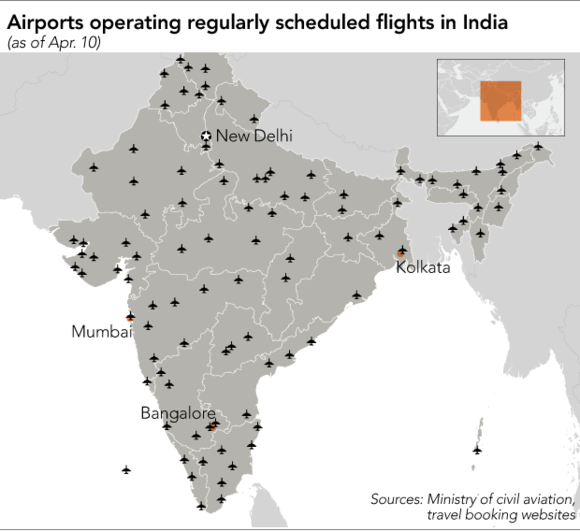 The current pace of passenger growth in India is likely to continue, according to Sinha, who said, "Over the next 15 to 20 years, the U.S., China and India will each handle more than 1 billion passengers."

Sinha stressed the need for more airports in the country of 1.3 billion people. "Ninety percent of Indians should be within 100km of an airport," he said.

The target of 150 to 200 airports is thought to include small airports, formerly excluded from past counts.

"We are designing 'no frills' airports [that can be constructed] at very low cost ... airports that handle three to five flights a day," he said.

Total investment may reach "4 trillion rupees ($61 billion)," according to Sinha. This is 60 times more than the ministry's fiscal 2018 budget.

An official at the ministry said, "A consultant is being appointed to estimate the projected demand across the country and in individual cities, determine required investments, identify possible sources of funding, and develop a regulatory architecture in consultation with shareholders."

"Most of it will be financed by the private sector," Sinha said. 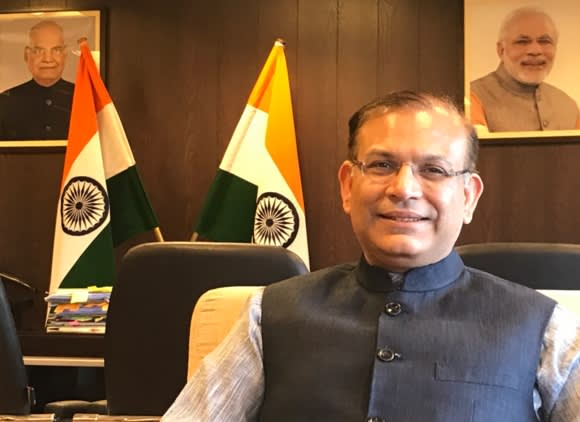 But questions remain as to whether private companies will heed the government's call for investment.

For the airport projects, the "private sector will invest as long as there is some clarity on economic regulations," such as rate of return and what kind of regulatory framework is in place, specifically whether regulations will apply only to aeronautical charges, or also retail duty-free charges.

India currently has five airports that are operated under public-private partnerships. Airports in Delhi and Mumbai were built and initially managed by the government, which later put management under private control. The private sector, meanwhile, constructed and managed airports in Bangalore, Hyderabad and Cochin from the outset.

The central government's Airports Authority of India and the local government's Telangana each have a 13% stake in Hyderabad's airport, while GMR Group, an Indian port operator, claims 63% and Malaysia Airports Holdings 11%.

According to Binit, the Indian government claims 4% of gross revenue from the airports in Bangalore and Hyderabad, and 37% and 46% from those in Delhi and Mumbai, respectively. He sees the rates for the latter are on the "high side" compared to global standards.

Keeping the rate low will be key to attracting domestic and foreign investors, with Binit warning that "if you can't build a viable business model after optimistic and aggressive bidding, that doesn't help anyone."

For the fiscal year ended March 2017, the return on assets of GMR Hyderabad International Airport came to 8.2%. The figure for Delhi International Airport, another subsidiary of GMR, was 4.9%, while the average of 50 companies comprising the Nifty50 stock index was 10.5%.

Even so, the planned increase in airports is not just an ambitious target but also an imperative in a country where civil aviation has spread. Assuming the expansion goes smoothly at existing airports, demand for flights is still expected to outpace capacity in fiscal 2022, CAPA said.

"India will require an estimated $36 billion to 45 billion investment in around 55 airports by 2030, used for expansion of existing airports and for creating of new airports," CAPA said, although the estimate is lower than the one projected by Sinha.

Under the circumstances, India may have no choice but to embark on medium-term airport construction as recommended by Sinha. 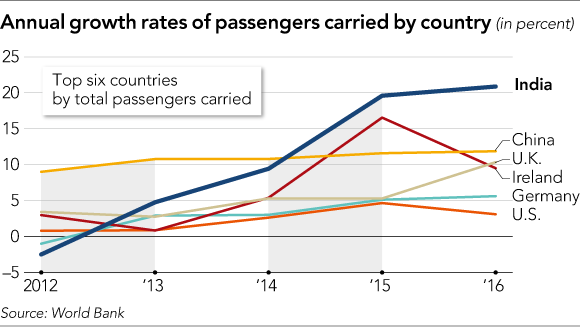 In other countries, private interest tends to center on airports in big cities where passengers and retail sales are expected to grow to certain levels.

Indeed, Binit said foreign players "may be interested in some of our larger airports."

But if private companies refuse to invest in smaller airports and the government is forced to foot the construction bills, India's fiscal deficit may rise.

Asked if there are risks of public debt growing as the result of government-funded local airports, Sinha demurred, saying that airports would "have to be commercial viable" to attract private investment.

As a way of lowering costs of managing local airports, Sinha said: "There are cross-subsidy elements as well, [in which] one large-hub airport can support a lot of smaller airports." This may force the government to consider having large airports partially assume operations and pay costs of nearby local airports.