NEW DELHI/MUMBAI -- With gold prices at a five-year high, demand for the precious metal has been lackluster during India's monthlong festive season, with small jewelers complaining of a more than 30% drop in sales this year.

India competes with China as one of the world's biggest importers of gold, and traditional sellers make up 70% of the Indian gem and jewelry market.

Merchants had hoped for a boost during the week of Diwali, the religious holiday known as the festival of lights. But the Confederation of All India Traders noted low customer turnout on Dhanteras, which marks the start of Diwali and is considered an auspicious time to buy gold.

"Market observers say that perhaps it is the most disappointing Dhanteras" in more than 10 years, the trade group said in a statement. Sales of gold and silver on Nov. 5 fell an estimated 30% to 35% from a year earlier, according to the confederation, which represents unorganized merchants.

Such standalone vendors have suffered this festive season as gold's price of nearly 33,000 rupees ($454) per 10 grams -- more than 2,000 rupees higher than last year -- discourages many from making a purchase. The Indian rupee has depreciated nearly 15% against the U.S. dollar this year, contributing to rising domestic gold prices.

This has made India's price-sensitive consumers reluctant to spend heavily on jewelry this season.

"Had the prices been on the lower side, I would have gone for more," said Shashi Sharma, a 48-year-old mother shopping at a Kalyan Jewellers outlet in New Delhi ahead of Diwali. She bought two pairs of gold earrings, one for herself and one for her 20-year-old daughter, for a total of 27,000 rupees.

Jewelers complain of weak demand for gold, which plays a cherished role in Indian culture and serves as a status symbol and an important indicator of consumer spending in the country.

"This festive season, our business was down 30% to 40%," said Soni Srivastava, whose family runs two jewelry stores in New Delhi. 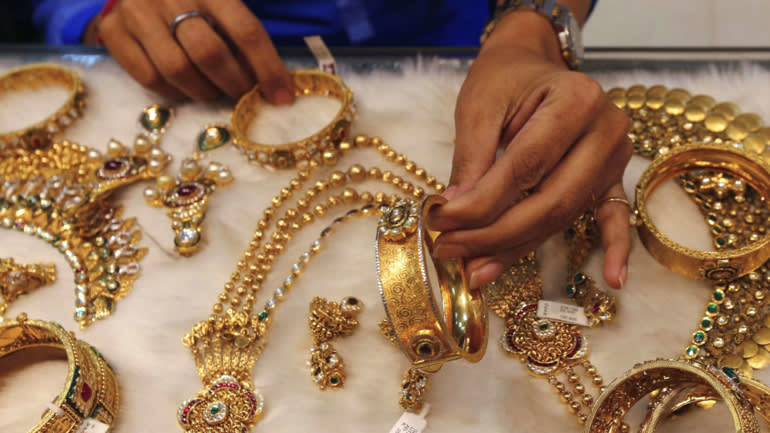 India's demand for gold has dulled since the country's removal of 500-rupee and 1,000-rupee bank notes in 2016 -- a drastic move by the Modi government to flush untaxed "black money" out of the financial system. The introduction of a unified goods and services tax last year dealt a further blow, especially to the unorganized sector, where cash dominates transactions.

"Ever since the demonetization exercise, we have not seen the customer rush in our store," Srivastava said, as a few of his old clients examined items in one of the shops.

Another standalone Mumbai-based jeweler was open for all the festival days around Diwali. Yet sales fell 15% to 20% this year at one of the jeweler's iconic stores at a posh site in the western city, said a store manager who requested anonymity.

"The last two years were difficult anyway because of demonetization and [the introduction of GST], and the effect was felt this year, too," the manager said. "We are feeling the heat in all our stores."

Modi's government is keen to boost consumption to maintain a fast pace of economic growth ahead of general elections in 2019.

Some mom-and-pop stores have resorted to discounts, a new tactic for them. Neha Bhatnagar, a woman who works in New Delhi, spent 38,000 rupees on a gold chain and a ring bought from a family jeweler.

"I received a message from our jeweler that he was giving a discount of 2,500 rupees on purchases of every 10 grams of gold jewelry, so I decided to buy some pieces," she said.

Organized sellers may have suffered less. G.V. Sreedhar, former chairman of the All India Gems & Jewellery Trade Federation, rated the festive season as neither poor nor great.

"It has been like last year or probably 0.5% to 1% more than last year," Sreedhar said. "Dhanteras looked good [for organized players], and we are hoping for the best [in coming days]."

Kalyan Jewellers, operating 103 stores across India, sees a steady shift of clientele from unorganized to organized players like itself. The retailer expects an 8% to 9% increase in revenue over last year based on early data, said T.S. Kalyanaraman, the chairman and managing director.

"We expect this growth trend to continue for the rest of the season," Kalyanaraman said.

India's gold demand grew 10% on the year to 148.8 tons in the July-September quarter, rising in early August when the domestic price dipped below 29,700 rupees per 10 grams -- the lowest since January, the World Gold Council said in a report released on Nov. 1.

But the price rose sharply in mid-August as the rupee depreciated against the U.S. dollar, the council said.

"Outside the traditional festival and wedding season, demand eased toward the end of the month and into September," it said. "Jewelry demand was further dampened by the inauspicious period of Shraaddh, a time when gold purchases are put on hold."