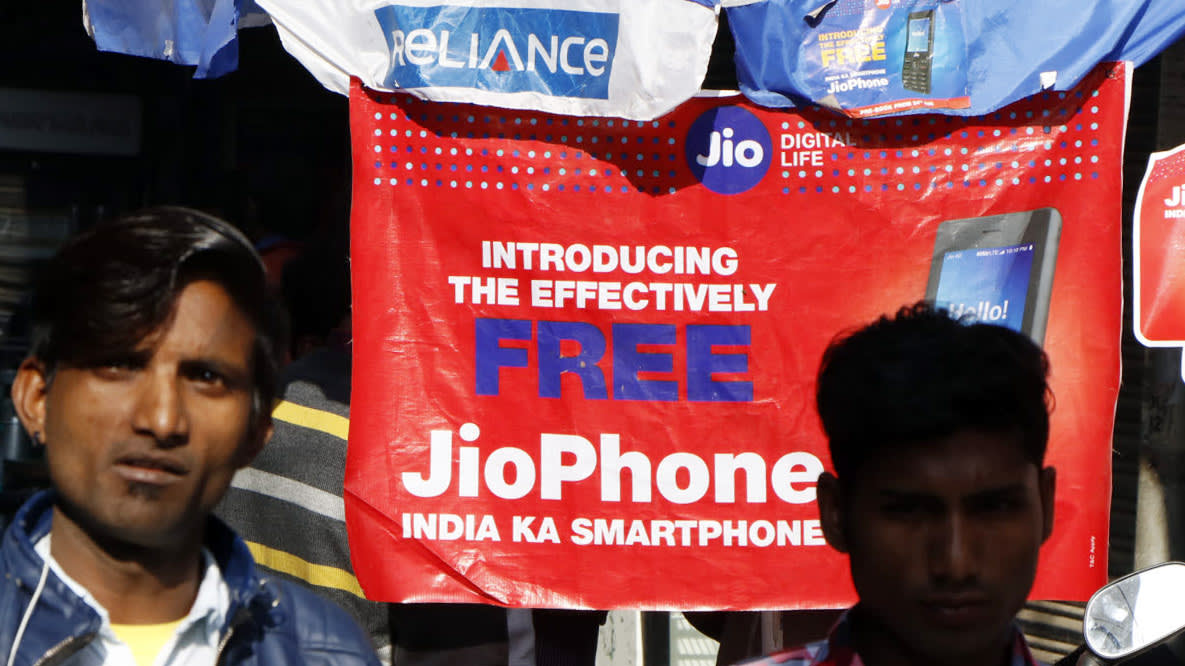 An advertisement for Reliance Industries' Jio telecom unit is seen in Mumbai. (Photo by Mamoru Yago)

MUMBAI -- Just when Indian telecom companies thought the price war unleashed by new player Reliance Jio Infocomm was over, the company -- owned by the deep-pocketed Mukesh Ambani -- cut prices further in the New Year, possibly setting off the final phase of hyper-competition for subscribers in the already low-tariff market.

Under its new offer, Reliance Jio will implement a 50-rupee ($0.79) price discount across its plans, or 50% more data at existing prices. That leaves its basic monthly package at 149 rupees, which Reliance Jio says is the lowest in the industry. 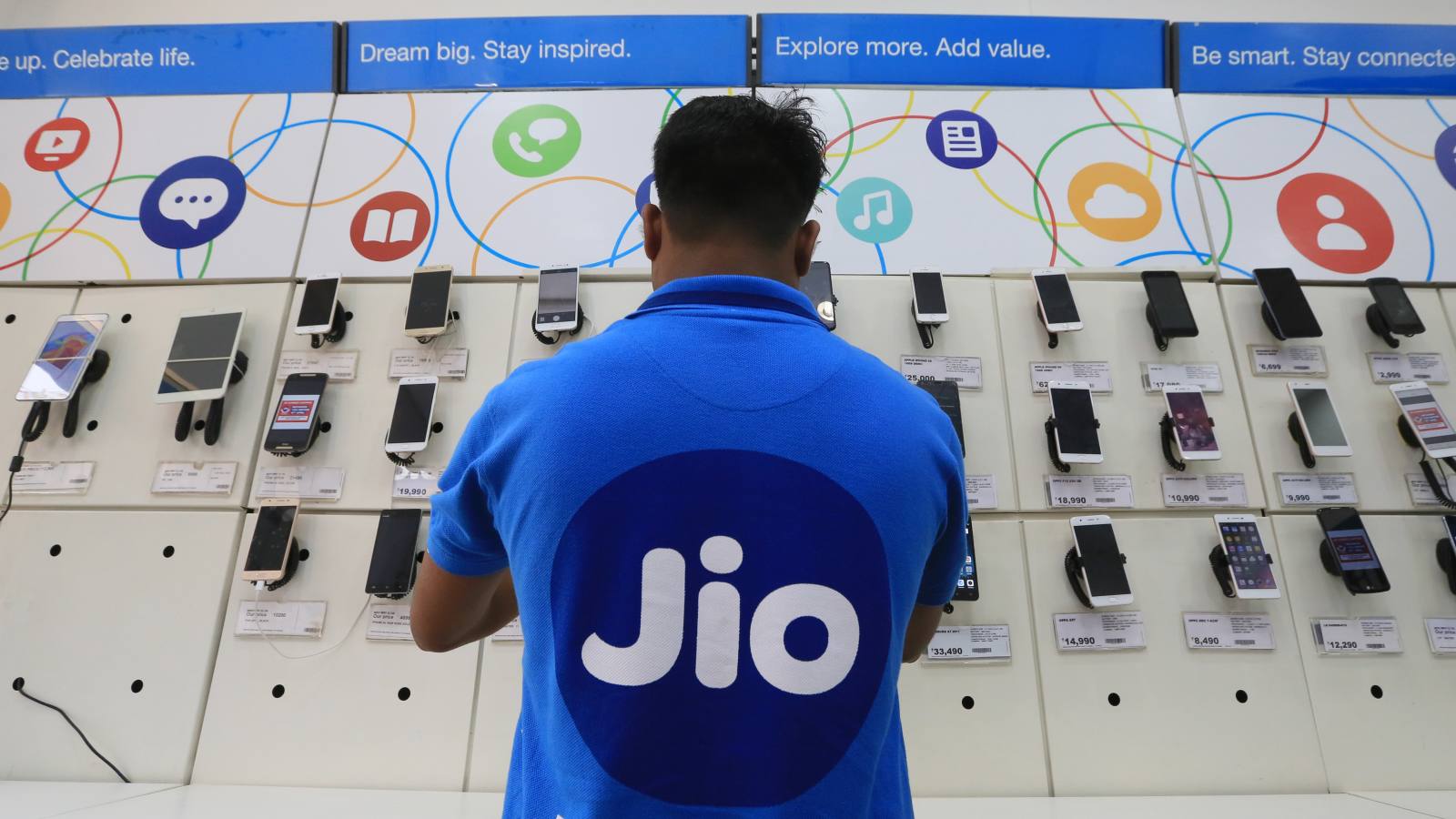 From its launch in September 2016 until March last year, Reliance Jio offered its services for free. It then started charging, but in October, following massive criticism from the rest of the industry over its ultra-low rates, Reliance Jio increased prices by 40%. It later reduced the validity of one of its plans to 49 days from 84 days, the first time since its ultra-low tariffs were introduced in April last year. The move raised hopes at most mobile service providers for a recovery in prices.

The latest rate cut by the telecom arm of Reliance Industries comes within days of it announcing it will buy the assets of Reliance Communications, led by Anil Ambani, younger brother of Mukesh, and which was on the verge of insolvency. Reliance Communications has announced its exit from the consumer mobile business along with the closure of services such as Tata Teleservices.

Mukesh, India's richest man, has driven his younger brother out of mobile business, but he has not stopped there. With the latest fee reduction, he intends to spur a shakeout in India's telecom market.

Many analysts think industrial reorganization is in its final phases. Some say the war of attrition triggered by Reliance Jio's aggressive pricing will leave just three or four big players: Bharti Airtel, Reliance Jio, and the merged duo of Vodafone and Idea Cellular. 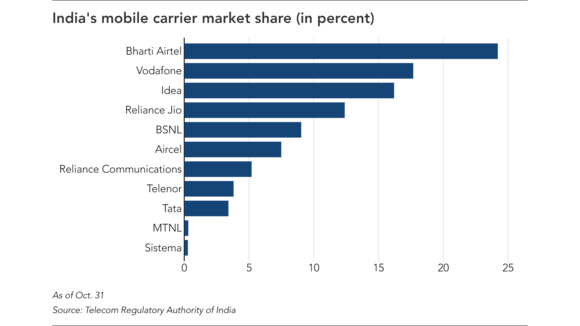 Reliance Jio's fresh price cut comes as a blow even for the likely survivors, which are already reeling under heavy debts and thin margins.

Incumbents such as Bharti Airtel, Vodafone, and Idea Cellular have been struggling to keep up with Reliance Jio's aggressive pricing strategy, but are not giving up, despite heavy pressure on profit margins.

Over the past month, Bharti and Vodafone have launched price plans offering unlimited voice communications and 1GB per day of data for 80-90 days at 450-500 rupees, a 11-15% premium to Reliance Jio. Idea's price plans are around a 23% premium, according to local brokerage Motilal Oswal.

Analysts at India Ratings point out that the hyper competition and price cutting have caused telecom companies to lose average revenue per user (ARPU). It noted that two large telecoms registered an ARPU decline of 25% for the quarter ended September from the same quarter a year earlier. Reliance Jio, on the other hand, reported a higher ARPU of 156 rupees ($2.45), compared with 84 rupees for the industry as a whole.

For the quarter ended September, Reliance Jio's standalone operating profit was 14.43 billion rupees with a margin of 23.5%, despite a loss of 2.70 billion rupees.

The company has been gaining significant subscriber market share in the last couple of months. As of October, its market share stood at 12.39%, the highest growth rate among the country's telecoms. It was just a few steps behind Vodafone's 17.68% and Idea Cellular's 16.20%. Bharti Airtel maintained its leadership position.

Analysts and incumbent companies are still wondering how long unlisted Reliance Jio's price offensive can go on. Reliance Jio's financial resources come from the cash-rich oil and gas business of its parent, Reliance Industries. But analysts question how sustainable this model will be in pumping money in over the long run.

Motilal Oswal is hoping rationality will prevail over the next two or three quarters, as Bharti and Vodafone-Idea should have steady data capacity, forcing them to drive growth by building ARPU instead of by undercutting each other.

India Ratings, though, believes large telecoms have prepared themselves for the continued challenging environment via asset monetization, and are looking at another tough year. Mounting pricing pressure, debt burdens and capital-outlay needs have already led to the exit of small telecoms from the market.