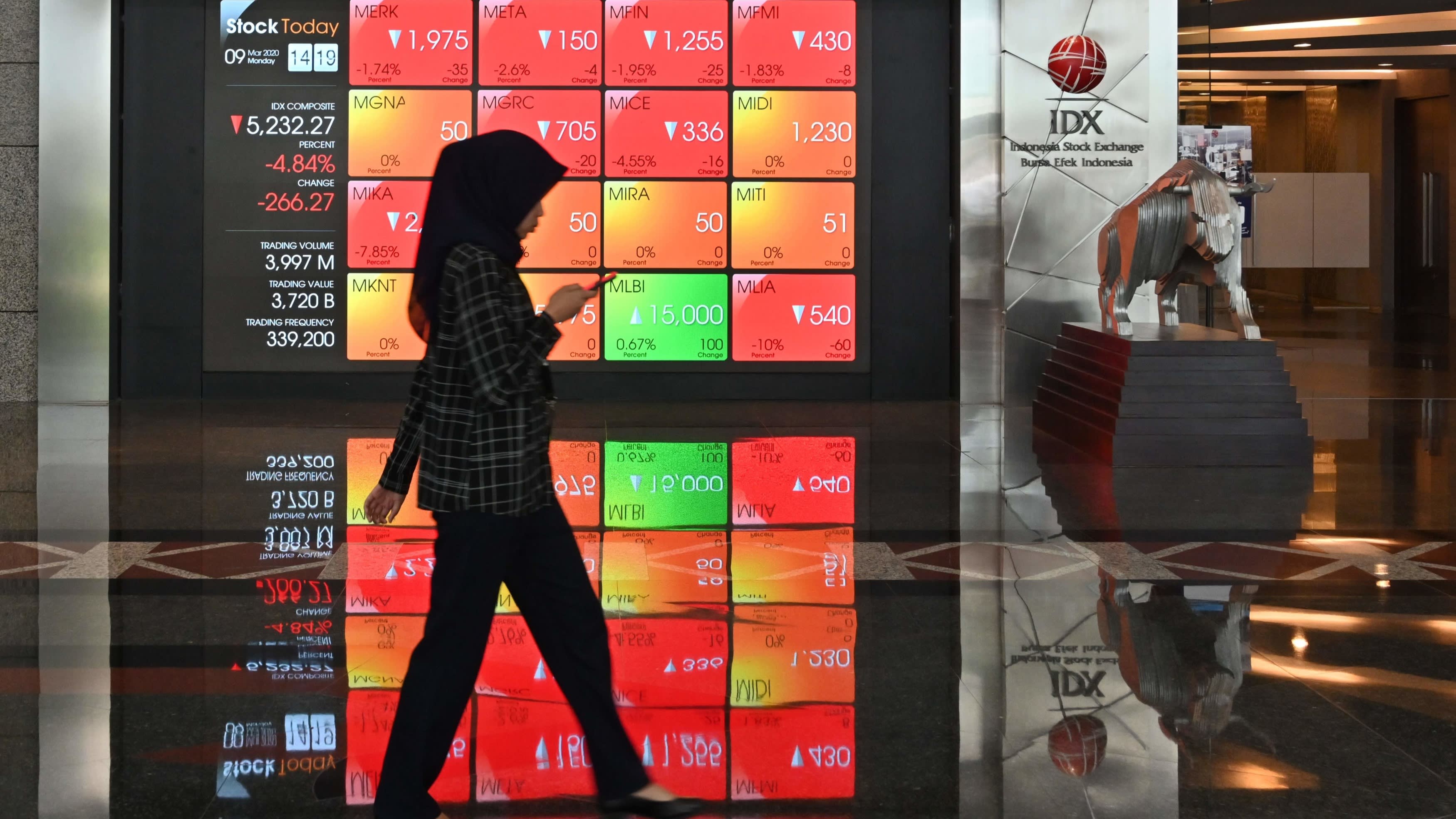 JAKARTA -- As the coronavirus pandemic prompted international investors to flee Indonesia, sending the stock market to an eight-year low, the directors of Aesler Group International, an architecture practice, held their nerve.

Despite the global uncertainty, Aesler on April 9 became the first company of architects to list on the Indonesia Stock Exchange. It has been one of 27 listings so far this year, a wave that has propelled Indonesia to the top of Southeast Asia's IPO rankings in 2020.

"This pandemic situation gives us the upper hand of delivering a unique architectural product that can be in high demand in the market right now, such as for hospital buildings, work-from-home apartment buildings, hygienic office planning," CEO Jang Rony Yuwono told the Nikkei Asian Review. "In fact, we have been receiving more projects this year than any other recent year."

Another 26 companies remain in Indonesia's IPO pipeline, which would bring the year's total to 53. That remains short of the exchange's pre-pandemic target of 78 for 2020 but represents only a slight dropoff from last year's 55.

Despite having Southeast Asia's most active IPO market, Indonesia brought in rather meager first quarter IPO proceeds, around $200 million in raised capital, less than Thailand's $2.3 billion -- thanks to the listing of Central Retail, the Stock Exchange of Thailand's largest-ever IPO -- and Singapore's $500 million, according to professional services firm EY. 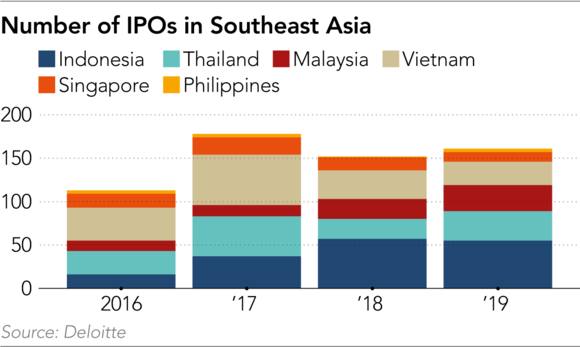 Indonesia's higher number of IPOs and its smaller average deal size over the past few years are "consistent" with the IDX's strategy "to broaden and deepen the base of investors and promote easier access to funding to small and medium enterprises," said Joe Lai, disruptive events assurance leader at Deloitte's Jakarta office.

This is a positive trend, Lai said, citing Indonesia's large population and low ratio of stock market capitalization to GDP. The direction, Lai said, "presents a huge opportunity for the government to increase its reliance on the domestic market" to finance the country's economic development.

The IDX, which a few years ago began striving to attract more domestic investors, is starting to see its efforts pay off.

The Jakarta Composite Index has lost 27% year to date, after recovering from an eight-year low in March, but that's far from the 50% plunge recorded during the 2008 global financial crisis, one index representative pointed out. The representative said this is mostly due to domestic investorsnow owning half of all stocks listed in the country.

"Our slogan is: don't wait until you become big. Become big [instead] in the Indonesian stock market," said IDX director I Gede Nyoman Yetna said during the virtual listing of payments startup Cashlez Worldwide Indonesia earlier this month.

The first payment fintech startup to be listed on the IDX when, raising 87.5 billion rupiah, Cashlez shares stood at 410 rupiah on May 12, a 17% increase from the offering price.

"We'll be able to keep innovating and develop our business," said Cashlez chief executive Tee Teddy Setiawan. "Including with the acquisition of STI that we think is very strategic to our business growth."

But after talking things over with its strategic investors, company secretary Andrew Djauhary said Bumi decided to move ahead, hoping to further capitalize on Indonesia's $23 billion e-commerce market which has grown at around 80% a year since 2017.

By the time Bumi's went public on April 25, there was so much interest that the shares were oversubscribed by 25 times. As of May 12, Bumi's share were up 39% from the 120 rupiah offering price.

"We're very optimistic with our 2020 financial performance target," Djauhary told the Nikkei Asian Review, adding that Bumi is targeting a nine-fold increase in net income this year -- from 3.94 billion rupiah booked in the first nine months of 2019.

With the company planning to use most of the 156 billion rupiah raised from the IPO to expand its landbank in East Java, Bumi is eyeing a move into greater Jakarta, Indonesia's megacity capital.

"The company is confident with its business, supported by e-commerce and third-party logistic businesses that remain highly promising," said Djauhary. 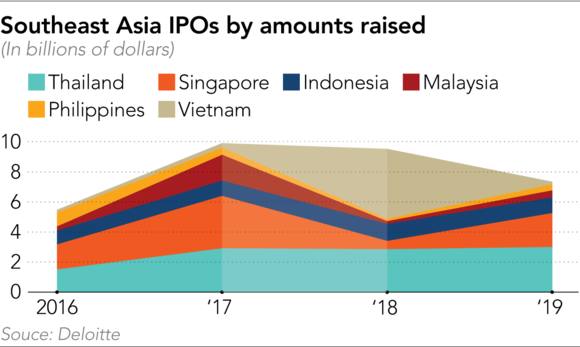 According to Deloitte's Lai, most of Indonesia's newly-listed companies were already in the final stages of listing before the COVID-19 outbreak.

"The urgent need of fresh funds for business expansion, growth and working capital, in particular during current unfavourable conditions, are amongst several reasons why they decided to list," Lai told Nikkei.

One such company is real estate developer Karya Bersama Anugerah, which saw a huge opportunity last year when President Joko Widodo announced that Indonesia's capital would be relocated to the province of East Kalimantan, on the island of Borneo, about an hour's drive from where the company is located.

Determined to be one step ahead of other potential investors in the $33 billion project, which has sparked the interest of SoftBank's Mayasoshi Son and U.S. giant asset manager BlackRock, Karya went public on Apr. 8.

The company said it will use the 152 billion rupiah in raised capital to expand its landbank around Balikpapan, the largest city in East Kalimantan, and to also complete a city residential project. Karya's share price has risen threefold the offering price to 298 rupiah as of May 12.

Not all of the newcomers have enjoyed the same luck.

Shares in furniture maker Cahaya Bintang Medan have lost 29% of their value since listing early last month, while Cipta Selera Murni, which holds the Indonesia franchise for Texas Chicken has seen its shares fall 10% from the April offer price.

Still, for architecture company Aesler, which appears to be directly benefiting from the overall increase in public health awareness, the decision to go public has definitely paid off.

Aesler's shares have surged nearly four times the offering price of 100 rupiah after its first week of trading, before gradually retreating to 240 rupiah on May 12. The JCI fell 1% during the same period.

With the company preparing to launch what CEO Jang Rony Yuwono calls a "game changer" virtual reality application in the third quarter that allows clients to enjoy virtual tours of buildings and project sites using advanced rendering technology, there might be more blue sky on the horizon. 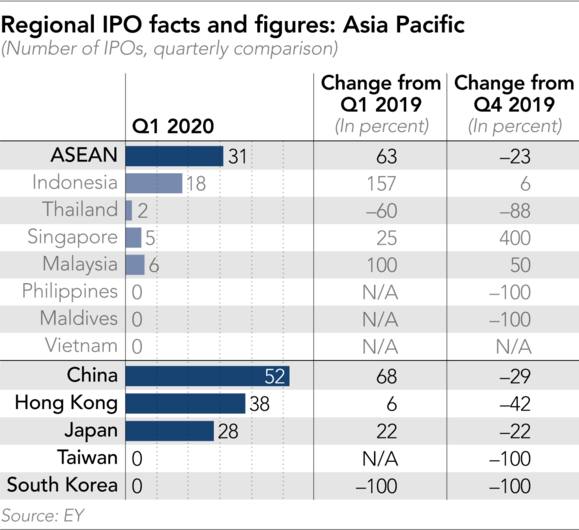