Indonesian state companies unite to take on Go-Jek and Ovo A new banking-telecom alliance aims to create a third bloc in a market that nearly quadrupled in size in the past year to 47 trillion rupiah ($3.34 billion) in transaction value.

Telekomunikasi Indonesia and Bank Mandiri, Bank Rakyat Indonesia, Bank Negara Indonesia and Bank Tabungan Negara will merge their different mobile payment services into one platform called LinkAja. The digital service is expected eventually to expand beyond payments and into other financial services such as insurance.

The move by four state-owned banks and the country's biggest telecommunications company reflects growing concern over the threat posed by the aggressive expansion of private companies into financial services in southeast Asia's biggest economy.

Indonesia is regarded as one of Asia's most attractive markets for digital payments, with roughly 91% of its 264 million strong population owning a mobile phone, but a heavier than average reliance on cash. Morgan Stanley estimated last year that only 2.1% of non-cash transactions in 2017 used e-money, but the share is forecast to rise to 24% by 2027.

However, epayment tools provided by the banks have struggled to make headway against the easy-to-use offerings from ride-hailing company, Go-Jek and Ovo, the service backed by Indonesian conglomerate Lippo Group.  While their exact market share is difficult to determine in the nascent market, industry analysts say the two private companies dominate mobile payments in the country.

The move by the state-owned companies is likely to have the support of the government, which has been pushing for an increase in cashless transactions. With nearly 50% of Indonesia's over-15 population lacking bank accounts, Jakarta is keen to promote digital wallets and cashless payments as a means to help the unbanked join the financial system.

Indonesia's digital payments grew 280% in value last year, while transaction volume increased 210%. Both Go-Jek's Go-Pay and Ovo have been able to leverage networks of consumer facing businesses to enlarge their user base. 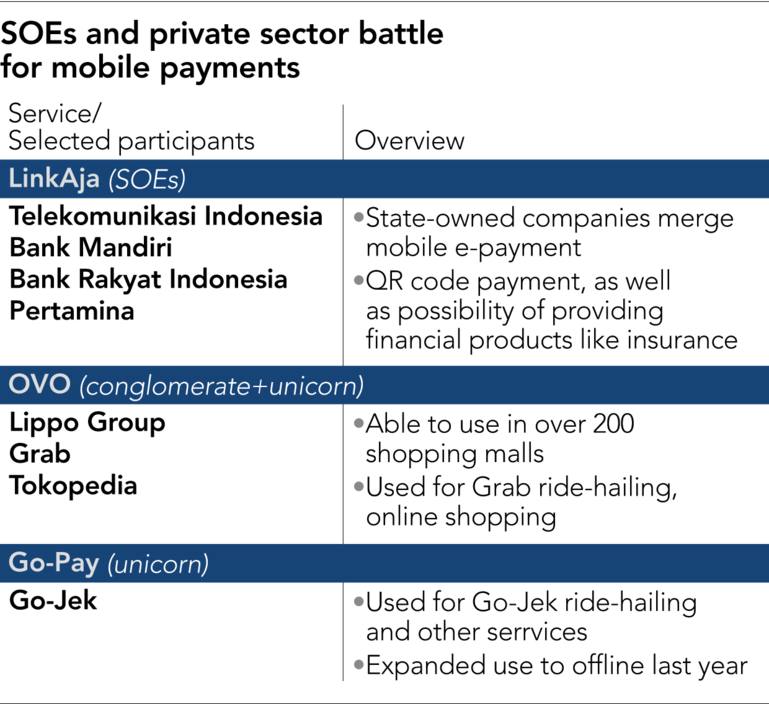 Go-Pay is used for transactions in the various services Go-Jek offers on its platform, from ride hailing and ordering food to calling massage therapists. The payment service expanded to offline stores last year.

Ride transactions also are important to Ovo, which is partly owned by Singapore-based ride-hailing operator Grab. In addition, Ovo has a partnership with Tokopedia, Indonesia's leading e-commerce company.

The new LinkAja service is slated to start in March. Users will be able to make cashless payments through QR codes. The new platform also is expected to let users pay bills such as utilities, and will not require a bank account, with options to top-up balances at places like convenience stores and ATMs.

LinkAja is intended to "strengthen and expand the network so that it can more quickly take market share," said a director at one of the state-owned banks. "We [think] competition with the 'private parties' in the payment sector will be tight." Integrating into one platform and creating a larger network "will add more users in the rural areas."

Indonesian state-owned oil and gas giant Pertamina is also expected to join the alliance. The company has around 7,000 gas stations nationwide, entering areas where bank branches do not exist. Though Pertamina's role remains unclear, the platform could expand its user base if LinkAja can be used at the gas stations. Rural residents potentially could use Pertamina stations to top up their accounts as well.

A recently formed Telkomsel subsidiary, Fintek Karya Nusantara, will oversee the new platform. The telecom group is expected to hold 25% of the venture, with each bank owning a 20% stake, except for Bank Tabungan Negara, which would hold 7%, according to a source familiar with the matter.

A state-run insurance company is set to hold 1% of Fintek Karya Nusantara, with a view to letting users join life insurance plans through the service.

A source said BNI is in discussions with Alipay and WeChat Pay -- mobile payment services run by Chinese internet leaders Alibaba Group Holding and Tencent Holdings -- about potentially allowing the use of those services on LinkAja. But industry insiders are skeptical that LinkAja will pose a significant threat to Go-Jek or Ovo. "I don't think LinkAja can keep up," one insider said. "I doubt they will be able to make decisions with the same speed as private companies. It will also be difficult for state-owned companies to burn cash [for promotions and discounts] on the same level."