TOKYO -- The sharing economy is forcing businesses of all stripes to rethink their strategies. Toyota Motor and General Motors are in the same boat, but their tactics differ markedly.

Toyota, which raced to the head of the pack in green technology, aims to use its manufacturing prowess and artificial intelligence research to do the same in the nascent market for self-driving vehicles. 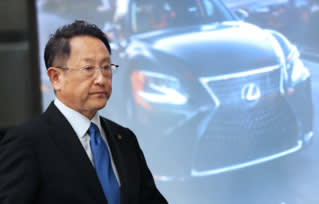 By contrast, while GM is also getting into the autonomous game, it is shifting away from its traditional emphasis on manufacturing to become a provider of mobility services.

On June 4, Toyota President Akio Toyoda drove the automaker's 86 sports car in a rally in Fukui Prefecture, western Japan, before a crowd of some 10,000. The 61-year-old has always insisted that driving ought to be fun, and upon becoming president, he put sports cars back on the agenda -- starting with the 86.

He was on to something: Average monthly sales of the 86 remain 15% above the company's targets.

But Toyoda can only take so much solace from the car's success. Toyota is bracing for revenue and profit declines for the second straight fiscal year. Apart from the sluggish business performance, the rise of the sharing economy has clouded the long-term future for automakers.

As cars spread in the 20th century, automakers sought to produce huge numbers of high-quality vehicles at low cost. Eventually, Toyota came out on top.

But all of that is history. In the 21st century, the combination of smartphones and ride-hailing services has changed the way people look at cars. Many are asking: Why buy one, when an affordable ride is always a few screen taps away?

Worldwide, more than 3 million people use ride-sharing services every day.

This, coupled with the looming spread of self-driving technology, will halve the number of personally owned vehicles by 2030, according to Deloitte Tohmatsu group. 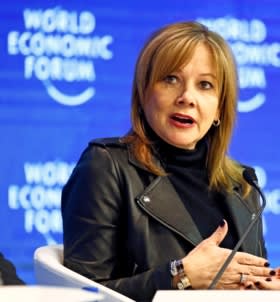 So much for the conventional auto business model, which was built on the assumption that just about everybody aspires to own a car.

Toyoda is counting on his company's team of researchers to craft a new model. Chief among them is Gill Pratt, the head of the Toyota Research Institute -- a unit set up in Silicon Valley. The 55-year-old is a sought-after expert in the field of AI; Google once attempted to recruit him.

The institute has some 190 experts on its payroll -- about 30% more than Toyota initially planned to hire. They include a former Google executive and university professors.

With a five-year budget of $1 billion, it is up to them to solve the riddles of autonomous driving and ride-sharing.

Broadly speaking, GM lost to Toyota in the battle for the top position among automakers, and it even went through bankruptcy during the global financial crisis. But Chairman and CEO Mary Barra is taking the American icon in a whole new direction.

Barra has worked for the company since her late teens. Her father was also a GM veteran. But instead of sticking to the old strategy of trying to sell more cars, she is focused on expanding the scope of vehicle-oriented services.

GM in May withdrew from India, after halting production in Russia. It has also started to downsize its manufacturing operations by outsourcing the production of utility vehicles, such as pickup trucks.

Freeing up funds that would have gone to plants allowed GM to invest in Lyft, a U.S. ride-sharing company.

GM also introduced its own car-sharing service last year. The smartphone-based service, called Maven, has garnered positive reviews for its ease of use and affordable prices. With rates starting at $6 an hour, more than 40,000 users have taken Maven for a spin so far.