Inflation finally catches up to Japan, via Netflix and Apple TOKYO -- Despite mounting concerns of inflation in the rest of the world, consumer prices and wages in Japan have both stubbornly resisted upward pressure for decades.

Still, cracks are starting to emerge as overseas businesses from Netflix to steelmakers shed light on how Japan's deflationary spiral could hurt both its consumers and businesses.

"It's just a bit expensive," one Tokyoite grumbled back in February in response to new monthly subscription costs announced by Netflix.

The video-streaming giant revises its pricing about every two years. Its most recent update increased the standard monthly subscription in Japan by 13% to 1,490 yen ($13.44) and in the U.S. by 8% to $13.99, bringing prices across the world roughly on par.

That decision represented a break from the usual pricing schemes among global companies, which tend to charge Japanese customers less.

Universal pricing around the globe hurts customers based in countries where salaries have stopped growing. Japan is a prime example, with real wages down 9.7% as of last fall from their peak in 1997.

A hint for what could be in store in the future lies in the peculiar readings in industrial material prices. Hot-rolled steel sheet prices, for one, are 10% to 20% more expensive in overseas markets. That was virtually unheard of a decade ago.

"Deliveries are 30-40% shorter than usual," said a steel processor in the Tokyo area. "We aren't able to buy [steel] in sufficient amounts because steelmakers are prioritizing exports."

Hot-rolled steel is fetching about $1,015 a ton in Southeast Asia in the latter half of June. It is natural to prioritize foreign buyers, who will immediately purchase at a higher value, over domestic buyers who tend to haggle down. 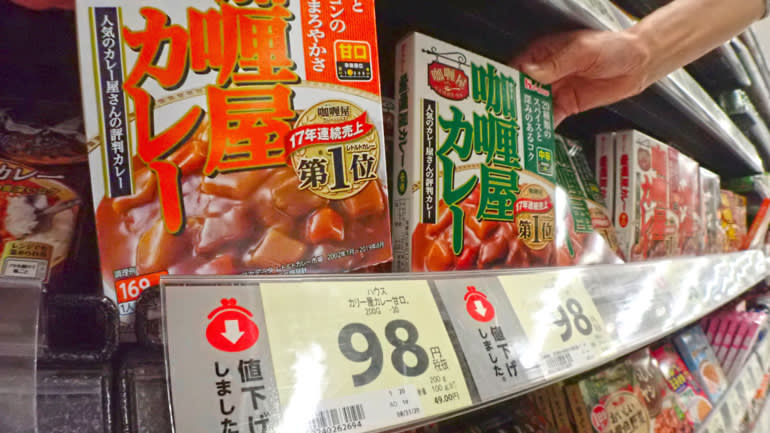 Curry prices were cut at a Tokyo supermarket in September 2020. Japan has been struggling with deflation for decades. (Photo by Makoto Okada)

Fueling the divergence between domestic and international prices is the fact that Japanese corporations are in a poor position to raise end prices on Japanese consumers, who exhibit strong deflationary attitudes.

The corporate goods price index stood at 103.9 points in May, up 4.9% from a year earlier -- the sharpest gain in roughly 13 years.

Yet the consumer price index, excluding fresh foods, edged up only 0.1% last month, marking the first positive year-on-year change in 14 months due to the crude oil rally.

This shows a large discrepancy between corporate prices, which depend on global demand, and consumer prices, which are governed by internal demand. Despite this development, businesses are unable to pass on the extra cost of their products.

Instead, companies are curtailing labor expenses to offset the extra procurement costs. This has shifted the burden to workers, especially non-regular employees.

As a result of that trend in the labor market, consumer spending has struggled to grow and corporate earnings have become sluggish, forming a vicious cycle.

"If the current structure remains in place, it will be difficult to raise wages for the society as a whole," said Rikio Kozu, president of the Japanese Trade Union Confederation, the leading union known as Rengo.

A multinational normally hikes prices on products to match the added value, which then leads to higher wages. Japan's "Galapagos" economy -- where business sectors tend to focus solely on the needs of domestic users -- has so far resisted that calculus. But global inflationary pressures, as exemplified by Netflix, are quietly changing the game.