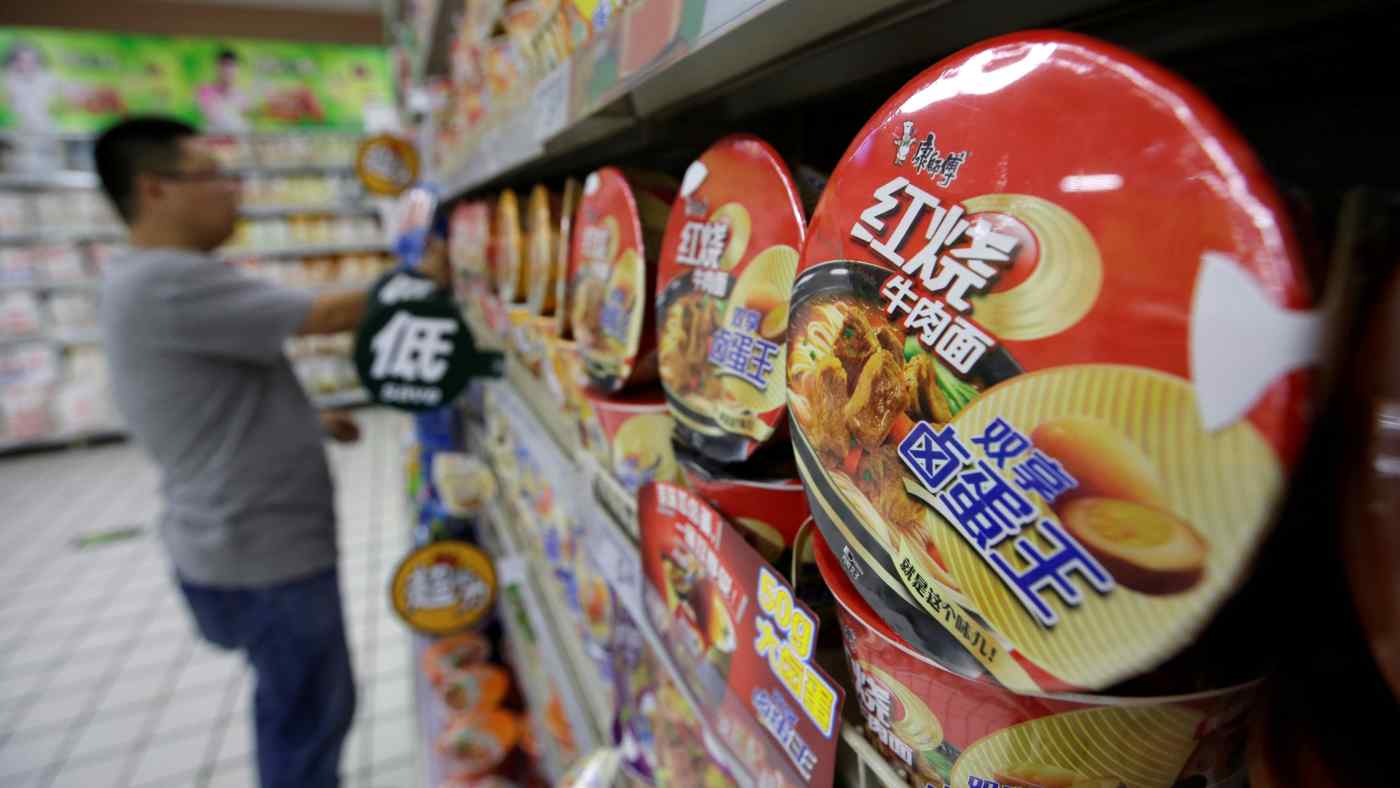 TOKYO -- Sixty years since Japan's Nissin sold its first packet of chicken ramen, instant noodles have become ubiquitous around the world, with more than 100 billion units sold yearly. Now big producers are zeroing in on growing markets like China, India and Brazil in a bid to capture even more hearts and stomachs.

The who's who of the industry gathered for the World Instant Noodles Summit on Aug. 22 and Aug. 23 to discuss global market trends. The event, which comes every two or three years, was held this year in Osaka -- the hallowed ground where Nissin founder Momofuku Ando invented the instant noodle.

"China and India have room for further growth," one participant said at the meeting. Instant noodles are often dismissed as lacking nutrition. But "for demand to recover in Indonesia, that perception must be dispelled," another noted.

About 100.1 billion packets of instant noodles were sold across the world in 2017, marking a 10% increase from 2008, according to the World Instant Noodles Association. While a staggering 80% of sales came from Asia, other markets are growing as well. North America accounted for 5 billion packets, while Central and South America, Middle East and Africa, and Europe accounted for 3 billion each.

Meanwhile, Japan, the birthplace of the instant noodle, is fading from the picture. It consumes 5.7 billion packets a year, only 6% of the worldwide total, and the top four Japanese players control just over 20% of global market share.

Taiwan's Ting Hsin International Group, which owns the Master Kong brand popular in mainland China, is now the world's No. 1 player in instant noodles by sales with a 15% market share, according to Euromonitor International. Nissin Foods Holdings follows with 12%, then Indonesia's Indofood Sukses Makmur with 7%. Japanese players are expanding their overseas operations in hopes of getting back to the top. Nissin opened a cutting-edge factory in the Chinese province of Zhejiang in 2017, which is now operating at full capacity. It also listed its Chinese unit on the Hong Kong exchange at the end of last year.

The company used to sell mainly seafood-flavored products at higher price points in China, but is now putting more effort into pork-based tonkotsu ramen. It launched there in April a new version of Cup Noodles that it developed jointly with a famous ramen shop in Japan.

Taiwanese players lead the pack in tonkotsu instant ramen. But with more foreigners visiting Japan and tasting the real thing, Nissin hopes to take on the competition by highlighting the authenticity of its noodles.

In China, "decision-making and product development will be made more locally to respond more quickly to demand," said Kiyotaka Ando, who heads Nissin's Chinese unit.

Meanwhile, rival Toyo Suisan Kaisha controls nearly 90% of the Mexican market. Its Maruchan brand is so popular there that it has become local Spanish slang for doing things quickly. The company, which also boasts a high market share in the U.S., launched a Brazilian unit in 2017 as part of its strategy to make inroads in other markets in the Americas.

Acecook, which commands more than half the market share in Vietnam, sees Myanmar as its next big destination. It found success in Vietnam through a hot and sour shrimp-broth noodle inspired by local cuisine. It is now working on an even spicier version that better fits tastes in Myanmar. Nissin is also vying for a piece of the Myanmar market, where it is working with a local partner on production.

These new markets present big opportunities for growth, given their rising population and low noodle consumption per capita. People in Myanmar and Brazil eat a quarter as much instant noodles as in Japan. Indians eat them just four times a year, less than a tenth as often as the Japanese. In addition to offering products that are cheap and convenient, companies are striving to cater even more closely to local tastes to win over new consumers.

Japanese producers are not sitting idle at home. Nissin has launched ads on social media and other platforms to reach younger consumers, and is considering a switch to biodegradable plastic packaging for its noodles in the next two to three years. Sanyo Foods, maker of Sapporo Ichiban, is creating new products for more health-conscious seniors, such as a kind of ramen it says has as much fiber as a head of lettuce. But the Japanese market is not expected to grow any further, given its shrinking population, forcing companies to look for new opportunities abroad.