Internet economy to be worth $240bn in Southeast Asia by 2025 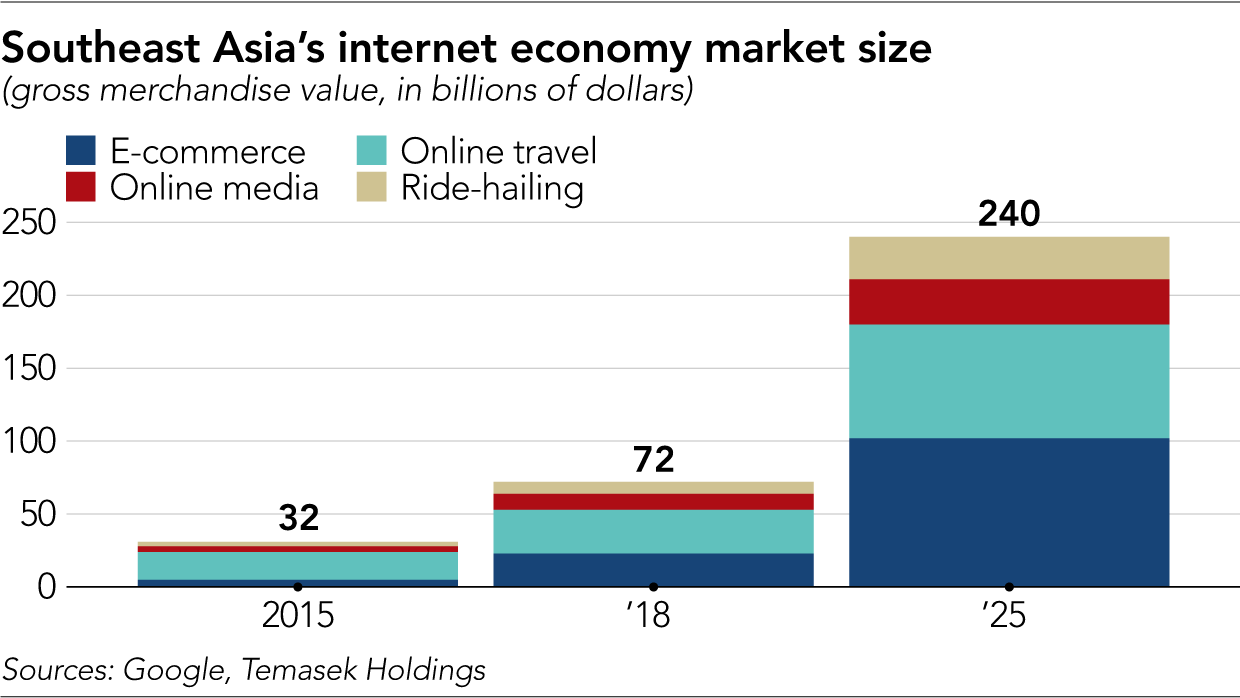 Southeast Asia's internet economy, including e-commerce, online travel and online media, will be worth $240 billion by 2025, according to a study published Monday by Google, and Singapore's Temasek Holdings.

The forecast, which is 20% higher than last year's estimate, reflects the rapid growth of new services such as online vacation rentals, and the appearance of regional startups to meet that demand.

The U.S. tech giant and the sovereign wealth fund have published three reports on the sector, beginning in 2016. The latest survey includes new services such subscription music, video on demand and online food delivery. These new businesses have lifted revenue estimates for the net economy as a whole.

The study forecasts more than threefold growth for the internet sector in Southeast Asia, versus an estimate of $72 billion in 2018. E-commerce will make up the biggest slice of the internet economy by 2025, according to the report, with its gross merchandise value, or GMV, reaching $102 billion that year, up from $23 billion in 2018.

Chinese online leader Alibaba Group Holding is pushing into Southeast Asia with its Singapore-based e-commerce platform Lazada. Sea, another Singapore company, formerly known as Garena, has expanded its Shopee service to other countries in the region. Amazon.com is also active. This intensifying competition will expand e-commerce in the region, the study predicts. A Manila resident watches a movie on a mobile phone. More than 90% of Southeast Asians connect to the internet primarily through their smartphones, according to a Google-Temasek study.   © Reuters

Indonesia has the largest single market. Its internet economy, with the region's largest user base, at 150 million in 2018, is forecast to expand to $100 billion by 2025. Thailand, the second largest, is predicted to be worth $43 billion that year.

Vietnam is expected to be the fastest-growing internet economy, jumping elevenfold to $33 billion by 2025 from $3 billion in 2015. "Amidst one of the lowest penetrations of online travel bookings in the region, the online travel market [in Vietnam] has also huge headroom for growth," the report says.

The study covers Indonesia, Malaysia, the Philippines, Singapore, Thailand and Vietnam, noting that there are more than 350 million internet users in the six countries. "More than 90% of Southeast Asians connect to the internet primarily through their smartphones," it says, and the region is "one of the most mobile-first internet regions globally."