'Izakaya' pubs reach out to tourists as Japanese stay home

Restaurant customs like compulsory appetizers are suddenly being challenged 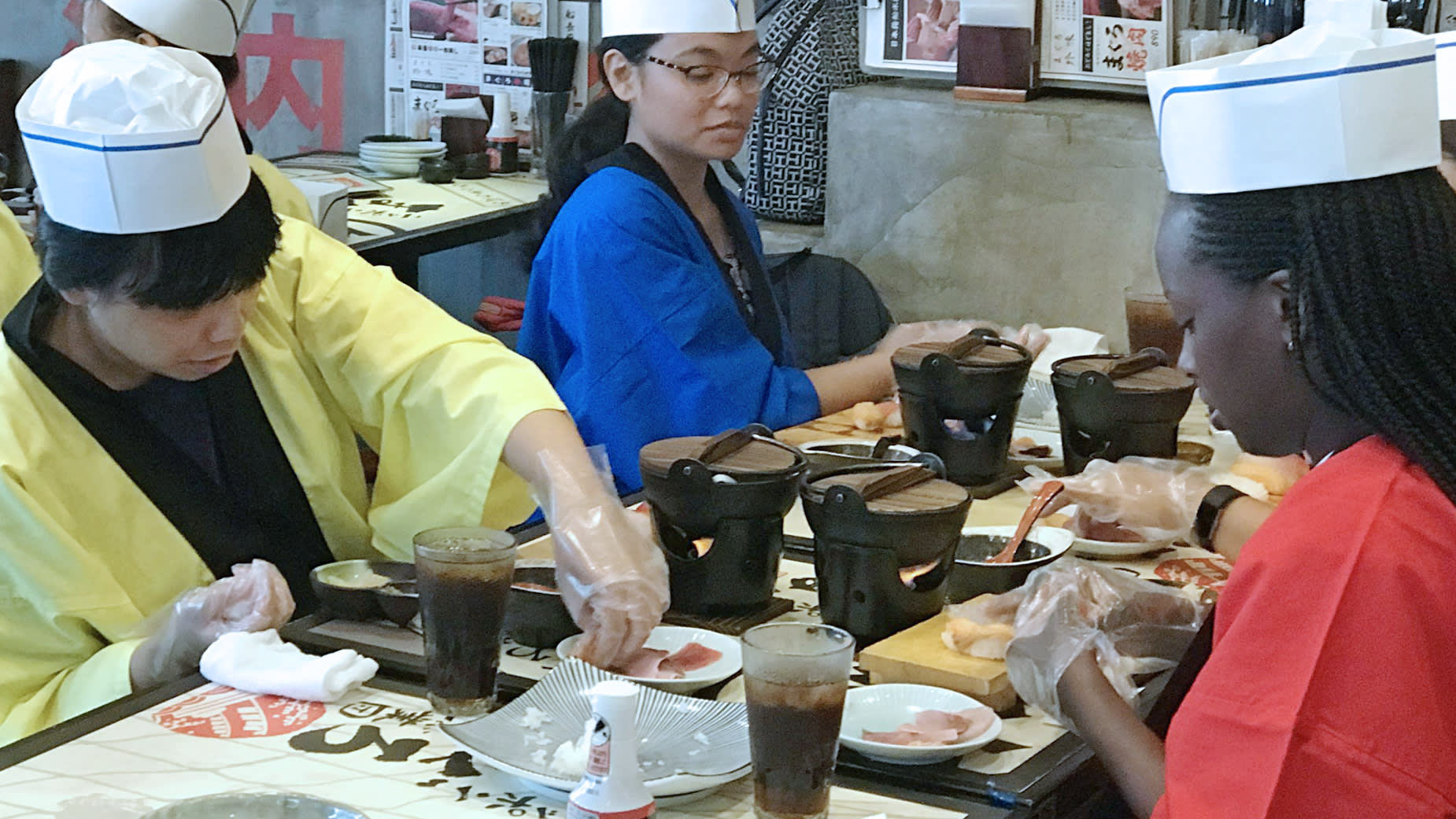 Overseas visitors take a crack at making sushi at the Minato, Tokyo, branch of Nippon Maguro Gyogyoudan, which has found a new daytime use for taverns that are not getting as many nighttime drinkers as they used to.
RYOSUKE EGUCHI, Nikkei staff writerAugust 10, 2018 14:02 JST | Japan
CopyCopied

Food tours for travelers are helping Japan's major izakaya chains as they adjust to the waning popularity of drinking among young Japanese and to a falloff in the number of big group outings.

By bringing in tourists at lunchtime, pub operators are hoping to tap into a new revenue stream being created by the government's tourism drive, which is loosely connected to the 2020 Tokyo Olympics.

It is 11:30 a.m. in the corporate district of Shimbashi, Tokyo. American tourists step off a bus and are quickly funneled up to the fourth floor of an office building, to an izakaya called Nippon Maguro Gyogyoudan. The name translates as the Japan Tuna Fishing Industry Group.

Chefs prepare tuna in front of the visitors, who later try their hand at rolling the fish fillets into nigiri sushi and are also treated to freshly fried tempura.

Tour groups come through the place at least three times a week and daily during the peak spring and autumn seasons.

Major Japanese izakaya chain Watami runs Nippon Maguro Gyogyoudan. It is one of about 130 outlets under the company's various brands, including the well-recognized Watami and Miraizaka chains, which have begun to cater for foreign tour groups.

Watami is appropriating its large urban restaurants, those seating over 100, as lunch spots for tourists, in cooperation with tour operators. For this year, Watami is targeting a 30% annual increase in overseas visitors to 300,000.

To cultivate the tourist market, izakaya companies are also adopting new payment methods. In July, Daisyo began accepting WeChat Pay at 30 of its outlets. It also expanded an Alipay trial, running since February, to 30 stores. WeChat Pay and Alipay are Chinese smartphone applications that use QR codes to help users settle their bills.

Daisyo operates a network of seafood izakaya, where ease of payment is seen as a drawing card for individual and family travelers.

Daisyo aims for tourists to account for 2% of revenue, more than double the current level.

Another izakaya chain, Tsubohachi, will soon line the inside and outside of its eponymous eateries with traditional Japanese paper lanterns. Following a remodel in March, its Asakusa outlet has designated a no-smoking area, something tour groups seem to like. And the company has developed a new menu that caters to overseas visitors, including well-liked dishes such as tempura. Before the remodel, maybe one or two groups would show up at a time. Now the second floor, which has seating for about 60 people, is generally full of customers from abroad.

For izakaya operators, Japan's foreign tourist boom holds the promise of finding lunchtime and early evening customers, when the pubs' regular clients are hunkered down in their offices.

According to BorderlessCity, which manages the tour company-focused restaurant search site Dantame, visitors to Japan part with 1,998 yen ($17.9) at lunch and 3,687 yen in the evening -- lavish spending by Japanese pub standards.

According to the Japan National Tourism Organization, the country hosted 15.89 million overseas visitors during the first six months of this year, an increase of 15.6% from the same period in 2017. Looking ahead to the 2020 Tokyo Olympics, the bureau forecasts rising tourist demand for eating and drinking experiences.

But hurdles remain in front of izakaya operators hoping to tap into this demand. Many Japanese customs catch foreigners off guard, like otoshi, a compulsory appetizer. Customers do not order these dishes, but get served them and have to pay for them.

Japan also lacks services that many non-Japanese customers demand, like halal and substantial vegetarian menus. So the foreign tourism boom, besides bringing new customers into izakaya, is also presenting operators with challenges.