The problem could grow worse as the government tries to attract more cruise passengers to Japan as part of its growth strategy.

Its goal is for 5 million foreign cruise passengers to come ashore in 2020. Each passenger spends 40,000 yen a day when in a port city, according to many estimates. And since many ports of call are far-flung -- away from Japan's major metropolises -- there is hope that these big boats and the big spenders they carry can help revitalize regional economies.

So customs agents will have to deal with the influx, like they did on April 27. That day, four cruise ships entered Yokohama Port at the same time, bringing a 8,000 passengers to Osanbashi Yokohama International Passenger Terminal and two other customs, immigration and quarantine areas. It was the most people Yokohama customs agents had ever had to deal with at one time.

For the day, Yokohama agents handled 20,000 people, including crew members, disembarking cruise ships. "At this rate," a Yokohama Customs official said, "our inspection capacity will soon go beyond its limit."

The Ministry of Land, Infrastructure, Transport and Tourism estimates that Japan welcomed 2.34 million cruise passengers in fiscal 2018 and that they accounted for less than 10% of the total 31.63 million foreign visitors who arrived during the 12 months.

Arrivals from China, where the middle class is rapidly expanding, are way up. Last year, about 80% of cruise arrivals, or 2.02 million, were from China. 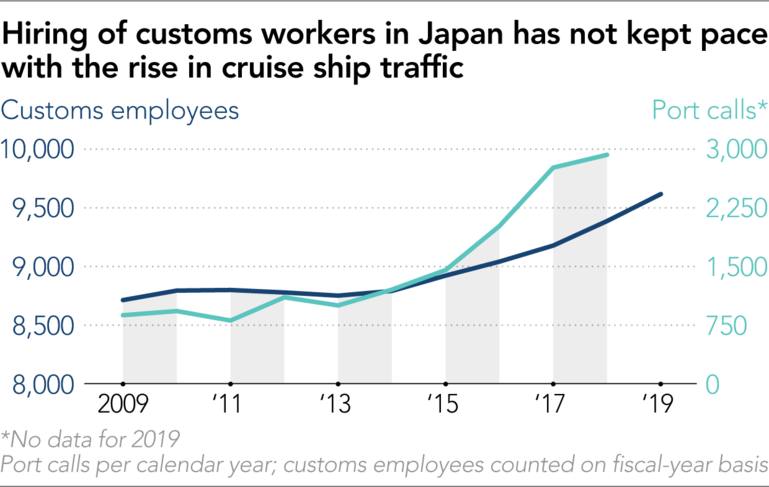 The Japanese government, however, has been slow to ensure customs can handle the swell of tourists arriving by sea. The number of agents for fiscal 2019, which began in April, was padded by 2% from a year earlier, to 9,617. This represents about a 9% hike from five years ago.

Customs is among a few government branches that have been allowed to increase staffing levels. Nevertheless, it has not hired nearly enough agents to keep up with the surge in foreign arrivals.

Customs procedures at seaports have their own set of problems. Cruise ships do not have specified spots to anchor at. And unlike at airports, there is no fixed customs inspection hall.

Each time a cruise ship docks, customs officers scurry to a building that passengers will pass through, toting their own inspection benches, luggage X-ray equipment, metal detectors and other devices. After processing all of the arrivals, inspectors then have to remove the equipment.

If immigration procedures for cruise passengers are perceived to be lax, smugglers could try to exploit the situation. In 2017, agents caught cruise passengers attempting to smuggle about 27 kg of gold bullion worth roughly 120 million yen ($1.1 million), and 7 kg worth of stimulant drugs.

The government is considering new countermeasures. It could make agents' jobs easier by securing passenger information in advance. The airline industry uses a passenger name record (PNR) system that contains more than 30 pieces of information on passengers, like names and the dates on which flights were booked, primarily for security purposes.

The cruise industry has no such system.

The Ministry of Finance has proposed that the World Customs Organization, which is in charge of establishing international rules for customs procedures, set up a PNR-like system for cruise ships. In March, WCO member countries broadly agreed to the proposal. More than 180 countries and regions belong to the WCO, so if the proposal becomes a reality, a global information network on cruise passengers will be established.

The Japanese government, which would like something set up ahead of next summer's Tokyo Olympics, is also mulling its own system to acquire passenger information from cruise lines. It also plans to install passport-scanning devices body X-ray scanners at ports.