Japan Inc lukewarm about hiring foreigners from class of 2019

Despite labor crunch, survey finds most companies not ready for office diversity TOKYO -- Efforts by the Japanese government to encourage more foreign hires amid an aging and dwindling workforce have failed to strike a chord with businesses, a recent survey has suggested.

The survey, by job-information company Mynavi, found that less than 12% of respondents had offered jobs to foreign students slated to graduate from Japanese colleges next spring.

Mynavi sent a questionnaire to 8,000 companies that had previously hired foreign graduates. A total of 3,013 companies -- including 450 that are listed -- responded to the monthlong survey, which ended on Oct. 3

The most common reasons given for not hiring foreigners indicated that much of Japan Inc. is simply not prepared to take on foreign staff. More obvious reasons, such as the increased administrative tasks that come with foreign hires and lack of Japanese proficiency, were not cited as often.

Yuki Kobayashi of Mynavi's research and marketing division said a significant number of companies are interested in hiring foreign grads for their language skills. "But many hiring executives appear to feel that this is difficult after taking into account their company's work environment," Kobayashi said.

"Part of this may stem from Japanese employees lacking the foreign language skills needed to communicate with non-Japanese colleagues," she added.

Asked whether they had already hired foreign students due to graduate next spring, 81.3% of respondents answered no, while just 11.7% said they have or plan to hire some. Even among listed companies -- likely destinations for foreign hires -- those that have hired, or plan to hire, totaled only 28.1%.

In a multiple-choice query as to why they do not want to hire the foreigners, 43.8% of respondents indicated that current staff are not ready for non-Japanese colleagues, followed by 43.2% who said they have yet to create a work environment where foreigners can thrive, and 19.8% who believed that foreigners would not stay at the company long. Manufacturers were the most active employers of the grads, with 15.6% saying they had experience hiring them. This was followed by companies in retail and software-telecommunications, underscoring the severity of the labor shortage in these industries.

Only 10.7% of respondents plan to hire foreign students graduating in 2020, while 60.4% said they will not. Again, manufacturers, retailers and software-telecommunications companies showed the strongest interest.

One company that is taking on foreign grads is Fujitsu, which started recruiting them in 2005. Now, 10% of annual new graduate hires are foreigners. Of those hired in the current fiscal year, more than 90% are Asians.

For Fujitsu, one of the benefits of hiring foreign grads is their specialized knowledge. But the company says it is looking for more than that. "We want foreign [graduates] -- especially those who have studied in Japan -- to become a catalyst for change within the company," said a spokesperson. 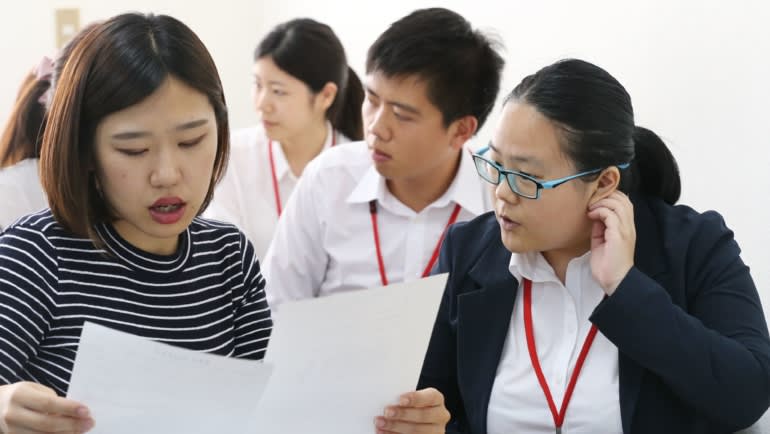 Foreign students learn how to write job applications at a school in Tokyo.

Fujitsu provides language training and other specialized support for new hires, including flexible work styles. But this kind of support is usually available only at large corporations. "Many Japanese don't speak English, so they have to make sure [foreign employees] know the language," said Kazuhisa Sumino, representative of Kigyo Koryu Center, a Tokyo-based cooperative that matches foreign workers with small businesses.

"Companies have not decided on how they can utilize global human resources," a Mynavi official adds. They do not have clear career paths or purposes for foreign employees, making themselves unattractive as employers.

According to Kaori Matsui, career support manager at Ritsumeikan Asia Pacific University, the majority of Japanese companies do not have hiring targets for foreign graduates. The need for diverse viewpoints is recognized by many companies, but it has not translated into actually hiring people with different backgrounds.