Big jump seen in acquisitions worth over $1bn

TOKYO -- Japanese companies are accelerating their push overseas in a bid to drive growth, with outbound mergers and acquisitions last year reaching a record high of 777 deals -- an increase of nearly 16% from the year before.

Takeda Pharmaceutical's takeover of Irish drugmaker Shire helped to drive the surge in deal value. At nearly 7 trillion yen, it was the largest ever overseas acquisition by a Japanese company.

Excluding Takeda's deal, the value of Japanese outbound M&As amounted to 12 trillion yen, 60% more than in 2017, maintaining a solid increase.

Japanese M&A has surged in recent years as companies seek to escape a home market where the aging and shrinking population is making it difficult to generate growth. A dwindling market and low interest rates have also hit banks' profits, encouraging them to look for deals to spur earnings growth. Outbound M&A with a transaction value of over 100 billion yen jumped 70% to reach 32 deals, setting a record high. The big deals mainly involved companies within the manufacturing industry.

Japanese companies are putting their money mostly into North America and Asia. Among the 777 outbound deals, nearly 36% were acquisition of North American companies, while Asian enterprises took up 33%. Europe was about 23%. Within Asia, companies from Singapore as well as China, including Hong Kong, were the most targeted.

Yuko Yoshitomi, president of Recofdata, said "big companies aim to grow through big acquisitions because it will enable their market share to double or triple."

Takeda's purchase, for example, made it one of the world's top 10 drugmakers, with an expected annual sales of more than 3 trillion yen.

The M&A spree is not only due to Japanese companies' need to go global, but also to the fact that they have lots of cash. Corporate Japan has seen an increase in its cash holdings ever since the financial crisis that hit in the fall of 2008, which prompted companies to hoard resources for fear of another economic slowdown. 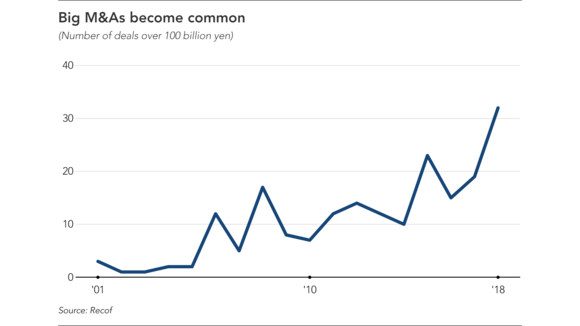 In fiscal 2017, cash reserves of companies listed in the Tokyo Stock Price Index, or Topix, excluding financials, reached 111 trillion yen. The number continues to grow. With so much cash on hand, Goldman Sachs Securities estimates that the total shareholder return (share buybacks and dividends) for Japanese companies will increase 15% year on year to reach 24.6 trillion yen in fiscal 2019.

"More companies are getting used to the process of M&A," Yoshitomi said, adding that companies have gained "the know-how needed for big deals, thus creating a cycle which produces more and more large-scale takeovers."

Intralinks, which operates a data sharing platform, predicts that Asia-Pacific M&A activity during the first three months of 2019 will increase 14% from a year earlier, with Japan acting as a main driver.

On the other hand, rising geopolitical risks are posing a threat to the M&A market.

According to a biannual survey by consultancy Ernst & Young that queries over 2,600 business executives across 45 countries, 53% of Japanese respondents consider regulation and political uncertainty the biggest potential risks to M&A activities within the next year. The survey also shows that only 50% were planning a takeover within the next year, a drastic drop from the previous survey which cited 73%.

With uncertainties in the global economy, like the relationship between Beijing and Washington, as well as the implications of a no-deal Brexit, corporate Japan may become more hesitant to tap into its funds this year.