TOKYO -- The value of goodwill held by Japanese companies is soaring, but remains at comparatively low levels by global standards, making it easier for them to look overseas for growth through mergers and acquisitions than it is for their international peers.

The total value of goodwill, an intangible asset that results from one company buys another for a premium price, has grown 2.3-fold in the past 10 years as a result of an increase in the number of large-scale acquisitions.

But their total value as a percentage of net assets stands at only 6%, compared with an average of between 40% and 50% in the U.S. and Europe, where companies do not amortize goodwill on a regular basis.

A high percentage of goodwill as part of net assets entails a higher risk of an acquiring company suffering financially if the target company's earnings deteriorate.

The low percentage seen in Japan means that Japanese businesses have less to worry about when acquiring companies overseas. 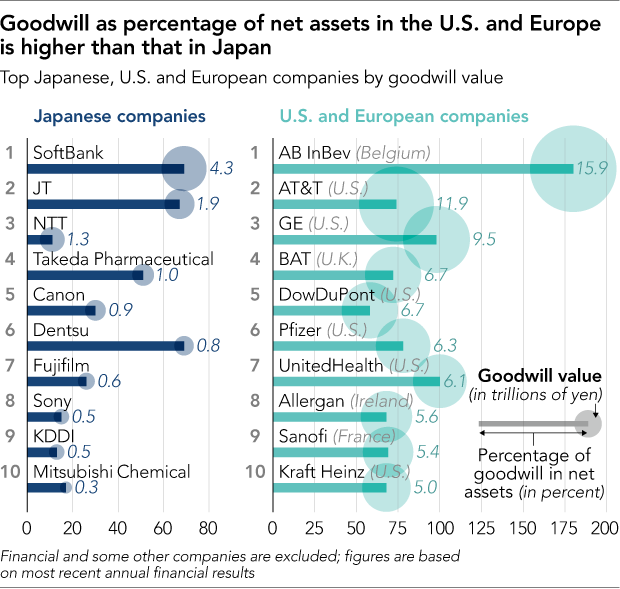 Unlike the International Financial Reporting Standards, Japanese accounting rules require companies to amortize goodwill equally on an annual basis and complete the process within 20 years.

Nikkei conducted a survey of about 3,500 listed Japanese companies that had closed their books by March, excluding financial companies and certain others.

The figure had hovered around the 10 trillion yen mark until fiscal 2010, but has been on an upward trend since fiscal 2011. 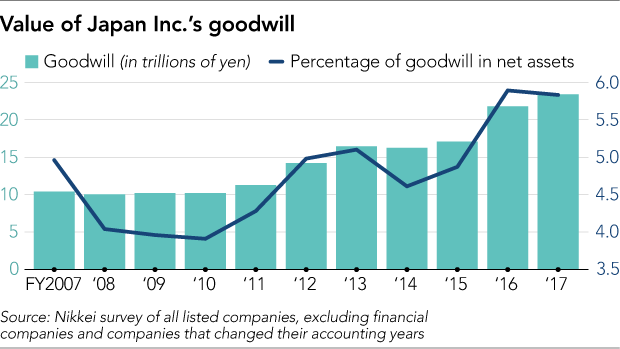 Recently, the trend has grown steeper as more and more companies have sought growth beyond their mature home market by buying foreign players.

SoftBank Group is Japan's biggest listed company in terms of outstanding goodwill. It acquired U.S. mobile operator Sprint for $21.6 billion in 2013 and British chip designer Arm Holdings for 24 billion pounds ($31 billion) in 2016. The group's goodwill is now worth 4.3 trillion yen.

Japan Tobacco, the second largest, now has goodwill worth 1.9 trillion yen after a series of acquisitions, including the purchase of British peer Gallaher.

The rise in the total value of goodwill is also partly due to higher global stock prices and more competition over prime acquisition targets. Most deals involve an "acquisition premium" on top of the target company's stock price. Toshiba, for example, posted a huge loss when it booked a goodwill impairment related to U.S. nuclear power company Westinghouse Electric, which it had acquired in 2006.

In general, the average size of acquisition value increases in line with the buoyant stock market and intensifying bidding wars.

However, the growing value of goodwill held by corporate Japan does not appear to pose a threat to company finances.

In fact, as a percentage of net assets, the value of goodwill at listed Japanese companies stands at only 6%, and the figure has increased by just 1 percentage point in the past 10 years.

Meanwhile, U.S. and European companies are increasing their goodwill at a faster pace than their Japanese counterparts.

Belgium-based Anheuser-Busch InBev, the world's largest beer company, and British American Tobacco have been engaged in large-scale acquisitions of overseas competitors to broaden their brand lineups. U.S. chemical giant DowDuPont has also seen its goodwill expand as a result of its mergers and acquisitions strategy.