Japan Inc. takes another crack at the US restaurant market

Yoshinoya and other fast-food purveyors have a new secret sauce: American execs 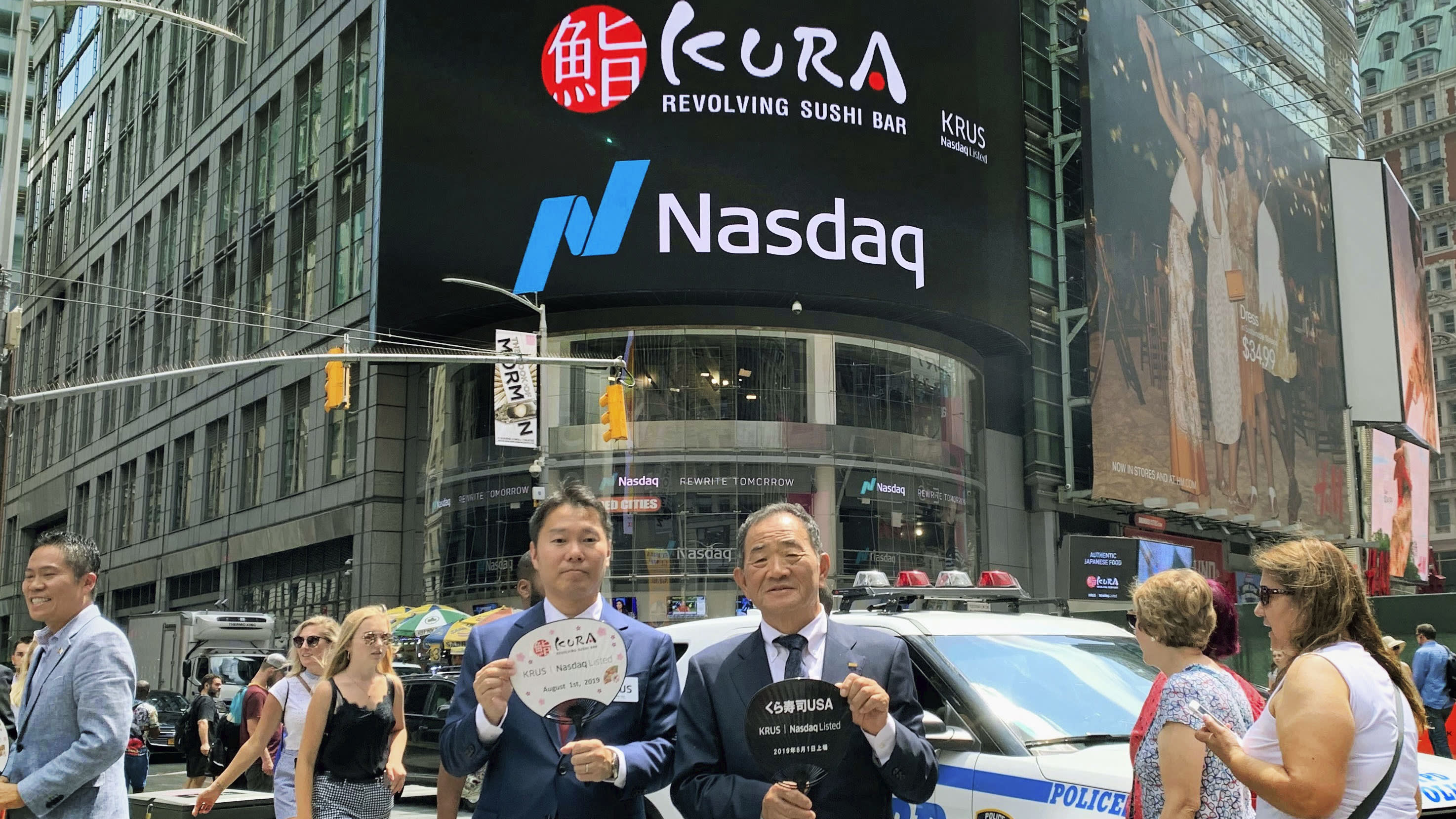 Kunihiko Tanaka, center right, president of Japanese conveyor belt sushi chain Kura Sushi, listed the company's American unit on Nasdaq so that he will be able to dangle stock options and lure executive talent to the U.S. subsidiary.   © Kyodo

TOKYO -- Japanese restaurant chains are trying out a new ingredient in their latest attempt to expand in the U.S., but it is no ordinary ingredient -- it is business-related: American consultants.

Yoshinoya Holdings, famous in Japan for its bowls of seasoned beef on rice, invited a former executive of a U.S. restaurant company to head its U.S. unit and overhaul its menu and store designs. The result is Yoshinoya Japanese Kitchen, which adds bowls of tilapia, "enhanced" vegetable side dishes and a brown rice option to the menu.

Yoshinoya was among the first Japanese restaurant chains to take the leap to the U.S., having done so in 1975. It operates about 100 stores in California and other states, but new openings have slowed over the past few years.

"The U.S. market," Yoshinoya President Yasutaka Kawamura said, "is definitely attractive to us when we think of room for growth." 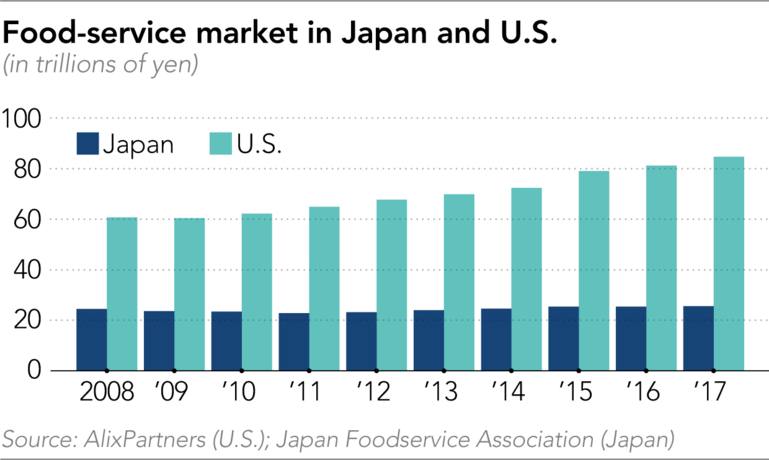 The numbers show why. The U.S. restaurant market was worth about $800 billion in 2017, nearly 40% more than a decade earlier, according to business consultancy AlixPartners. The Japanese market grew 4.8% over the same period, to about 25 trillion yen ($231 billion).

What's more, the U.S. population continues to grow, and millennials, those born in the early 1980s to the early 2000s, are just as likely to eat out as to dine in. They also tend to prefer healthier fare, which makes them an attractive target for Japanese food companies that can tout their country's lean cuisine.

One problem has been that opening a store in the U.S. is a complex procedure that often takes a year to complete. The 50 states have their own regulations, and it is difficult to gather information on properties. Japanese restaurant companies have thus struggled to open new locations and achieve economies of scale.

Kyotaru, a chain of sushi joints that in the 1980s set out to expand into the U.S., was forced to file for rehabilitation under the Corporate Reorganization Act in 1997 as a result of excessive real estate and overseas investments.

Zensho Holdings in 2006 bought Catalina Restaurant Group, operator of Coco's restaurants in the U.S. But the business slumped, and Zensho was forced to sell the group in 2015.

Pepper Food Service, which began opening eateries in New York in 2017, was forced to close seven, or about 60%, of its Ikinari Steak restaurants there this past February.

Still, America remains a promised land for Japanese restaurant companies mired in a decelerating home market and itching to seize overseas growth opportunities. Many of these operators first sought their overseas fortunes in the rest of Asia. But this brought a new set of challenges. For one thing, AlixPartners Director Takashi Ito points out, most Asian markets are relatively small compared to that of the U.S.

And recently Japanese restaurateurs who ventured west have discovered that these relatively small markets have become saturated with eateries.

Thus, crossing the Pacific has become all the more enticing.

Udon restaurateur Toridoll Holdings believes it has found its golden meal ticket in Hargett Hunter Capital Management, a North Carolina-based private equity company focused exclusively on the hospitality industry. The investment company has bought a stake in Toridoll's Marugame Udon USA through a fund it had established. It will also dispatch its directors to Toridoll's U.S. unit. 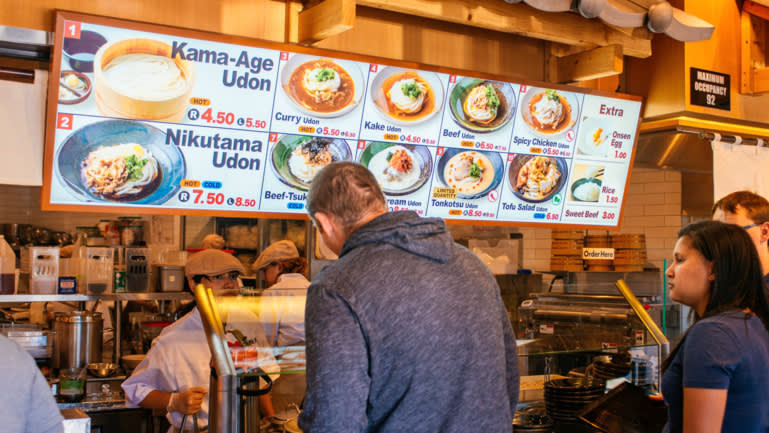 Toridoll is confident about expanding its U.S. chain of Japanese noodle restaurants with the help of an American private equity company.

Toridoll, which has taken a stake in its partner, will also accept Hargett Hunter consultants to advise it on location development and other matters as it expands into Texas and other states.

Marugame Udon USA runs eight stores, most of them on the West Coast, with plans to be operating 160 by 2025.

Kura Sushi has already taken its U.S. unit public. Kura Sushi USA in August was listed on Nasdaq "with the aim of using stock options to lure executives," said President Kunihiko Tanaka. Kura Sushi operates 23 shops in California and other states, with plans to increase the number to 40 by fiscal 2023. The eventual goal is to have 300 eateries in the U.S.

Kura Sushi focuses on the U.S. mainland, where rivals like Sushiro Global Holdings and Genki Sushi do not have a major presence.

In a survey of Japanese restaurant operators Nikkei conducted in March and April, 35 companies said they either had plans to enter or were seeking opportunities in overseas markets. Of these, nearly half said they were targeting the U.S., though a bigger percentage said they are after Vietnam.