The changes brought to Japan by the spread of the coronavirus have allowed Akiko Saga to give in to an irresistible temptation of becoming a cat owner. (Photo by Makoto Okada)
HIROYUKI KOBAYASHI and SHUICHI ABE, Nikkei staff writersOctober 18, 2020 12:00 JST | Japan
CopyCopied

TOKYO -- In spring, as the spread of the coronavirus began to gain ground in Japan, Tokyo resident Eriko Teraoka suddenly began living a brand-new lifestyle. Her company had told her to work from home, and her 5- and 2-year-old daughters' day care center closed.

The girls quickly became glued to their tablets and YouTube videos, and Teraoka decided she needed to remedy the situation. On her elder daughter's birthday, Teraoka took the girls to a pet store and let them pick out a dog. They now take the pooch out for a walk every day to make up for some of the physical activity the pandemic took away from them.

Teraoka's plight and how she turned it into a positive is hardly unique in Japan. In fact, a lot of pet stores have become beneficiaries of a new feel-good economy that is taking shape as the virus wreaks havoc with usual buying patterns and even with once set-in-stone lifestyles. So are bike shops, makers of high-end beauty gadgets and purveyors of gourmet popcorn.

Masako Saga, 41, is among the first-timers. Nikkei Asia recently dropped in on her at her Tokyo, Chiyoda Ward, home, where she was playing with Mugitaro and Ginnosuke, two Munchkin cats.

She paid 600,000 yen ($5,690) for the cats in July. She also spent tens of thousands of yen on a toilet and carry cases for the Munchkins as well as on a cat tower matching the interior of her home.

Living alone, Saga had hesitated to keep a cat for fear of being unable to take good care of it. But as she now works from home most of the week, an irresistible temptation prompted her to make the splurge.

Robots are also becoming popular pets. Groove X, a Tokyo-based startup, can't keep up with orders for its Lovot home-use robot. The waiting period to buy one is three months, up from one-and-a-half months about four weeks ago.

Lovot is priced at about 300,000 yen and comes with a monthly usage fee. President Kaname Hayashi believes Groove X's customers "are probably buying the robot for therapeutic reasons as they spend more time at home." 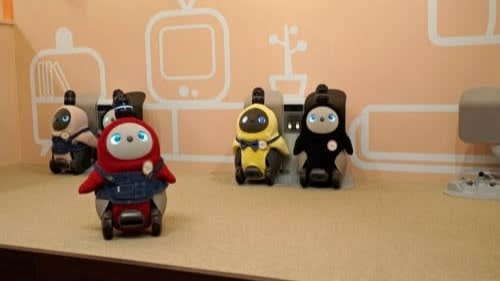 A Lovot cafe in Kawasaki, Kanagawa Prefecture. Lovot robots are so popular that there is a three-month waiting period to buy one.

Half a year has passed since Japan's government declared a state of emergency in an attempt to halt the spread of the coronavirus. The decree was lifted two months later, but not before corporate executives became convinced that their employees are just as productive working from home as in the office.

And with the pandemic still hopscotching around the world, many Japanese have altered their lives, refraining from unnecessary train rides and learning how to do at home what they used to do at salons and in movie theaters.

Some of the shifts in consumer behavior need little explanation.

Sales of bath additives, which create pleasant aromas, make the skin feel soft and help people relax, are growing. In August, they were up 19% from a year earlier, according to marketing research company Intage.

"Purchases of goods that offer opportunities to unwind have increased," said a representative of Kao, Japan's largest maker of skin care and beauty products.

All the hand washing people are now doing -- and all the looking in the mirror this entails -- has convinced many consumers to invest in gadgets that promise to make them look younger, or perhaps more trim.

This demand is also being driven by clients holding off on visits to their aestheticians. Ya-Man, a leading maker of beauty gear and cosmetics, logged 8.7 billion yen in consolidated sales in the May-July period, up 60% from a year earlier and a new high for the three months. Buyers include a considerable number of men who have gained weight by staying home and missing out on their morning and evening stair-climbing rituals at train stations.

Stay-at-homes are investing in "creature comforts" as well.

A Tokyo resident in his 30s had his zen disturbed by something he himself allowed into his home. "Small insects," he said, "often enter my room because I'm opening the window more frequently than I used to."

He apparently is not the only one on the Japanese archipelago experiencing this nuisance; the market for insect repellents grew 20% year-on-year in the first eight months of 2020, according to insecticide maker Earth. The boom "reflects an increase in mosquitoes, midge flies and other small insects entering houses as people become more aware of the need for ventilation," said Yuichi Watanabe, a senior brand manager at Earth.

Before the pandemic, people would scurry for insect repellent only after bugs appeared, with sales surging every summer.

But this year the spike came before the hot and humid months as people stuck in their homes wanted to make sure cockroaches and other pests did not make their annual sorties into kitchens and other rooms.

And with many inhabitants remaining mindful of good hygiene -- the population is trying to keep a virus at bay, after all -- more consumers are gaining an appreciation for household cleaners. Sales of Kao's Kitchen Haiter bleach increased 40% on the year in the February-August period. While the product is usually used to sterilize or bleach kitchen equipment, it is increasingly being adapted to sanitize doorknobs and other surfaces that get heavy finger traffic, a Kao official said.

Kao also sold 34% more dust-absorption wet sheets for its Quickle Wiper in the February-August period. And the broomlike tool itself experienced a sales jump of 57% in August.

Likewise, sales of antifungal agents in August climbed 17% on the year. Demand for tidying-up services is gaining as well. Orders at ReNet Japan Group, a startup specializing in recycling and reselling personal computers and small home appliances, trebled in May from a year earlier. In September, orders doubled year-on-year. The upturn comes as work-from-homers get rid of old PCs and disused gadgets to open more space in their abodes-cum-offices.

The new normal has also given rise to niche markets.

"I enjoy watching movies and dramas on Netflix together with friends as if we were together at home," a woman in her 20s said. Access to Netflix's stream-sharing service, which enables people to watch movies and shows together despite being in separate locations, has sharply increased over the past six months.

This new combination of home theater and virtual party atmosphere is bringing back an old movie theater staple, popcorn.

Japan Popcorn, a producer of high-end kernels under the Hill Valley brand, said the number of people making online purchases has soared 5.4 times this year.

Another trend: People have grown reluctant to go to the hospital. Several solutions for patients needing care have surfaced. In one example, a subsidiary of Halmek Holdings, which publishes magazines for seniors, sells a simple health test kit. The Ouchi de Doc, or Checkup at Home, kit helps users collect and package a few drops of their blood and urine. The samples are then mailed to the company so diagnoses can be made. The number of people sending samples has more than doubled since April.

The subsidiary is having trouble keeping up with orders.

Other people are avoiding mass transit systems for fear of catching the virus. Many have turned to bicycles. A 33-year-old Tokyo woman who has made this trade notes two benefits. "I can avoid crowds," she said, "and make up for a lack of exercise."

Bike stores are dealing with their own avalanche of orders. "We have to wait for six months or so to receive deliveries of some popular models due to supply shortages at manufacturers," said Akihiro Takaoka, of RX Bike, a shop in Tokyo's Meguro Ward. The Asahi chain of bike boutiques chalked up a 12.1% increase in same-store sales in the March-August period. But smaller shops have run out of stock and are unable to capitalize on all the demand. "Sales in September plunged 70% from a year earlier," lamented one Tokyo bike shop proprietor.

Although more than four months have passed since Japan's state of emergency was lifted, people are not out and about as much as they were before the pandemic. On Oct. 5, foot traffic at Tokyo's once-furiously busy Shinjuku train station for the hour starting at 3 p.m. was 31% of the average workday traffic for last October; at nearby Harajuku station, the corresponding figure was 33.4%, according to a survey by Agoop, a SoftBank subsidiary and provider of location data.

These foot traffic figures show that more than altering behavior and lifestyles, the virus is slowing the economy. At companies with five or more employees, overtime and other extra hours dropped 16% in July, according to a monthly survey by the Ministry of Health, Labor and Welfare.

Government handouts have proved to be an effective, though temporary, Band-Aid. Point-of-sale retail data compiled by the Ministry of Economy, Trade and Industry shows a 33% year-on-year increase in sales of home appliances in June, thanks in part to a special pandemic relief payment of 100,000 yen to each Japan resident. That spurt, however, slowed to 4% in August.

Drugstore sales also remain in the doldrums, with cosmetics sales dropping off 9% year-on-year despite all the extra time people are spending in front of the bathroom mirror.

In contrast, sales of food at supermarkets expanded 6% in August while do-it-yourself stores posted a 12% sales increase for detergents, insecticides and similar products.

These consumption patterns -- purchases of high-end popcorn, bath salts and other therapeutic promises -- are expected to continue until a vaccine is distributed and people have been inoculated against the virus. Until then, success in the consumer goods market will go to companies that help their customers feel good in their own homes.