Thai incentives for local production draw in Toyota and Honda BANGKOK -- Japanese automakers are moving to extend their iron grip on the Southeast Asian market into electric vehicles, starting with plans to build plug-in and hybrid offerings in Thailand.

The Thai government has offered generous tax incentives to automakers producing plug-in hybrids and electrics in the country for applications submitted by the end of 2018. This has led a flurry of companies to flesh out plans.

As the region grows wealthier, electrics are turning into a status symbol. Big Japanese names including Toyota Motor and Honda Motor are eager to tap this growing demand in one of their most important markets, while Thailand aims to become a production hub for environmentally friendly vehicles as it did with pickup trucks.

Toyota Motor Thailand will begin local production of plug-in hybrids in the coming years, to be followed by EVs, local media report. It already makes conventional hybrids in the country, selling about 13,000 units here in 2018.

As its first step into other eco-friendly cars, it will start assembling batteries in Chachoengsao Province this May. Plans are to initially import most of the components and gradually shift to more locally sourced parts.

Nissan Motor also plans to start producing batteries in Thailand. Mitsubishi Motors "will start by assembly plug-in hybrids and aims to expand into EVs at the right time," an executive said, while Mazda Motor is expected to start local production of hybrids by year-end.

Thailand wants a repeat of its success with pickup trucks, for which it became a global production base thanks to a favorable excise tax. It launched a strategy to promote the production of low-emissions vehicles in 2007. It is now wooing EV and hybrid makers through an incentive package that includes exemptions from corporate taxes and import duties on production machinery.

The automakers' plans are nonbinding. They have three years after the government approves them to make a final decision on whether and what models to make in Thailand, based on demand in the region, supply chains, and the number of charging stations available to the public. They could still make dramatic changes to start dates and production volumes. 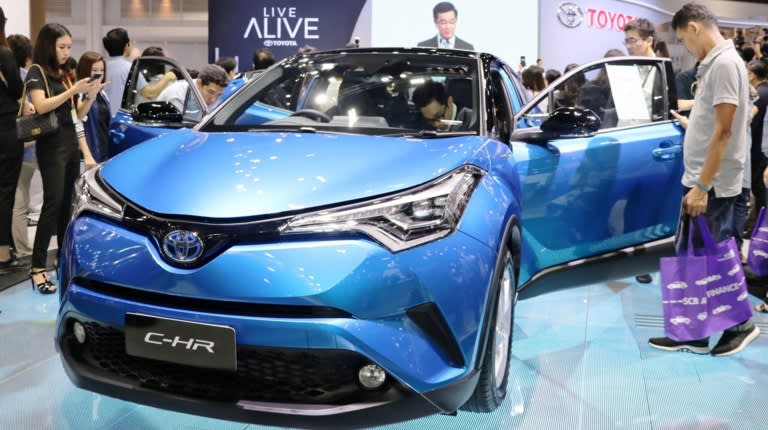 Electric cars are still somewhat of a novelty in Southeast Asia. Even in Thailand, considered one of the region's more mature markets, EVs have a share of only 2% or so. But demand is seen rising quickly. About 37% of Southeast Asian consumers said they would "certainly consider" the option for their next new-car purchase, according to a 2018 study by Frost & Sullivan commissioned by Nissan.

Of the 3.57 million new autos sold across Thailand, Indonesia, Malaysia, Vietnam, Philippines and Singapore in 2018, 3 million came from Japanese or Japanese-backed brands -- an 80%-plus share. The region is now a critical avenue for growth as other big markets such as the U.S. and Europe slow.

Other companies are also angling for a piece of that pie, however. Vietnamese conglomerate Vingroup is launching an electric vehicle in September with the backing of about 20 European companies, including BMW. The company released three gasoline-engine models in June, and the Vietnamese government has high hopes for the homegrown business.

BMW and German compatriot Mercedes-Benz both began making plug-in hybrids in Thailand around 2016, together selling just under 10,000 units a year here. And Chinese automakers are looking to take their EVs into new markets.

Some are even crossing industry lines. Dyson, a household name in vacuum cleaners, said earlier this year that it would move its headquarters from the U.K. to Singapore in the coming months. It aims to build the EVs it is developing in the Southeast Asian country.

New services like ride-hailing are also making ripples in the broader automotive sector. Toyota has invested in Grab, Southeast Asia's largest ride-hailing app operator, as part of its inroads into these fields.

"In order for Japanese automakers to maintain their edge in this region, they need to increase the prevalence of electric vehicles in a strategic manner and set industry standards," said Hajime Yamamoto, senior consultant at the Nomura Research Institute Thailand.