TOKYO -- The number of corporate officers in Japan earning at least 100 million yen ($930,000) annually fell for the first time in eight years in fiscal 2019 as the coronavirus pandemic eroded performance-based compensation packages.

The ranks shrank by about 100 from the previous year's record high to 485 corporate officers at 237 companies, according to Tokyo Shoko Research, which looked at listed companies that had submitted earnings statements by Wednesday. The total last declined in fiscal 2011, in the wake of the March 2011 earthquake, tsunami and nuclear disaster.

The decline, as well as the preceding rise, is rooted in the growing popularity of Western-style incentive-based remuneration to attract global management talent. While such frameworks boosted pay in past years, they worked against many executives in fiscal 2019 as net profit at listed companies plunged 31% and the Nikkei Stock Average sank more than 10% over the year through March.

Those who did make the list often earned more than in the previous year. Forty-eight received at least 300 million yen, suggesting that the downturn has not done much harm to pay rates at the top end. Many of the highest-compensated executives hailed from outside Japan, including Toyota Motor's Didier Leroy and Nigel Frudd of Sompo Holdings, reflecting the scramble to retain foreign talent. 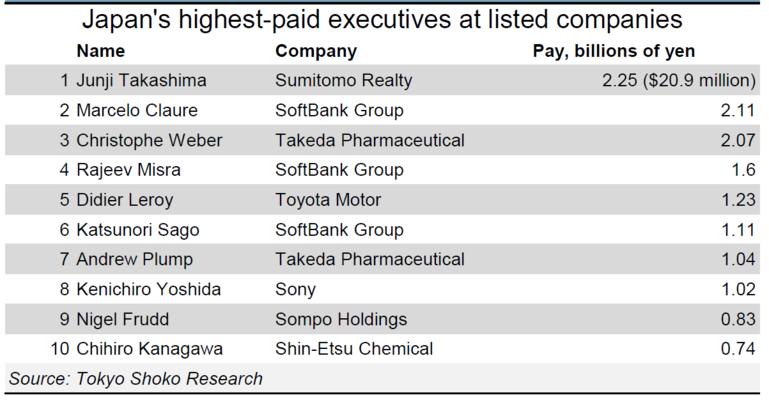 SoftBank Group had three board members in the top 10, including Chief Operating Officer Marcelo Claure, who ranked second with 2.11 billion yen. The technology conglomerate reported a net loss of well over 900 billion yen for fiscal 2019.

CEO Masayoshi Son responded to shareholder questions at June's annual general meeting by taking the blame for insisting on investing heavily in WeWork, the main culprit behind the losses. "I should be getting the biggest pay cut," he said.

At Takeda Pharmaceutical, which has been criticized by shareholders for high executive pay, CEO Christophe Weber's compensation grew 18% to 2.07 billion yen in a year in which the company's net profit plunged roughly 70%. Takeda introduced in April a system allowing for compensation to be clawed back in response to such problems as misconduct.

At the top of the list was Junji Takashima, who served as chairman of Sumitomo Realty & Development until his death in September. Sumitomo Realty pools half of its directors' annual pay for future retirement benefits, and Takashima's share was paid out on his death.

With earnings and stock prices languishing amid the pandemic, companies face the challenge of designing compensation systems that can both attract talent with crucial leadership skills and satisfy potential outside critics.

"It's important to have an objective and transparent process for setting compensation" that provides appropriate incentives to management while also being acceptable to shareholders and employees, said Yasushi Muranaka of Deloitte Tohmatsu Consulting.