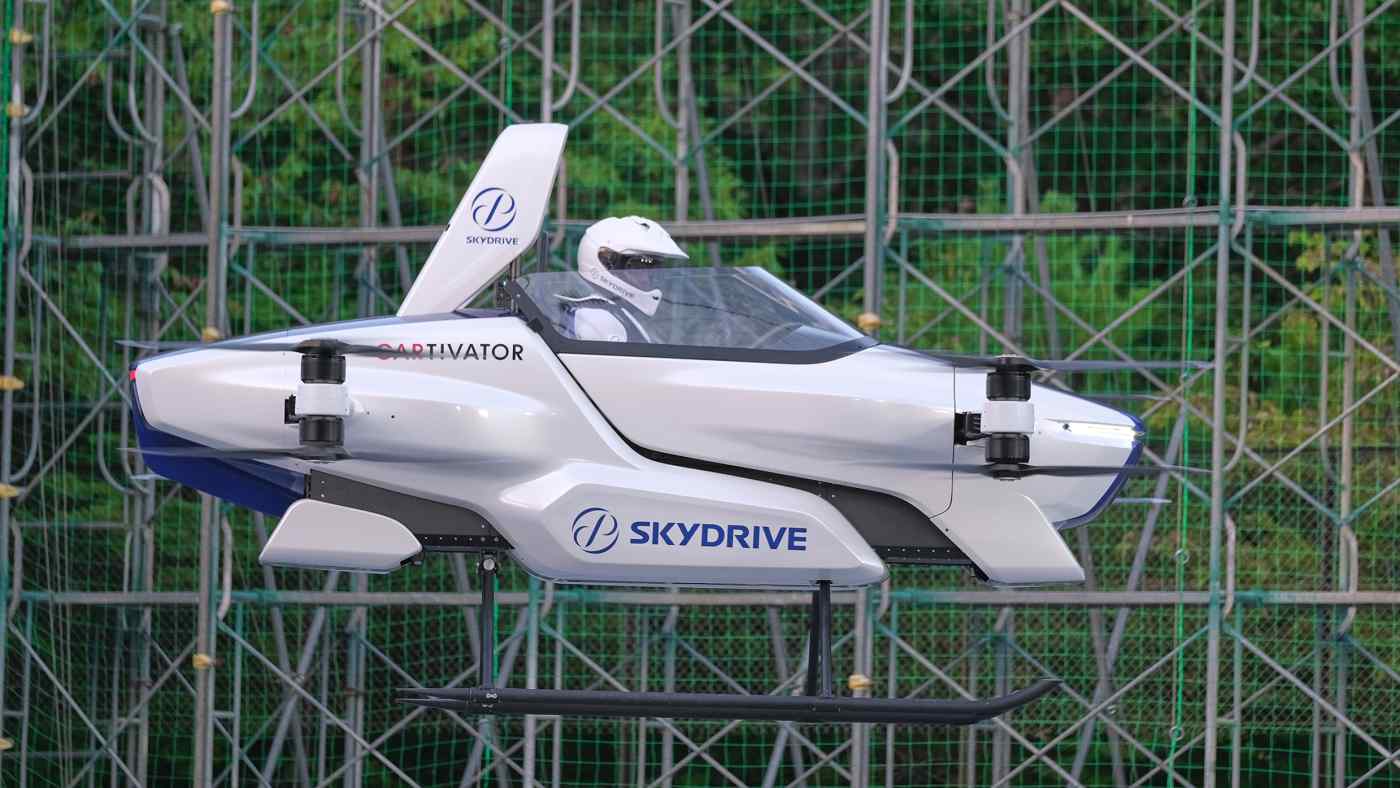 Companies around the world are racing to be the first to bring a flying car to market. (Photo courtesy of SkyDrive)
ERI SUGIURA, Nikkei staff writerSeptember 22, 2021 16:47 JST | Japan
CopyCopied

TOKYO -- A Japanese flying car startup is eager to gain credibility with the public for its sci-fi-like mobility system by forging close ties with local governments and big companies in the western city of Osaka.

Tokyo-based SkyDrive, which is working on an electrically powered vertical takeoff and landing (eVTOL) aircraft, signed an agreement last week with the Osaka municipal and prefectural governments to promote the industry.

SkyDrive hopes to use the 2025 Osaka World Expo to launch its mobility service, ferrying visitors around by air without the need for large-scale takeoff and landing facilities.

"The Strong leadership of Osaka Prefecture and the City of Osaka is pushing our project forward," said Tomohiro Fukuzawa, chief executive of SkyDrive, at the Foreign Correspondents' Club of Japan on Wednesday, adding that Osaka is likely to be where flying cars first take off in Japan.

"Not only installing eVTOL but also building social acceptance and developing a startup ecosystem in Osaka might be possible under the agreement," Fukuzawa said.

SkyDrive has deepened its relationship with Osaka authorities over the last year. In November 2020, the startup became a key member of a roundtable set up by the prefectural government. The group, comprising around 40 companies, is discussing how to bring about an "air mobility revolution." Fukuzawa said SkyDrive is talking with local authorities, including ports, civil aviation and police, "so that people feel safe." 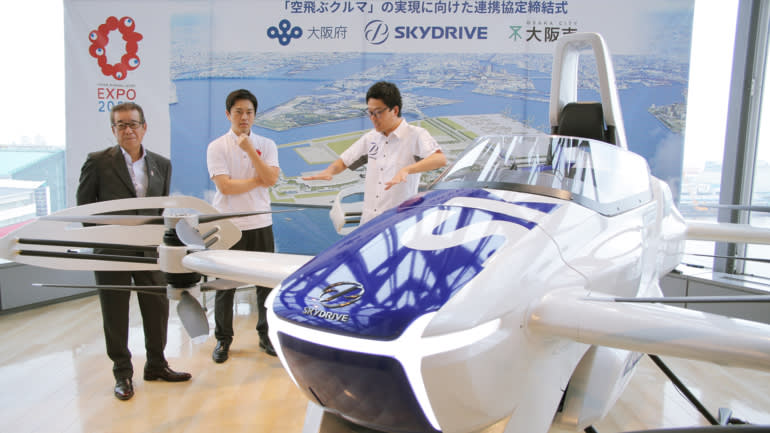 Tokyo-based SkyDrive has signed an agreement with city and prefectural authorities in Osaka to promote the flying car industry. (Photo by Hirofumi Kanaoka)

"We want to start from bay areas [to create] social acceptance and a sense of safety in people's minds," Fukuzawa said, adding that ensuring safety is the biggest challenge for the company and the flying car industry. SkyDrive is working toward certification with Japan's civil aviation authority as it meticulously tests each component in its vehicle and conducts flight tests.

SkyDrive has so far received funding of $48 million and conducted the first successful manned flight of a flying car in Japan open to public viewing in August last year. The company was co-founded by Fukuzawa, a former Toyota Motor engineer, in 2018. Its latest prototype is an electrically powered, propeller-driven vehicle. It has a single-seat and is about twice as big as a typical car

By 2025, the company aims to build a two-seater model, Fukuzawa said.

Competition to bring a practical flying car to market is heating up around the world. U.S.-based Joby Aviation, which Fukuzawa describes as the leader in large eVTOL aircraft, began trading on the New York Stock Exchange last month. It raised a $590 million in January 2020, including $394 million from Toyota.

Germany's Volocopter last week formed a partnership with Urban Movement Labs in Los Angeles to explore the possibility of flying its aircraft in the area.

But many challenges lie ahead. China's EHang Holdings, which operates autonomous drones for deliveries, firefighting and tourism in China, posted a net loss for the fourth year in a row in 2020. Considered a regional leader, the Nasdaq-listed company faces financial difficulties, although it says it is making progress toward certification of its aircraft in China and abroad.