Japan hops onto jump-rope as COVID spurs exercise at home TOKYO -- Jumping rope is becoming increasingly popular in Japan. The "jump-rope dance" by the girl group NiziU is going viral, with many people mimicking it and posting their versions on social media. Amid the coronavirus pandemic, a number of people also have turned to "air jump-rope" to get some exercise indoors as they continue to stay mostly at home.

"It's cute and not too hard," said Haruna Asakura, a coffee shop staffer in her mid-20s in Hitachi, Ibaraki Prefecture.

"I've never danced like that before, but it's a lot of fun!" She included the dance in her repertoire this past summer after its catchy song, "Make You Happy," was released on June 30.

"Make You Happy" was the pre-debut song of NiziU, nine girls selected through a joint audition organized by Sony Music and the South Korean agency JYP Entertainment. The dance in its music video was dubbed the "nawatobi (jump-rope) dance" from their moves at the up-tempo song's high point, when they bounce and swing their arms in fast small jump-rope circles. Many people have learned the choreography and shared videos of themselves doing it.

The official "Make You Happy" video has reached over 140 million views on YouTube. 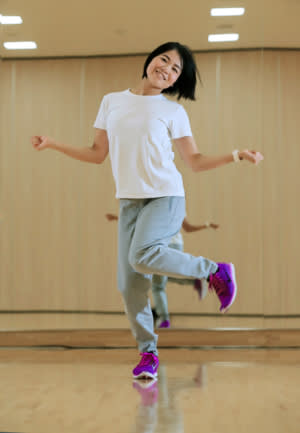 "The jump-rope dance is cute and not too hard," says Haruna Asakura. (Photo by Makoto Okada)

Many NiziU fans are teenage girls and women in their 20s. The pop idol group rose to fame as the progress of their auditions was streamed and broadcast starting at the beginning of this year. Now a wide range of people, including co-workers and a father and daughter, can be seen on social media enjoying jump-rope dancing together.

Asakura, who loves to dance, started practicing the jump-rope dance after seeing the audition program on TV. She learned the dance sequence by playing YouTube videos in slow motion and then posted her own on Instagram.

"I was never interested in pop idols," she said, "and have become a fan for the first time."

A housewife in her late 20s posted a video of her children doing jump-rope dancing on Instagram. A fan of NiziU, she had been watching their videos and doing the jump-rope dance almost every day. Eventually her children -- a 12-month-old, a 3-year-old and a 5-year-old -- started mimicking the dance as well. "The dance is easy for children to learn, and it's a cute dance," she said.

NiziU will make their official debut on Dec. 2 with the release of the CD single "Step and a Step."

"I'm really looking forward to it," the housewife said. "I'm watching over them like their parents."

NiziU will make their official debut on Dec. 2 with the release of the CD single "Step and a Step." (Photo courtesy of Sony Music Entertainment)

With no sign of the pandemic subsiding soon, people have continued to spend a lot of time at home. Jumping rope is becoming a popular way of helping housebound people get back in shape. In August, a 51-year-old living in Tokyo who goes by "Miku" online started playing Jump Rope Challenge, a free Nintendo Switch fitness game, to lose some weight.

This air jump-rope game was made by developers working from home and released in June. It is quite simple. All you need to do is hold the Joy-Con controllers like the ends of a jump-rope and keep on jumping as a bunny avatar on the screen jumps rope in sync with you. When the number of jumps reaches a preset target, the screen marks the accomplishment with images such as flowers blooming.

Miku downloaded the game, thinking it might come in handy at home. Now playing it has become part of her morning routine. One good thing is that "You never trip on the rope, because there is no rope," she said. She raised her daily target every time she hit the mark and now jumps 3,000 times a day. Jump Rope Challenge on Nintendo Switch gives you the feeling of jumping rope, without a rope. (Photo by Makoto Okada)

"Holding the controllers places a load on the arms, and jumping makes me sweat," Miku said. The game initially had a limited free online release until the end of September but has been made available past then because it has proved widely popular -- more than 2.5 billion jumps have been made with the game worldwide so far.

Some of those who are eager to improve their jump-rope skills are taking online lessons. The Japan Jump Rope Academy, a Nagoya-based group that holds classes in Aichi Prefecture and other places, started offering online lessons in April. A free membership allows people to access instruction videos. Those who have a premier membership, costing 3,000 yen ($28.50) per month, can ask questions on the Line messaging app and take a group lesson via Zoom about once a month.

Since the online lessons began, the number of members has doubled to about 80. They are mostly elementary school students, but 20% are adults. People are joining from across the country, including Aomori Prefecture and Tokyo.

In late September, Shoichi Kasuo, a former performer in the international acrobatic troupe Cirque du Soleil and now a director of the Japan Jump Rope Academy, gave a lesson to about 10 people using Zoom. "Let's try to keep pace with the music and jump rope 32 times in 10 seconds," he said. He taught some tricks, and all the participants practiced advanced techniques.

Two brothers in Oizumi, Gunma Prefecture, 11 and 8 years old, became premier members of the academy in May. "I love jumping rope and wanted to do it better," said the older brother. "I'm really happy when I master new stuff." Their mother said she was surprised by their progress. "They have started doing jump-rope techniques I had never seen before," she added.