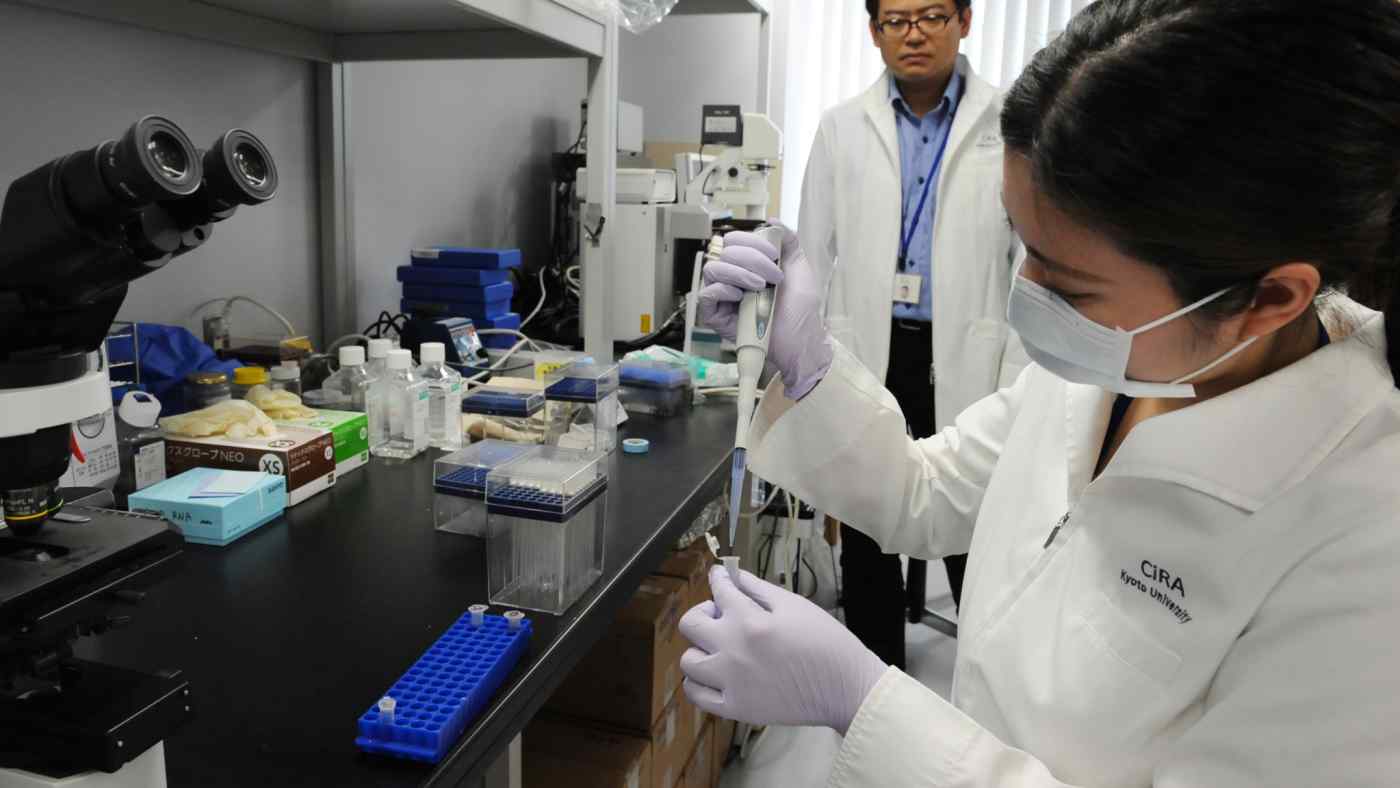 An iPS cell lab at Kyoto University. These type of stem cells can be generated from adult cells, which means they are not subject to the same ethical dilemmas that come with embryonic cells. (Photo by Wataru Ito)
NORIYUKI TAKADA, Nikkei staff writerSeptember 25, 2018 03:57 JST | Japan
CopyCopied

TOKYO -- Japan is scrambling to commercialize a treatment using induced pluripotent stem cells, hoping to mount a comeback in a field it pioneered.

Australian startup Cynata Therapeutics took the world by storm last month by announcing that it has successfully tested the safety and efficacy of a treatment based on induced pluripotent stem, or iPS, cells. This marked the first such company-led clinical trials. Those "master" cells have the ability to become any other cell type in the body.

Cynata completed the first phase of clinical trials for a stem cell therapy that combats negative reactions to bone marrow transplants. It plans to move on to the second phase.

The U.S. Food and Drug Administration granted the treatment orphan drug designation in March, making it eligible for key incentives like tax breaks, and the company is expected to become the first to commercialize an iPS-based therapy.

Japan had led the world in the technology until a few years go, as its pioneer. Kyoto University Professor Shinya Yamanaka discovered iPS cells in 2006, successfully generating them in mice. He won the 2012 Nobel Prize in physiology or medicine for the discovery. Two years later, Japan's Riken -- a government-backed research organization -- transplanted an iPS-derived cell sheet into a human eye.

But Riken halted its research in 2015, in response to newly enacted legislation requiring tougher safety screening for regenerative therapy. "This slammed the brakes on iPS research in Japan, even while foreign companies moved swiftly," said a scientist in the field.

Progress since then has been largely limited to basic research and clinical trials led by doctors at teaching hospitals. Still, Cynata's announcement has energized Japanese companies that have so far shied away from the area.

Healios could become the first company to test an iPS-based treatment in Japan, with plans to start a clinical trial to treat an eye condition called macular degeneration as early as this fiscal year. The startup hopes to commercialize the product by fiscal 2022.

Kyoto University has already launched a clinical trial for Parkinson's, and will start transplanting iPS cells into patients by March. It is expected to partner with Sumitomo Dainippon Pharma on production and sales of the necessary cells, with the goal of commercializing the treatment by fiscal 2022.

Heartseed, a startup that grew out of Keio University, plans trials for a stem cell therapy for heart disease as early as 2021. It has raised a total of 800 million yen ($7.1 million) from Astellas Pharma and other investors, and will work with them to mass-produce heart muscles out of iPS cells.

Fujifilm Holdings, which holds a stake in Cynata, will receive technical assistance from the Australian company, and will start clinical trials and other efforts in Japan toward treating complications from organ transplants. It is also working with Takeda Pharmaceutical to develop a treatment for heart failure.

Nonprofit research institutes and universities can conduct basic research, but they do not have the resources to hold large-scale clinical trials or to manufacture and sell drugs. Businesses are crucial to making the technology available to the public.

But Japanese companies could get frozen out of the market if they do not get in the game quickly enough. Many of them are already trailing American and European rivals in biopharmaceuticals, which are commonly used to treat cancer and arthritis and have been among the top-selling drugs in the last decade.

Regenerative medicine, including treatments derived from iPS cells, will become a more than $100 billion market by 2030, according to Tokyo-based research and consulting company Seed Planning. Businesses across the world are hungry for a piece of that pie.