TOKYO -- Japanese companies made a record number of acquisitions in 2019 as corporate restructuring raced ahead.

However, Japan Inc.'s appetite for more deals will be tested this year amid fears that the global economy is slowing and that the country's corporate reform push may fade.

Domestic acquisitions rose to 3,000 from 2,814 in 2018, while overseas deals climbed to 826 from 777, according to Tokyo-based research company Recof. Both were record highs.

Deal-making has soared in recent years as companies have shed noncore businesses at home and diversified by investing overseas to offset Japan's shrinking population.

Corporate governance reforms have also increased the number of independent directors and activist shareholders, putting further pressure on management to act, often via mergers and acquisitions. 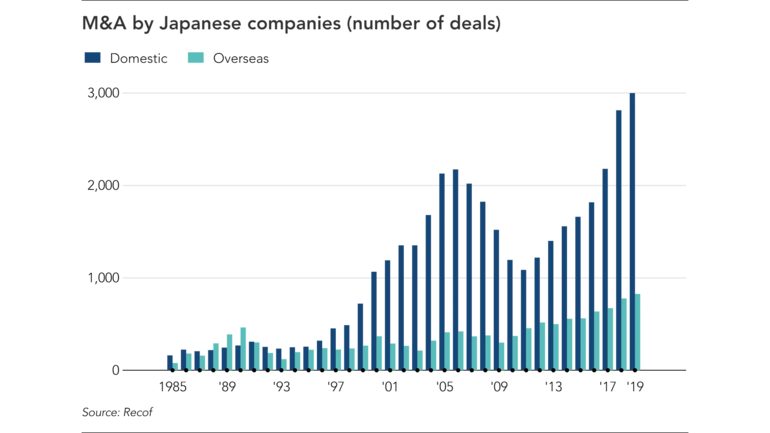 "Hitachi alone is expected to additionally sell hundreds of subsidiaries over the next few years," an executive at a foreign asset manager said. "Second-tier conglomerates will follow its lead."

Meanwhile, overseas deals declined by value to 10 trillion yen in 2019 from 18.3 trillion yen, although the 2018 figure was lifted by one deal: Takeda Pharmaceutical's roughly $60 billion acquisition of Irish drugmaker Shire.

Looking ahead, two issues threaten to dent the growth in Japanese acquisitions that has taken off since 2012. The first is a generalized fear of a global economic downturn.

In October, the International Monetary Fund lowered its 2020 global economic growth forecast by 0.2 percentage points to 3.4%. Japan's growth is forecast at 0.5%, slowing from 0.8% in 2019 as weaker overseas demand hits exports and investment.

"There is no clear direction for 2020 given the economic risks, including the potential fallout domestically" after the conclusion of the 2020 Summer Olympics in Tokyo, said Akifusa Takada, partner at law company Baker McKenzie.

The second risk is that Prime Minister Shinzo Abe's push for governance reform at home may be losing steam.

Under new rules, Japan later this year will require that foreign investors obtain government approval before buying 1% or more in companies related to national security. The regulation has been criticized as targeting the growing influence of activist shareholders.

Despite the progress in Japanese corporate activism, independent directors remain a minority at most companies and often consist of academics and accountants instead of management professionals.

Still, some observers say Japan's long-term challenges will continue to drive the growing M&A trend, whatever the short-term risks and obstacles.

"Population decline will continue regardless of factors like the economy and fluctuations in stock prices," said Ken Lebrun, Tokyo-based partner at law company Davis Polk. "Companies need to pursue growth by looking outward."