TOKYO -- Things can seem pretty slow most mornings at a Central Sports fitness center in Tokyo's Adachi district. People can be seen walking in circles in the swimming pool, rubbing their legs in the studio or resting in a massage chair in the lounge. Instead of the adrenaline-pumping music common to many health clubs, just quiet chatter fills the air.

"I come here to stay healthy, and to keep in touch with friends," said a 67-year-old female member, a regular attendee of morning yoga classes. "I joined 10 years ago after moving to this area. Before that I had never gone to a gym but now I visit five times a week."

For the elderly, there is much to love about fitness clubs in Japan. Trainers often perform slow-moving exercise classes focused on "functional movements." After a session, seniors can enjoy large baths, lunch on tatami mats or in-house massage parlors. It is not uncommon for seniors to spend a whole afternoon in the clubs.

These so-called full-service fitness centers -- typically large, multistory complexes equipped with gyms, pools and studio rooms -- have fueled the growth of Japan's fitness industry for decades. But the biggest operators are now facing a challenge: their loyal members are aging rapidly, while a new generation of health-conscious millennials flocks to smaller upstarts.

Full-service operators "are serving the aging group very well," said John Holsinger, Asia-Pacific Director of IHRSA, an industry association. "But that doesn't leave a whole lot of growth opportunity. They are asking, how do we get the younger age group to come in?" Japan's fitness industry evolved from the swimming schools that emerged after the 1964 Tokyo Olympics. Central Sports, for example, was co-founded in 1969 by an Olympic swimmer. Another company, People, became the country's largest fitness club chain before being bought by gaming company Konami in 2001. Over the next 16 years, the number of fitness clubs more than doubled and industry revenue topped $5 billion, making it the fourth largest in the world.

But much of the growth in full-service health clubs has been driven by the elderly. Those 60 and above now make up nearly 40% of Central Sports' members, and they dominate the facilities during morning hours when younger members are off to work.

"The proportion of members in their 70s is growing," Central Sports President Seiji Goto said in a recent earnings briefing. "The overwhelming majority of people in their 70s had never participated in a sports club ... but the number is increasing rapidly."

Renaissance, another large fitness club chain, has also seen the ratio of 60-plus members increase to 32.5% from 26.9% over the past five years. A survey by the ministry of internal affairs shows that, on average, people in their 60s spend more on sports facilities than any other age group.

The Anytime Fitness 24-hour gym chain is an example of the starkly different model that is luring millennials. Typically located inside buildings near a train station, the small facilities are crammed with treadmills and weightlifting machines. There is no staff early in the morning or late at night -- members use a plastic key to enter. Membership fees average around 7,000 yen ($63) a month. Full service chains can be twice as expensive. U.S.-based Anytime Fitness has 350 outlets in Japan, run by its local franchise partner. Joyfit, another local gym brand, also has more than 200 stores. While most chains offer low-cost memberships, Rizap Group, which sells rigorous personal training courses that can cost north of $3,000, has also generated a buzz with star-studded commercials. The rapid rise of compact health clubs -- less than 10% of new clubs are full-service facilities, according to IHRSA -- has started to eat into the market of traditional players.

There are other reasons why the full-service model is struggling to grow. Building large, integrated facilities has become increasingly difficult due to rising land prices and construction costs. Operators are trying to improve efficiency by replacing staff with technology. But that is hard to do when dealing with the elderly, who are less familiar with technology and more prone to injuries.

As a result, the top three full-service fitness chain operators -- Konami, Central Sports and Renaissance -- have struggled to boost their top line in recent years.

"Some of our customers have been migrating to smaller stores because they are simple, convenient chains," admits Akira Ochiai, president of Konami Sports Club. 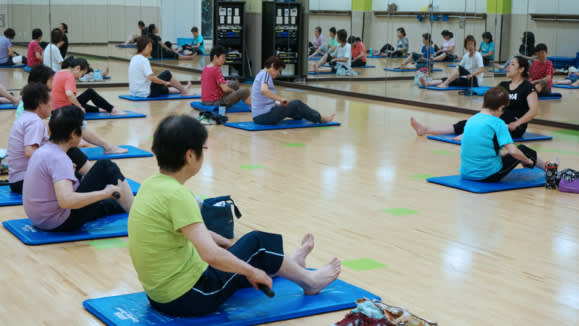 Nearly 40% of Central Sports’ members are 60 or older. (Photo by Wataru Suzuki)

Operators have begun the search for a new growth driver. Konami, in an attempt to combine its strength in grooming instructors with the trend toward smaller centers, launched a compact fitness club brand last year with studios offering short training programs. "The studios will be a differentiating factor," Ochiai said. "We won't be adding many [full-service] clubs...but we want to preserve face-to-face interactions."

Some are exploring the other end of the elderly market. Renaissance's Genki Gym, a fitness-focused nursing home, targets people 65 and over that are classified by the government as requiring nursing care. Certified trainers provide slow-moving exercises used for rehabilitation. Renaissance runs 14 Genki facilities and says it is looking to add more this year.

So far, these new ventures represent a fraction of the operators' revenue. But the tide may shift quickly -- buoyed by their early success, small-club operators are starting to move into the elderly market. Curves, a women-only fitness club chain, stunned the industry with short, group-oriented programs that have proven popular among seniors. After building a massive footprint of over 1,800 small outlets, its Japanese franchise partner bought the chain from its U.S. parent in February and aims to revamp its struggling overseas operations.

Less than 4% of Japanese are enrolled in private fitness clubs, much lower than the double-digit membership rates seen in the U.S. and Australia. But Japan's unique population dynamics make the future far from certain for the full-service giants that have dominated the industry for decades.