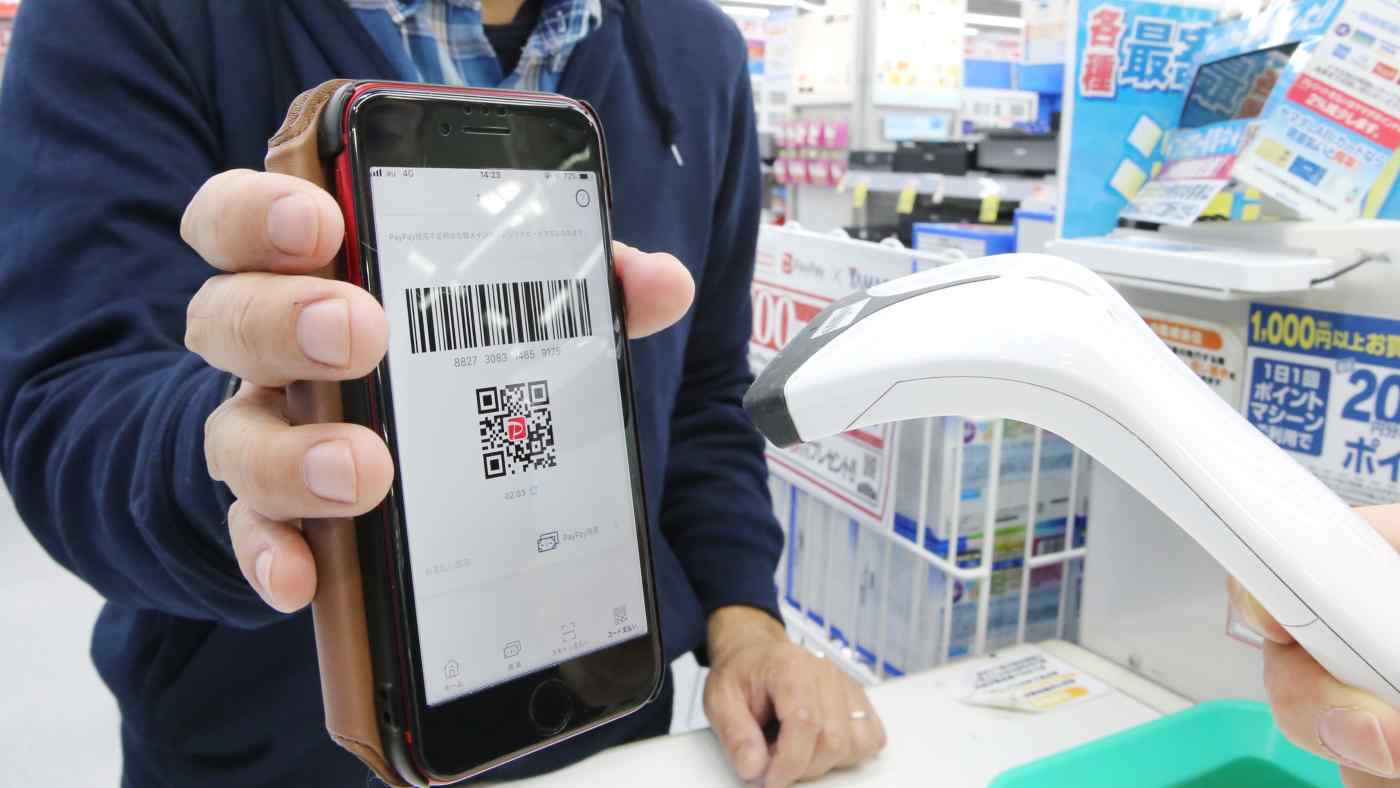 TOKYO -- Operators of cashless payment systems are struggling to expand in Japan, urging companies like SoftBank's affiliate QR payment service PayPay to invest in promotional campaigns in a bid to increase customers.

PayPay launched its second campaign to give out 10 billion yen ($91 million) to its customers this month. Users of its payment app were given discounts of up to 1,000 yen per payment.

The generous campaign represents the company's imperative to familiarize consumers with QR codes, in a country where cashless payments including credit cards account for only about 20% of total transactions. PayPay's CEO Ichiro Nakayama stressed at a press conference that he wants "as many users as possible to try" the technology.

Due to its relatively safe financial environment and reliable cash, Japan's cashless payment rates are among the lowest in the world. According to a 2015 comparative data by Japan's Ministry of Economy, Trade and Industry, as much as 89% of the payments were cashless in South Korea. The rate was 60% in China, and users of services such as Alipay had increased since then. The Japanese government is aiming to raise the rate to 40% by 2025.

PayPay's first 10 billion yen campaign started in December, rewarding users with 20% of their payments made through the app. It reached the target in just 10 days, and the number of users reached 4 million.

The number of retailers that adopted the PayPay system increased tenfold, according to the company. However, Nakayama indicated that is not good enough, saying he will not disclose store counts until "the number becomes a surprising one." 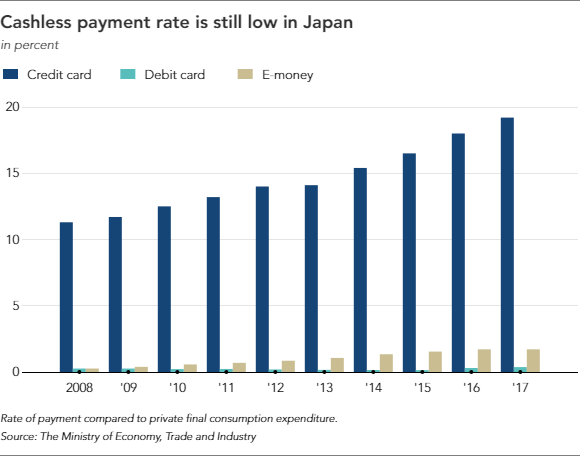 Some called 2018 the "first year" for the spread of cashless payments, which laid the groundwork for cashless payment to become the norm. Seeing opportunity in the market with no monopoly, companies including SoftBank entered the market, fueling competition to boost numbers of both retailers and users.

LINE, another big player that entered the cashless payment market last year, is also spending heavily as it tries to expand user numbers. Like PayPay, LINE enabled stores to adopt its payment system for free. Until last year, other QR code services typically charged stores about 3% of transactions. LINE Pay rewards up to 5% of payments to its users in points.

Origami, one of Japan's first QR code payment service providers when it opened in 2015, launched a series of campaigns to offer 50 percent discounts in selected retail chains, starting in December.

Cashless payment includes credit cards and prepaid cards. Cashless advocates claim that it boosts efficiency and reduces costs in Japan, which is struggling with a declining labor force. Moreover, the availability of credit card and other services would be part of the infrastructure buildup ahead of the 2020 Olympics.

Increased digitization of services has prompted consumers to opt for cashless options. "I considered using LINE pay for the first time," said 22-year-old Sota Nakamura, "because an event ticket I wanted to purchase only accepted LINE pay or credit card."

However, many consumers are still skeptical of the new services. "I don't have a credit card, so I use cash all the time," said a 21-year-old university student. A 50-year-old woman said, "I don't see the need to use payment apps." She was also concerned about the security of these services. 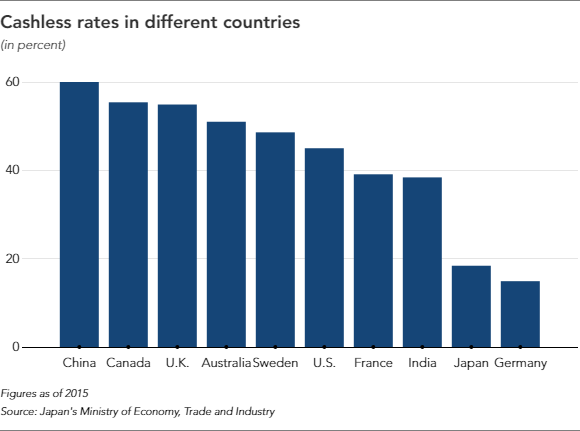 One change that could be a breakthrough for cashless in 2019 is the consumption tax hike planned for October, rising to 10% from the current 8%. As one way of mitigating the negative impact on the economy, users of cashless payments will be eligible for incentives of up to 5% of purchases at certain retailers, including convenience stores.

Largely due to this incentive, Accenture's Einaga predicted that "the increase in the use of cashless would be greater than the past annual growth at around 0.5%." Yoshio Fukuda from the Payments Japan Association, created last year to advance cashless infrastructure, noted that more small and midsize shops are interested in implementing cashless systems because of the planned incentive.

Fukuda also expects increased players of QR code payments last year to drive increased implementation at smaller shops and in the countryside. QR codes offer lower costs for stores compared to other means such as credit cards, since QR codes can be displayed with just a sticker.

Concerned that too many players could confuse users, the industry association is working on a common system for different QR code payment brands. This would make payments easier for users and reduce implementation costs for stores, Fukuda said. "Once shops realize cashless is beneficial, they may implement other systems too," he added.

There are also other incentives that could make the outlook this year positive for cashless. The government is planning to enable companies to pay their employees via mobile money, starting this year. Banks are also trying to boost use of debit cards, which account for only about 0.4% of Japan's payment total. Big retailers are experimenting with unmanned and cashierless stores, which often involves cashless payment systems.

New players are entering the market, including online flea market app Mercari. Yukio Furumi, marketing director of Origami, said, "The market size [for transactions] is large, so there will be no monopoly." Even e-money, which includes the widely used transport payment cards, accounts for less than 2% of Japan's payment total.

However, with many players starting new financial services, the cashless market may become increasingly selective. Japan's another early adopter AnyPay announced last year to end its QR code payment service to focus on other businesses.

But for now, increasing number of players in the market "act as a boost" for the cashless market, Furumi said.