Japan's department stores struggle for direction in age of COVID 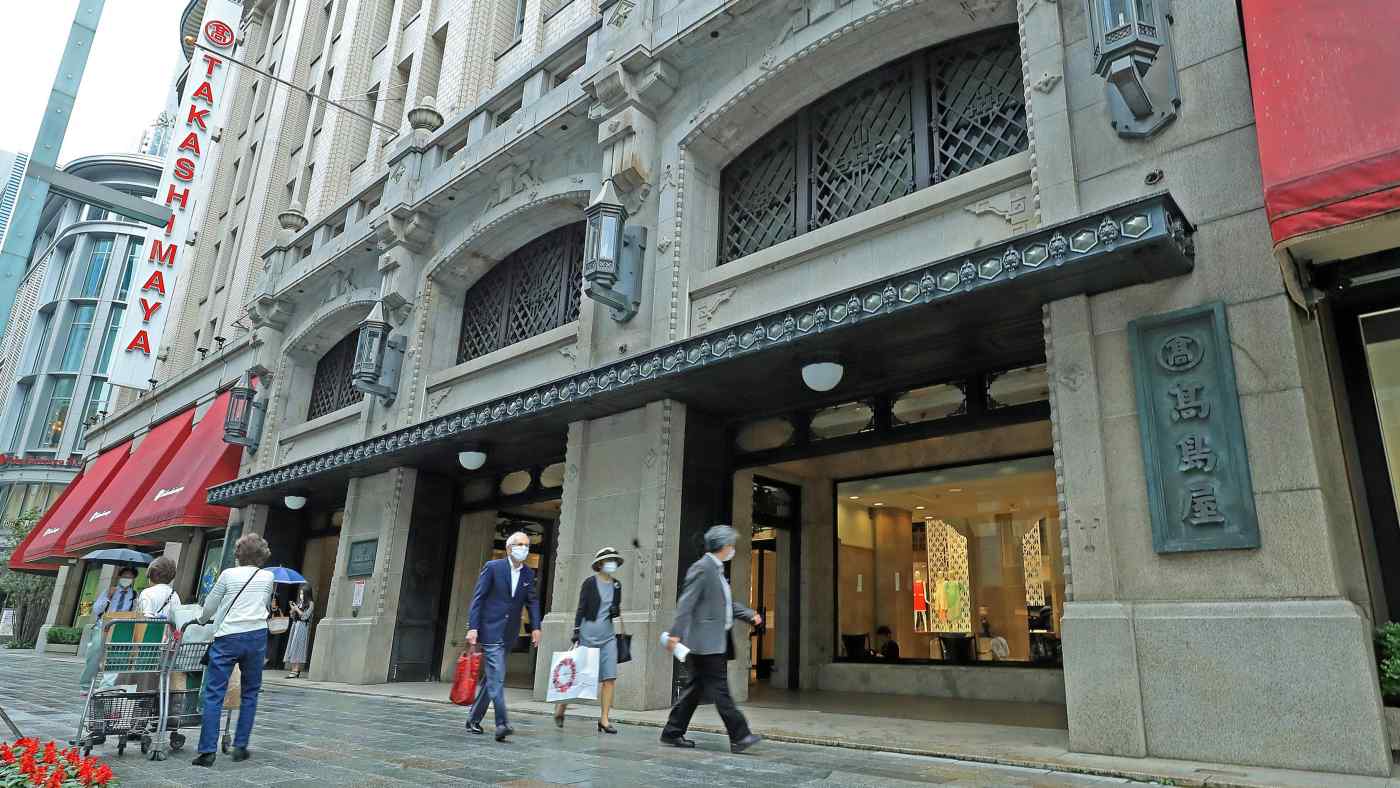 Takashimaya Nihombashi in Tokyo reopened on May 18 after being closed for more than a month due to the coronavirus. (Photo by Makoto Okada)
RURIKA IMAHASHI, Nikkei staff writerAugust 21, 2020 13:29 JST | Japan
CopyCopied

TOKYO -- The women's floor of the Takashimaya Nihombashi department store was filled with colorful summer outfits and red-and-yellow sale signs, and shop attendants waiting to greet customers with friendly calls of "Irasshaimase," or "welcome." The only thing missing was the customers.

The store's midsummer sales campaign usually attracts throngs of bargain-hungry shoppers, but with Japan's coronavirus cases on the rise again and the country's borders still closed to most foreign travelers, brick-and-mortar retailers are struggling to win back customers. Sales at Takashimaya Nihombashi in July -- normally one of its busiest months -- dropped 18%.

Takahiro Kazahaya, a retail analyst at Credit Suisse Securities, described the situation bluntly: "Department stores have become a place that consumers do not want to go."

Departments stores around the globe were already struggling with the rise of e-commerce when the coronavirus struck. Recent high-profile bankruptcies in the U.S. include Nieman Marcus and J.C. Penny.

Japanese department stores, once dubbed the "kings of retail," were considered to be in a more secure position than their global peers thanks to the relatively low penetration of e-commerce in the country and the recent influx of tourists. The pandemic, however, has exposed the weaknesses in their traditional business models.

The first blow came from the sharp drop in Chinese tourists after Beijing banned group tours in February to stem the coronavirus outbreak. Unlike U.S. department stores, which rely mostly on domestic spending, some stores in Japan depend on tourists for as much as 30% of their sales.

An even bigger blow, however, came on April 8, when Japan declared a state of emergency and requested department stores, among other businesses, to temporarily close. The more than monthlong closures hammered sales.

Though stores have since reopened, Takashimaya said it will "take time" for the industry's sales to recover to pre-coronavirus levels.

Kazahaya of Credit Suisse attributes this to changes in consumer behavior. Whereas shoppers used to take the train to a downtown department store and spend hours browsing, he said, they now drive to stores near their homes and spend less time shopping.

"This is the new norm of consumer behavior in the time of the coronavirus. The department store's strength of being located in the heart of the city near a station does not work anymore."

The numbers seem to bear this out. The government fully lifted the state of emergency in late-May and department stores have resumed regular operations, yet department store sales nationwide slumped 19% to 382.9 billion yen ($3.6 billion) in June, according to the Japan Department Stores Association. Sales in large cities were down 22%, compared with 11.3% in rural areas.

The second wave of coronavirus infections -- new cases in big cities have spiked, with Tokyo and Osaka recording record daily highs -- is expected to further delay the recovery of department stores.

While traditional brick-and-mortar stores are struggling, e-commerce players are cashing in on the pandemic and shoppers' new tendency to stay home.

"Although we do not disclose sales figures, customers' use of Amazon has increased significantly," said Amazon Japan President Jasper Cheung in an interview with the Nikkei in June. Cheung said demand "far exceeded" Amazon's usual peaks, such as during the year-end shopping season.

Online fashion retailer Zozo said on July 31 that it expects a 47% increase in net profit for fiscal 2021. CEO Kotaro Sawada said its online business is "strong" amid the pandemic.

Department stores are trying to jump on the online shopping bandwagon. Isetan Mitsukoshi Holdings is aiming to boost online sales from 25 billion yen to 30 billion yen this year by increasing the number of items on its online store. Takashimaya saw an 89% rise in online sales in the first quarter, mainly in food and cosmetics. The company said it aims to "further strengthen" its e-commerce business. Online sales remain a very small percentage of the total for department stores, so there is still a lot of room for growth.

The figure for Isetan Mitsukoshi Holdings is just 2%, the company told the Nikkei Asian Review. The fact that department stores sell mostly high-end brands and these makers tend to have their own online shops makes it difficult for the likes of Isetan to promote its own e-commerce operations, according to the store.

But industry experts argue that even if department stores can increase online sales, e-commerce is not a magic bullet.

"Department stores should ask themselves the question: Can strengthening e-commerce really be a growth strategy?" said Kazahaya at Credit Suisse Securities.

Kazahaya pointed to U.S. department store giant Macy's as an example. Macy's e-commerce business reached 25% of total sales in 2019, but the company announced in February that it would close 125 stores and lay off 2,000 employees.

One of the biggest draws of department stores, Kazahaya argued, is their large selection of high-quality goods. "They have to stick to that strength," he said.

Shin Ikeda, professor at Ritsumeikan University, agrees. "Even if department stores bolster their e-commerce business, they won't be able to rival Amazon," he said.

Areas where department stores can improve, experts say, are efficiency and profitability.

Compared with their U.S. counterparts, Japanese department store operators rely more on rents from tenants. This means the operators themselves do not have to shoulder as much inventory risk, but it also pushes up prices for shoppers.

"If you look at the total cost of both the tenant and the department store in the whole entire business combined entities, it's very labor inefficient," said Mike Allen, an analyst at Jefferies Japan, adding that this inefficiency leads to higher prices that can turn away customers.

Changing the traditional composition of the sales floor is another major challenge. Japanese department stores have largely relied on apparel sales, which have declined by more than 1 trillion yen over the past decade, according to the Japan Department Stores Association.

One option, according to Allen, is for department stores to rent out more space to large specialty stores like furniture chain Nitori or Fast Retailing. In a surprising move in February, electronics retailer Bic Camera opened a store in Nihombashi Mitsukoshi, one of Tokyo's most upscale department stores.

Despite the coronavirus headwinds, Allen does not think Amazon and other e-commerce players can ever fully take the place of brick-and-mortar department stores.

"Department stores can't really be replaced," Allen said. "The problem is how much do people need them and how efficient can they be."