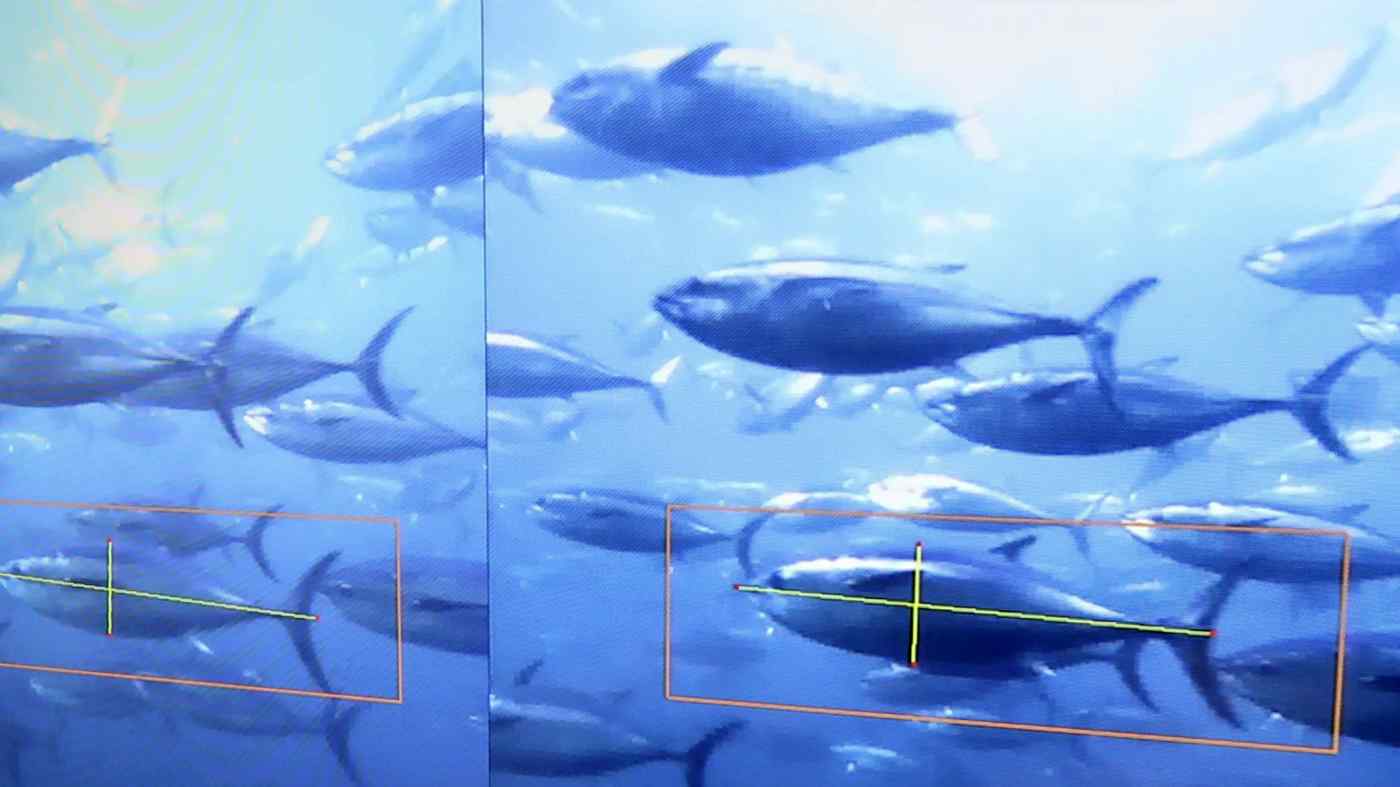 NEC is testing a system that uses video cameras and AI to measure the size of fish, so farmers can better plan their feeding.
AKIHIDE ANZAI, Nikkei staff writerMarch 16, 2019 17:19 JST | Japan
CopyCopied

TOKYO -- Japanese fish farmers are turning to drones, artificial intelligence and cloud computing to cut costs and improve operations as demand for seafood continues to soar.

Farmed seafood is expected to become even more important as wild catches dwindle due to overfishing. More efficient farming operations will be crucial to keep up with growing demand, particularly in a country where the population is aging and the workforce is shrinking.

Japan's biggest tech and telecom companies, including Sharp, KDDI and NEC, are eager to develop high-tech solutions for fish farmers and cultivate new business as their more traditional operations come under pressure.

At the same time, the Japanese government amended the country's fisheries law last December for the first time in 70 years to allow nontraditional companies into the fisheries business, opening the door for further developments in smart fishing.

The trials are underway at a farm in Miyazaki Prefecture, in southern Japan, that boasts around 200 tanks filled with yellowtail. Some of these tanks have been fitted with multiple cameras to capture video of the fish as they swim around. AI technology uses those images to measure the length and width of the fish and automatically calculate their weight, allowing farmers to adjust the timing and volume of their feed accordingly.

According to Japan's Fisheries Agency, feed accounts for 60% to 70% of fish farmers' costs.

Cutting down on wasted feed will only become more important as the global population -- and its appetite for seafood -- grows. A report by the World Bank and the Food and Agriculture Organization predicts that aquaculture production will reach 93 million tons in 2030, accounting for 62% of total demand.

While NEC started testing its technology on yellowtail, it has since expanded to tuna, and Hayasaka said the company is considering including other varieties such as salmon. It is also eyeing selling to overseas producers, including Norway and Chile. "We use cloud services for transferring data, so we can do business anywhere," she said.

KDDI, the second-largest mobile career in Japan, is experimenting with mackerel farming in cooperation with a fisheries cooperative in Obama, a city in the western prefecture of Fukui.

Mackerel is very popular in Japan and is commonly used in sushi, but overfishing has taken a devastating toll on wild stocks. Forty five years ago, fishermen from the port of Tagarasu in Obama caught 3,580 tons of fish a year. In 2015, the annual catch for the entire city came to just 1 ton.

"Mackerel is not well suited to fish farming because its skin is delicate and easily damaged," said Tomonari Ishiguro, a manager in KDDI's "internet of things" business development division. "That's why we need to make fish farming more efficient."

KDDI has developed that connects to the internet and measures environmental data such as water temperature, oxygen levels and salt concentration, allowing farmers to monitor conditions remotely. "To fatten fish, the timing of feed is very important," Ishiguro said.

Mackerel are most active -- and hungry -- when the water is 15 C. Mackerel eat much less in winter, when water temperatures are below 13 C. According to KDDI, its sensors can help fishermen plan their feeding more efficiently. The can also schedule feeding time and amounts using a tablet.

"Fish farming has long depended on fishermen's experience and inspiration. We are trying to visualize those things," Ishiguro said.

Tadazumi Hamaie, an Obama fisherman in his early 60s, says KDDI's feeding management app is easy to use, even for older fishermen who may not be good with computers or smartphones.

"It is much more efficient than before," he said. "We can't go back to the old days."

KDDI's main carrier business is under pressure after the government called for telecom companies to slash fees by as much as 40%. They are searching new sources of revenue through products such as sensors.

Revenue from smart fishing is still less than 1 billion yen ($9 million), but Hironori Abe, a section head in KDDI's IoT division, said the business has the potential to grow 10 or even 100 times larger. Companies in other markets, such as Taiwan, have also shown interest in KDDI's technology. 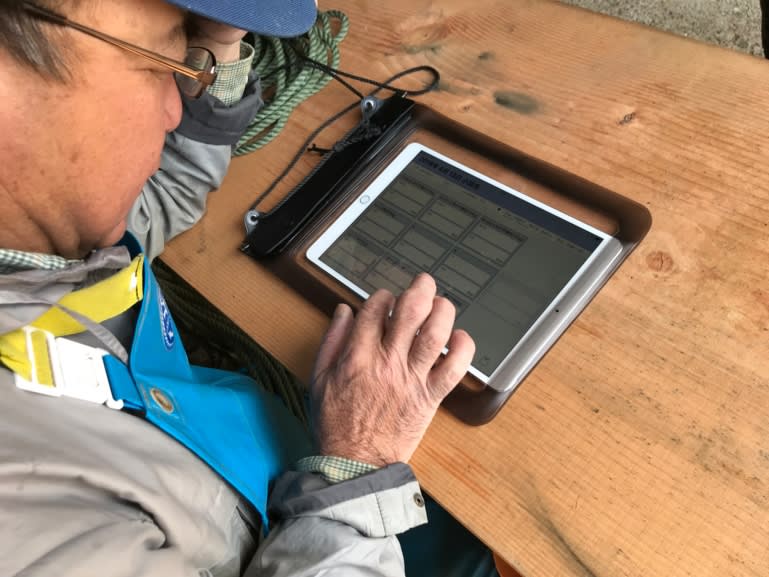 A fisher farmer in the city of Obama uses a tablet computer to record the volume and timing of feeding, helping preserve his know-how for future generations. (Courtesy of KDDI)

Sharp, meanwhile, has teamed up with NTT Docomo and the University of Tokyo to test new technologies for oyster farming. The experiments are slated to run through March 2021 in Hiroshima Prefecture, Japan's main oyster-producing region. Sensors attached to buoys and rafts measure water temperature and salt concentration, while drones search for oyster larvae and observe tides. This data is then analyzed to determine the best areas and time for attaching oyster spats to shells.

Sharp has said it aims to use next-generation infrastructure, such as 5G, to develop its new service.

KDDI's Abe also has high expectations for the new communications standard, noting that "the large data-transfer capacity and low latency of 5G would be helpful" for fish farming.