TOKYO -- Japan's youth marketing startup AMF is catching the "third wave" Korean boom that is currently trending among Japanese millennials. This time it's appealing not just to fans of pop idols and TV dramas -- it's gaining traction among a broader range of consumers.

Even amid renewed political tension between Japan and South Korea concerning the long-festering wartime labor issue, a strong Korean influence is seen everywhere in Japan, from food to fashion.

"Young people distinguish culture from politics," said Hwang Seon-hye, director of Korea Creative Content Agency Japan Business Center. She noted that she does not see any immediate impact of the political sentiment in the current boom.

"Korean fashion items are often cheaper than other brands and are photogenic, so young people choose them naturally," said Rika Shiiki, a 20-year-old university student. Young people today do not care whether they come from Korea or not, she added.

Shiiki is the founder of AMF, a company that works with about 200 schoolgirls and university students to ascertain their views and tendencies, which are often too alien and fast-changing for older people to keep up with. AMF's clients are companies that want to gain access to younger consumers and the lucrative market they represent.

The company is already five years old and profitable, and has worked with large companies, including Yahoo Japan and Japan Post. Its latest venture is to sell Korean fashion online.

The website has a database of apparel items in Dongdaemun, Korea's famous wholesale fashion market. Influencers pick their favorites and promote them through Instagram and on kloset. Influencers get a certain percentage of their sales.

There are currently about seven influencers who have their own pages on kloset, including Shiiki herself. She plans to increase the number to about 50, based on their popularity and whether she and the schoolgirls like them.

In Japan, Shiiki sees Korean culture as the current trend since last year. The first Korean boom was in the early 2000s when the "Winter Sonata" television series became a hit among middle-aged Japanese women. The second came around 2010 when Korean "idol" groups such as Girls' Generation became popular among a broader audience.

Compared to the first two, the current third boom is "broader through the culture and among young people," according to Shiiki. The boom includes apparel and cosmetics, as well as idols such as the girl group Twice and Korean-inspired food such as "cheese dakgalbi."

According to KOCCA Japan Business Center's Hwang, the recent boom is also a fruit of the government initiative to invest in culture in the late 1990s after the Asian financial crisis. "After 20 years, directors and other talents who grew out of it are beginning to stand out," she said. Exports of Korean music are growing by 10% to 15% annually. 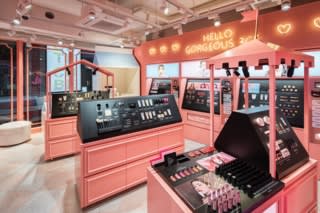 Japan is a major market for Korean cultural content. About 50% of total content exports go to Japan, due to cultural and geographical proximity as well as the eager market, according to Hwang.

Recently a Japanese TV program canceled a planned performance by Korean boy band BTS, after one of its members was seen wearing a T-shirt interpreted as celebrating the nuclear bombing of Japan.

While Hwang admitted there might be some impact in terms of business contracts, she said that the overall trend would persist. She also noted that broadcast TV largely ignored Korean content the last time Japanese-Korean political sentiment worsened in 2012, but it was still shown by satellite broadcasters and that a strong fanbase remained.

It also helps that the third wave is primarily among the millennial generation. Korean content and products fit well with young people who are into Instagram, Hwang said. Goods tend to be "reasonably priced, with cute shapes, pink coloring and cute packaging."

The impact of the recent trend has also crossed over to language learning. According to language school operator ECC, the number of people showing an interest in its Korean courses increased by 35% between April and November 2018 compared to the previous year. It has also launched a promotion in collaboration with a Korean girls group to target young customers.

Meanwhile, AMF's Shiiki is thinking of expanding her business model abroad, this time to sell Japanese fashion items through local influencers in other Asian countries.

"Only a minority [of the younger generation] are interested in brands. Individuals are more powerful," Shiiki said. Who else is using the product, and user reviews, are important information for young consumers, she said. She thinks this trend is the same outside of Japan.

In China, local media reported that the online short video platform TikTok added an e-commerce function this year. According to a Chinese research company iResearch Consulting Group, almost 60% of internet celebrities with more than 100,000 followers are starting to sign contracts with advertisers.

Shiiki is looking to launch her business abroad. "I am thinking of Taiwan and Thailand," she said.