TOKYO -- Japan's startup investments soared about 150% in the last five years as companies seek innovative technologies and create specialized funds to zero in on specific fields like artificial intelligence.

Domestic investment in startups grew 16% last fiscal year to 126.6 billion yen ($1.16 billion), according to a survey on 106 venture capital and corporate venture capital firms released on Wednesday by Venture Enterprise Center. It is the first time the figure has topped 120 billion yen since the survey began in fiscal 2011.

The result is likely on par with fiscal 2006, when broadband service was introduced, and fiscal 2000, during the height of the internet bubble. Compared to those last two peaks, however, recent funding covers a broader range of fields, including AI, biotechnology, robots and space. Japanese venture capital may still be modest compared to the U.S., which topped $70 billion last year, but its scale is gradually growing.

Also in 2017, robotics startup Groove X, founded by a developer of SoftBank Group's Pepper humanoid robot, agreed to receive a maximum of 6.45 billion yen in funding from enterprises including INCJ. 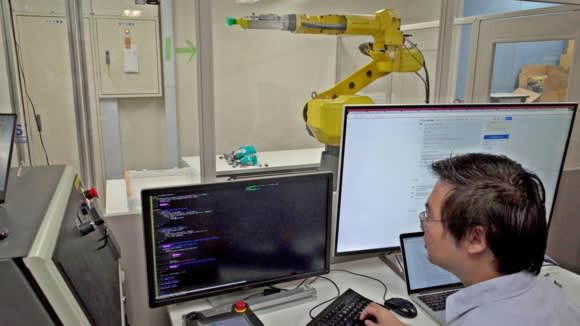 While companies looking for the next innovation are eager to back startups, there has been a proliferation of funds that only invest in specified areas.

SoftBank's $100 billion Vision Fund, which counts Saudi Arabia among its investors, has already backed about 30 companies since launching last year. Conspicuously, however, the fund has concentrated on overseas startups rather than Japanese ones, in which it has made no investments.

Meanwhile, SoftBank subsidiary Deepcore, an incubator for AI talent, launched a fund that will dole out a maximum of 6 billion yen to "deep learning" ventures, mainly in Japan. It has decided to make its first investment in Tokyo-based Vaak, which uses AI-backed software to analyze security footage.

A virtuous cycle may be generated should these funds recover their investments through such means as initial public offerings and search for new targets. Raksul, a platform connecting users and printers, is among the promising startups preparing to go public.

The boom in startup funding has been underpinned by historically low interest rates, however, and monetary tightening around the world could impact investor appetite going forward.