Quirky comforter stokes US and Chinese interest in Japanese design 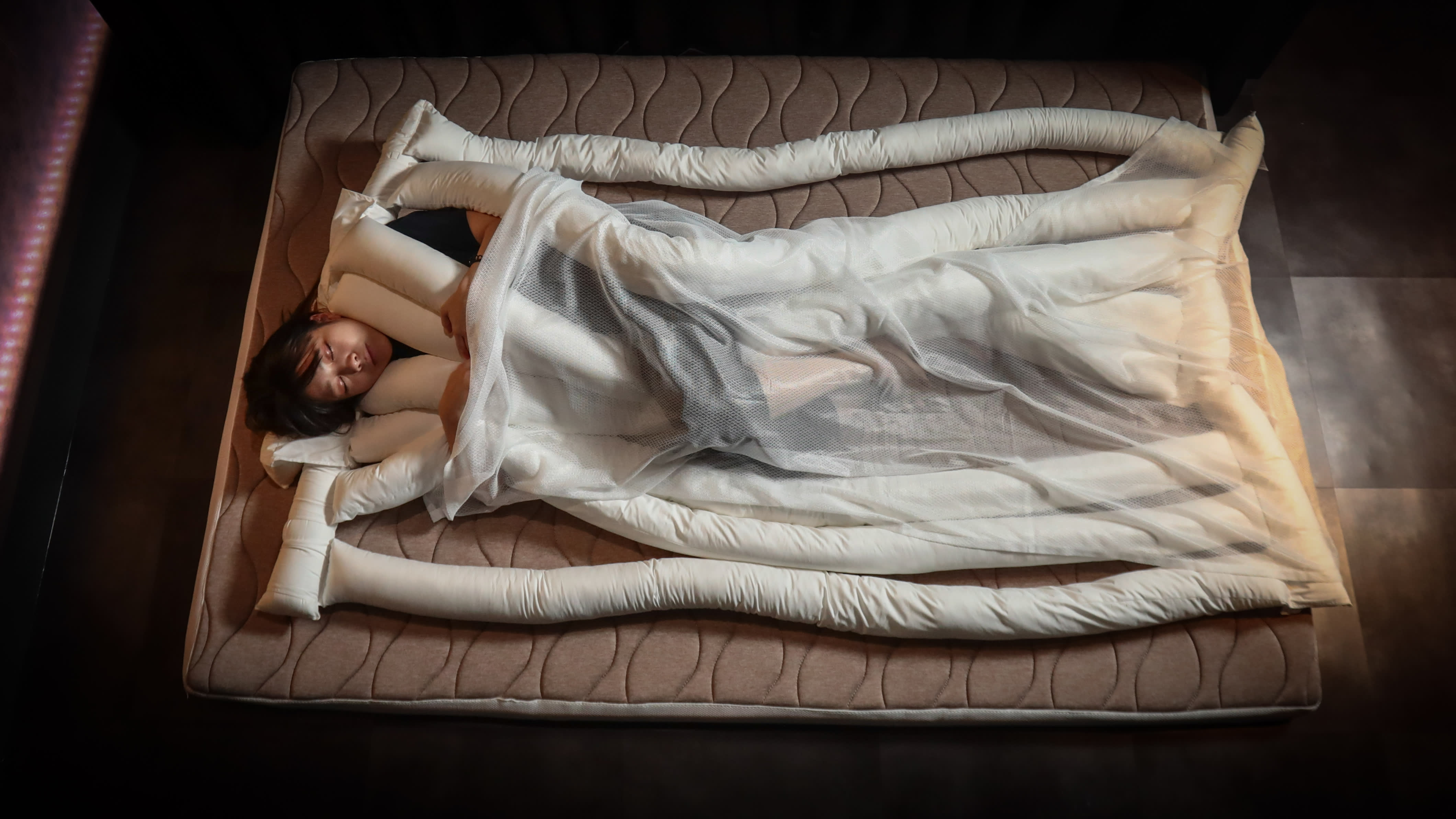 TOKYO -- Eating noodles at night might be a no-no for carb-conscious hipsters, but what about going to sleep entwined in an udon noodle duvet?

Japan's latest sleep sensation offers just that experience, and it has proved a hit with consumers in China, where a surge in demand for quality Japanese products has lately helped turn a trade deficit with China into a surplus.

That is even true given the coronavirus outbreak, which is hitting Chinese consumer demand and thus Japanese consumer companies as well -- although not all of them.

"There are negative effects for Japanese business such as the closure of factories," Nobuhiro Tsunoda, chairman of EY Japan Tax, said. Although, at the same time: "Japan's high quality masks are largely being purchased by Chinese people."

Osaka-based sleep experts Golden Field, which makes the duvet, also plans to start selling them from this spring in the U.S., where the Centres for Disease Control and Prevention estimates one-in-three adults do not get enough sleep. For insomniacs, the company says the duvet can be especially effective for sleepless, hot summer nights.

Inspired by thick, smooth texture of udon noodles -- which are traditionally served cold on a rectangular bamboo "bed" -- the quirky udon noddle comforter has already generated 320 million yen ($2.9 million) in revenue since its launch last August.

The idea for the blanket came to Hiroki Nagano, a Golden Fields executive, over a lunchtime meal of cold udon noodles with some colleagues on a stifling hot Japanese summer's day.

"My colleague pointed at the noodles and she said: I want to sleep inside these cold noodles," Nagano told the Nikkei Asian Review.

After going on sale last August, Golden Field is moving around 120 quilts a day. Before the coronavirus outbreak, the product was among the top 10 search terms on Chinese social media platform Weibo.

Nagano said Golden Field hopes a recent tie-up with Chinese e-commerce giant Alibaba will help convert the product's social media buzz into sales next month when it will be available for purchase from Alibaba's Tmall platform. "China has a wealthy class of a 100 million people who consider Japanese brands to be of high quality and high status," said Tsunoda. "The Chinese approach to consuming Japanese goods, which is different from in America, is to assess them for their uniqueness and Japanese-style attention to detail."

With a target of 10,000 units per month, Golden Field hopes to triple its sales in China as "the two countries both share the culture of eating noodles," said Nagano.

In addition to its obvious fun factor, Nagano says the udon blanket offers a novel solution for hot summer nights, allowing users to choose how much of their body they want covered. With closable gaps between its 10 "noodles," the blanket provides ample openings to expose overheated limbs and allow air to circulate.

"It is better to make the feet and hands warm before falling asleep, but after entering into a slumber, lowering their temperature enables deep sleep," said Nagano.

By sliding another blanket over the top, the udon duvet also helps to trap warm air when the weather turns cold. "It is warmer than conventional blankets," said Nagano.

The company's treatments are so popular that as of this month there were an astonishing 543,878 people on the waiting list for a reservation at one of its four Japanese salons. Recently opening a salon in New York, Golden Field has also had plans to open a branch in China.

Golden Field is not the only Japanese company benefiting from the growing interest in Japanese goods among Chinese consumers.

Cosmetics giant Shiseido recently allocated around 170 billion yen to expand its domestic production capacity in response to rising demand for "Made in Japan" products from Chinese visitors, as well as tourists from other Asian countries.

The move is typical among an increasing number of Japanese companies that have seen China as a sales market rather than just a manufacturing base.

Shiseido has also formed a partnership with Alibaba to expand its online sales using the Chinese e-commerce platform's data.

Toiletries maker Lion is set open its first domestic toothpaste factory in 52 years in Kagawa Prefecture in western Japan, where it may produce a line developed for China.

Japanese exports to China grew 9.3 percent in 2018 from the previous year, thanks to double digit growth in areas such as manufacturing equipment, luxury cars and cosmetics, according to the Japan External Trade Organization.