TOKYO -- Japanese banks are moderating their push into other Asian markets amid signs of economic slowdowns across the region.

The balance of overseas loans at Mitsubishi UFJ Financial Group, the nation's largest bank, stood at 43.9 trillion yen as of December, down 2.7% from 45.1 trillion yen a year earlier, according to the lender's third-quarter earnings release.

But the interest rate spread improved to 1.35% from 1.23% for the bank's overseas operations, indicating a greater focus on loan quality than on quantity. The spread refers to a difference between the average yield on loans and the average cost of funding.

"MUFG is clearly preparing for a possible downturn in the economic cycle," said Shinichiro Nakamura, bank analyst at SMBC Nikko Securities. "They seem to believe this is not a time to expand assets or lending."

About 40% of MUFG's $1 trillion in loans have been extended overseas. Of this, a third is in Asia. For the nine months through December, MUFG's core operating profit dropped 12%, though reduced credit costs and greater contributions from the bank's Morgan Stanley affiliate allowed for a 10% increase in net profit.

At Sumitomo Mitsui Financial Group, the nation's second largest banking group, overseas loans increased to $242 billion from $232 billion, but loans for Asia stayed flat at $82 billion as the bank shifted its focus to the booming U.S. market.

SMFG reported an increase in credit costs to 53 billion yen for the nine months, up from 52 billion yen a year earlier. It cited losses on overseas loans.

Asia's slowing economies, the result of the Sino-U.S. trade dispute, pose a challenge. Japanese banks have been looking at the rest of Asia to offset sluggish loan demand and depressed interest spreads at home.

The Mizuho Financial Group is also keeping a wary eye on Asia's downtrend. But for now, Japan's third largest banking group has chosen to take risks as its rivals hold back. 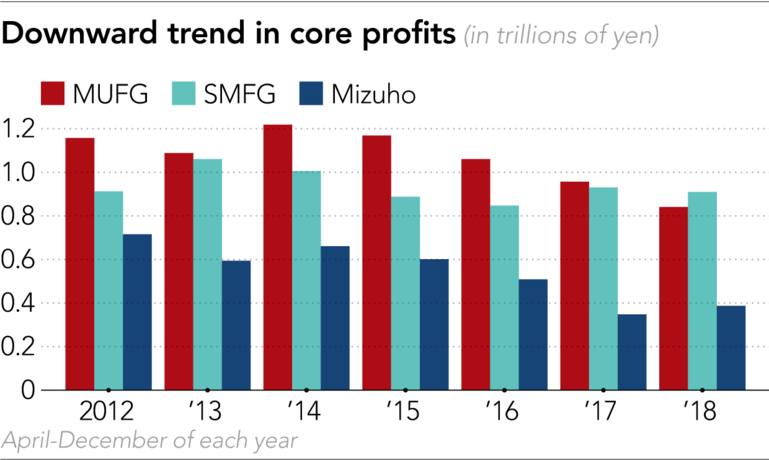 Mizuho boosted the balance of its overseas loans by 19% from a year before to $259.3 billion by the end of December. Asia accounted for about half of the growth.

The lender appears to be sacrificing some of its profit margin in a quest for market share, as the interest spread for its overseas loans narrowed to about 0.8% from about 0.9%.

Mizuho has embarked on its Global 300 campaign, meant to grow the amount of business it does with 300 top overseas companies. Through the campaign, the bank is touting its comprehensive commercial banking services in economies like China, Taiwan, Vietnam and Thailand.

Sumitomo Mitsui says the tapering of loan growth in Asia will be temporary. "Our goal remains the same: to become an Asia-centric bank," an SMFG representative said.

"We expect the mega banks will continue to seek growth overseas because growth in the Japanese market is weak -- with abundant corporate liquidity and limited investment opportunities," said Kaori Nishizawa, a bank analyst at Fitch Ratings. "We see that the growth will be primarily in Asian emerging markets, and in the U.S. and Europe, where they already have established operations."

Until recently, Japanese banks had been aggressively building their presence in Asia.

In 2013, MUFG took over Bank of Ayudhya in Thailand. In 2016, it acquired 20% of the Philippines' Security Bank. Last year, it doubled its stake in Indonesia'sBank Danamonto 40%. Meanwhile, SMFG owns Bank Tabungan Pensiunan Nasional, a midsize bank in Indonesia, and Mizuho has partnered with the Export-Import Bank of Thailand.

Southeast Asia's relatively small markets have more potential for growth than Japan, where the population is on the decline and demand for loans is weak. The BOJ's policy of targeting government bond yields to zero has also deprived banks of opportunities to make money from investing in JGBs.

Because of the weak demand, MUFG, SMFG and Mizuho use only about 60% of their deposits for loans. The remainder goes into various securities, increasingly higher-yielding foreign government bonds. 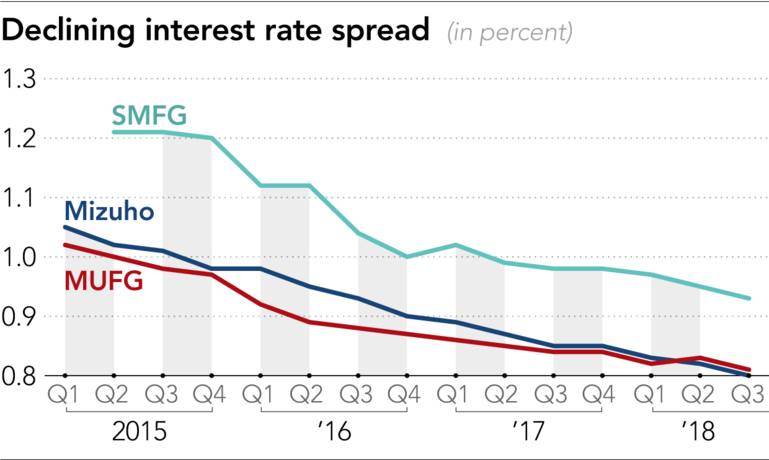 But even in their securities investing, Japanese banks have been feeling the pinch since the U.S. Federal Reserve began raising short-term interest rates. This increases the cost of borrowing U.S. dollars, making investments in U.S. government bonds less profitable.

The turbulence in the bond market has hurt institutions with large market operations, such as Mizuho and Nomura Holdings. Nomura, in particular, plunged into a 101 billion-yen net loss for the nine months through December. It is expected to announce belt-tightening measures, including a 60 billion-yen cut in fixed expenses over the next four years.

Other banks are already slashing costs. It is a long-term slog. Mizuho said in 2017 that it will eliminate 19,000 positions and 100 branches over the following 10 years. SMFG has been slimming down its retail banking operations. It is toward the end of a three-year period that began in 2017 in which it intends to cut expenses by 50 billion yen and scrap 4,000 positions. MUFG is to automate 30% of its operations by 2024. It expects software and artificial intelligence to do the paperwork that would otherwise require 9,500 employees to process.

"All Japanese banks recognize the importance of technology, including automation and enhancing online capabilities to help overhaul their branch networks," Fitch's Nishizawa said.

A Mizuho representative said it will take years, possibly a decade, before automation and branch consolidations start making a dent in its 1 trillion yen operating cost.