TOKYO -- Corporate Japan is on another English drive.

But the latest moves to adopt English come with softer policies that take into account employees' positions and comfort with the language.

This means Japanese will not be completely prohibited in workplace communications. Japanese employees at companies now adopting English can still use their mother tongue depending on the situation. And less-fluent English speakers will not be made to feel overburdened.

The edicts are coming down as the boundary between domestic and overseas operations blurs.

Skin care and cosmetics maker Shiseido is a case in point. It began transitioning to English on Oct. 1. About 2,500 employees at its global headquarters in Tokyo and Shiseido Japan, a unit overseeing domestic operations, are now being urged to email and conduct meetings in English as long as one non-Japanese is involved.

Shiseido will treat English as its "semiofficial" language. The new rule will allow Japanese employees to use their native language among themselves.

Shiseido's globalization began accelerating in 2016, when it set up regional main offices in the U.S., Europe and China. Half of the company's sales now come from overseas.

Communicating in English is becoming unavoidable at the cosmetics maker's Japan operations, which are handling a growing number of foreign tourists and overseas customers who shop online.

Shiseido has set a nonbinding target for all its employees: achieving a TOEIC English proficiency score of 730, a level at which everyday conversations are easily managed.

The company will shoulder all the expenses of English lessons for those wishing to take classes.

It also wants its employees to relax. "Not everyone has to be able to speak like native English speakers," President Masahiko Uotani said.

The company considers the language policy a step toward "becoming the top cosmetics maker in Asia," as spelled out its management vision through 2030.

Honda Motor plans to make English its official language by 2020. In global meetings, speakers will be required to use English. In addition, emails sent across a region will have to be in English. In the future, Honda plans to make promotions conditional on one's English abilities.

Corporate Japan's first converse-in-English movement hit in 2010, when Rakuten and Fast Retailing, both aggressively expanding their overseas operations, declared they would switch their official language in 2012.

The results have been mixed. 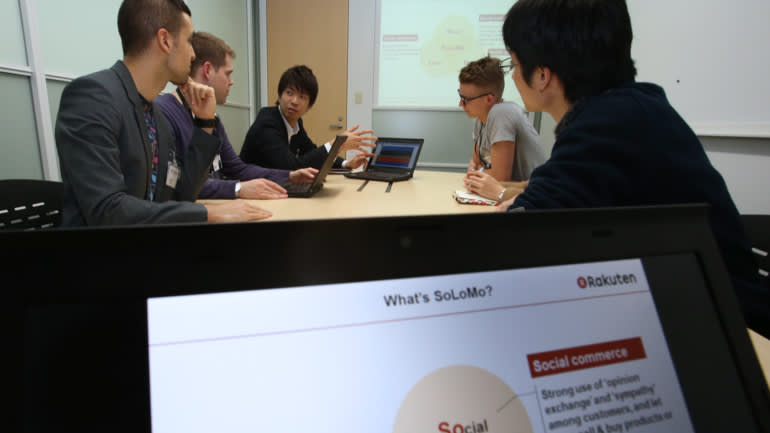 Rakuten employees' average English proficiency has soared since 2012, but the company has lost some valuable workers since it made English its official language.

Chairman and CEO Hiroshi Mikitani credits the policy with allowing Rakuten, known for its online shopping platform, for being "able to assemble talented personnel from abroad."

But there has been a negative side to obliging managers to obtain certain test scores and recommending that all conversations be held in English: Some middle-aged and older employees came to believe that good English was a prerequisite to moving up the company ladder and took their careers elsewhere.

Recently, Rakuten began allowing employees to use Japanese or English based on the situation.

Fast Retailing, known for its Uniqlo stores, also mandated certain TOEIC scores, mainly for managers, but has not demoted or otherwise punished those who have failed to meet the requirement.

Sato Holdings, a maker of label printers, in 2013 announced that English would be the company's official language. The goal was for all employees to score 571 on an online proficiency test known as the CASEC. That result is considered equivalent to a 500 on the TOEIC. There was also a deadline -- 2020.

But the company has since had second thoughts.

"We are planning to set different targets depending on one's assignment," a Sato Holdings official said.

Companies are launching organizationwide attempts to improve employees' English skills while avoiding the side effects that Rakuten provoked, like undermining the motivation of less bilingual employees.

For now, Shiseido and Honda will not negatively evaluate personnel who fail to reach English proficiency targets.

South Koreans' average TOEIC score was 676 that year. In China, the average was 600.

Switching the workplace language to English carries risks, like widening the generation gap.

An official of Tryon, which provides corporate English lessons, said 20-somethings make up the largest percentage of people who score 600 or higher on the TOEIC. At some companies, twice as many employees in their 20s reach this level than employees in their 40s.

This shows that younger employees have reaped the benefits of Japanese schools' beefed-up English curriculum.

Japanese companies find themselves in something of a dilemma. The global economy insists that they boost their international competitiveness. Packing their ranks with English speakers would go a long way in this regard. At the same time, however, they are dealing with a labor crunch at home and cannot afford to scare off employees by making them speak unfamiliar languages.

The solution is to offer workers continuous training and support.